Where has the time gone.

In my absense, it looks like other people have flourished, but now I think it’s time to make a return and this time for good.

What better way to mark my return than to show and talk about the first official full-length trailer for what could be one of the more divisive horror remakes set to arrive in a couple months.

I am talking about Suspiria by Italian filmmaker Luca Guadagnino (Call Me by Your Name, A Bigger Splash and I Am Love). The original film by Italian giallo maestro Dario Argento many horror fans consider a great example of the Italian giallo of the late 70’s and early 80’s. Just like most fandoms, whenever there’s talk about one of the classics being remade there’s levels of trepidation, anger and guarded optimism.

While I’m never one to look at remakes as ruining the originals. IF that was the case then we wouldn’t have excellent horror remakes such as Carpenter’s The Thing and, to an extent, Zack Snyder’s Dawn of the Dead.

While I’m excited to see what Guadagnino brings to the table when it comes to his remake of Suspiria, I am also somewhat guarded in that the original film was such a surreal experience that remaking it note for note wouldn’t add anything new to the experience.

Here’s to hoping this is one horror remake that falls under the great side of the equation instead of the trash end.

Two of my favorite films of all-time happen to be very similar. In fact, one could say that they’re pretty much the same films. I’m talking about Akira Kurosawa’s Seven Samurai and it’s Western-remake by John Sturges, The Magnificent Seven. Kurosawa’s film is one of the greatest films of all-time and it’s no wonder that many have taken the film’s story of the downtrodden hiring a band of misfits, rogues, but still honorable men to help them fight against huge odds.

One such film that tries to add onto Kurosawa film’s legacy was the Roger Corman-produced scifi-adventure film Battle Beyond the Stars. This 1980 film was one of Corman’s many attempts to cash-in on the Star Wars phenomena, but in his usual low-budget style.

For a low-budget scifi film, Battle Beyond the Stars happened to have quite a cast one doesn’t usually see in such productions. While it had such grindhouse and exploitation regulars as John Saxon and Sybil Danning, it also starred the wholesome Richard Thomas from The Waltons and George Peppard (who would later become famous with a new generation as Hannibal Smith of The A-Team). The film would be directed by Jimmy T. Murakami, but from watching the film one could see Corman’s fingerprints all over the production from the script which was pretty lean and cut to the basic outline of Kurosawa’s original film. There’s not much fluff to bog down the pacing of the film.

This film has always been a guilty pleasure of mine because it so resemble Seven Samurai and The Magificent Seven, but adds in it’s own unique style and look to a well-worn and well-trodden plot. It was much later that I found out that James Cameron had a major hand in the special effects work in the film. Think about that for a moment. The self-proclaimed “King of the World” who literally breaks film budget records every time he begins work on a film did FX work on battle Beyond the Stars whose effects budget probably wouldn’t buy a day’s worth of crafts table eating for his most modestly budgeted films.

Lisa Marie always loved to say that grindhouse and exploitation films are some of most honest films out there. There’s no bullshit to what we see on the screen. It’s filmmakers forced to be daring and inventive because the lack of resources forces them to think outside the box. Battle Beyond the Stars might be seen as a mediocre attempt to cash-in on a scifi cultural phenomena, but it does so with a go for broke mentality that makes it such a fun film to watch. It’s not the greatest thing Corman has ever produced and some would even call it a very bad film, but once one looked past it’s rough and flawed surface then one could see a gem in the rough hidden beneath.

Lucky McKee is one of my favorite horror filmmakers since I first saw his 2002 film May. I’ve followed his career since and last year he premiered his latest horror film during the 2013 Toronto International Film Festival.

All Cheerleaders Die will have a limited release this summer and will most likely be available on Video On-Demand soon after. Whether I see it on the big-screen or in the comfort of my own home I know for a fact that my partner-in-crime, Lisa Marie, will be watching this as well. She won’t be able to resist after just seeing the title alone. It’s right up her wheelhouse, so to speak.

We are just a little over a month away from the release of the Gareth Edwards reboot of the classic kaiju film Godzilla.

As studios are now seeming to get into the habit to help build up the hype for their big tentpole summer releases we have a new extended trailer from Warner Bros. to remind everyone that the Big Guy is seriously in need of a Snickers bar.

While it’s still speculation and this extended trailer doesn’t really show any clues or evidence I still believe that this latest iteration of Godzilla will have him fighting another monster and/or monsters. 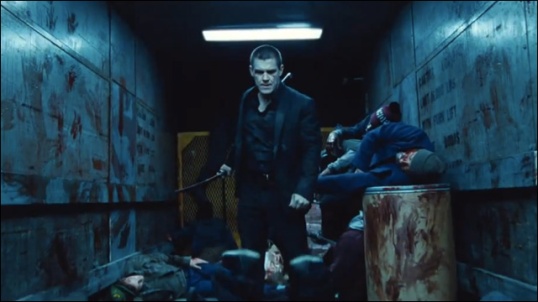 Today saw the release of the red band trailer for the remake of Park Chan-wook’s classic neo-noir Oldboy. This remake by Spike Lee already looks to pay homage (or imitate) the look and feel of Park’s adaptation of the Japanese manga of the same name by Garon Tsuchiya and Nobuaki Mineshigi. We see quick glimpses of the hallway fight scene and a montage of the main character’s 20 years spent locked up in an unknown hotel room.

There’s a great chance for Spike Lee to make this remake his very own by using the Park film as a template but not as gospel. The Park adaptation itself took some liberties with the story told in the manga. Lee and the screenplay by Protosevich could do same to allow this Oldboy a chance to stand on its own instead of becoming another Gus Van Sant Psycho.

Though I wouldn’t mind to see what Lee has in mind as Josh Brolin’s character’s first choice of a meal once getting out.

I can hear the howls now. Not another horror remake and one of a classic in the genre that many fans consider one of the holy grails of horror cinema. Guess what I say to those people. SHUT THE FUCK UP!

With the complete blessing from both Sam Raimi and Bruce “Who is God when he wants to walk amongst his creations” Campbell and them back but in the role of producers and mentor to the remake’s director, Fede Alvarez, and the young ensemble cast I have much more faith with this particular horror remake than others of its kind.

The trailer itself looks to go on the far extreme on the horror side of the original. I didn’t get a sense of much of the black humor of the original film (and it’s subsequent semi-remake), but I think that’s a good thing. Why remake a classic beat for beat when one can go their own way and explore something even the original never did.

Evil Dead lands it’s bloody, possessed corpse on everyone this April 12, 2013. Until then…. 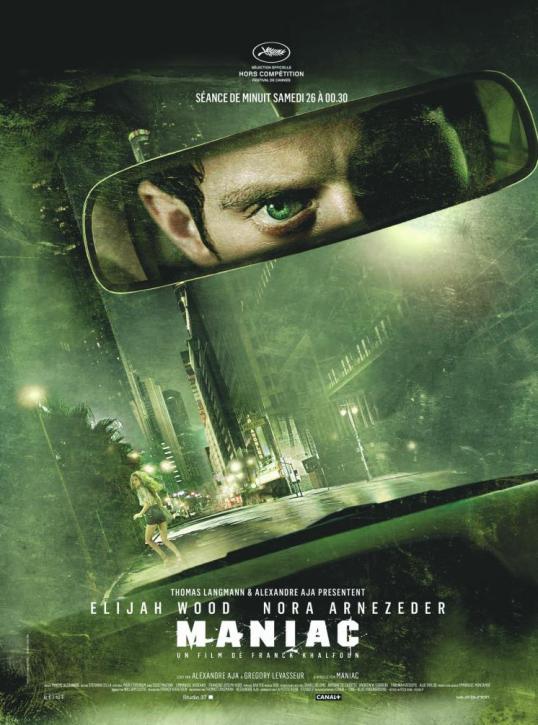 There was one film that had caught my interest once the project was announced in late 2011. The film was going to be the horror remake of the classic, grindhouse slasher flick from 1980 called Maniac. This film is considered by many fan of the grindhouse and exploitation scene as a classic in the slasher genre. It was also hailed by many moral groups as a prime example of how horror cinema was beginning to reach “pornographic levels of violence” especially towards female victims.

So, it was quite an interesting bit of news when the remake was announced and Frodo Baggins himself would take on the role of the film’s serial killer in Frank. It was an inspired bit of casting that gave the film’s early production a much needed boost in interest. It’s now been over a year and the film has made the genre film festival circuits and the buzz surrounding the Franck Khalfoun-directed film is that it more than lives up to the grindhouse and exploitation aesthetics of the original while bringing in a fresh new stylistic take on the slasher genre.

We have below is the first 6 minutes of the Maniac remake and one can see how creepy the POV-style the filmmakers are going to take for the film has turned out.