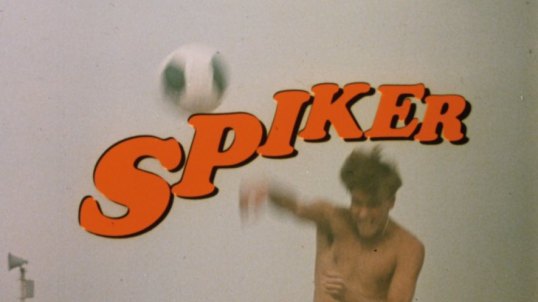 The 1985 film, Spiker, is an attempt to make an exciting movie out of the one of the most boring sports in the world, men’s volleyball.  Not only does the film attempt to make volleyball look exciting but it attempts to do it on absolutely no budget.  Anyone who doesn’t appreciate the combination of guts and foolishness necessary to even attempt this is not a real film fan.

Spiker follows a group of college volleyball players as they train to qualify for the Olympics.  Or, at least, that’s what I think is supposed to be going on.  The plot is really difficult to follow, not because it’s complex but just because it’s volleyball and who cares?  We learn that the coach of the team (played by Michael Parks) is a tough taskmaster.  We learn that one of the players needs to get his act together and be more mature.  We learn that another member of the team has a wife who is jealous of all of his volleyball groupies.  Eventually, the team competes in Japan and Poland.  In Japan, the teammate who needs to get his act together gets drunk and wanders around with two prostitutes.  Poland, meanwhile, is represented by a high school gym and four women doing the polka.  One Polish woman asks a member of the team to smuggle out some letters.  Which he does.  Yay.  Exciting.

As I said, there’s a lot of volleyball in Spiker but you’re never really sure if the American team is winning or not.  Unless it’s being played on a beach and everyone’s wearing a skimpy bathing suit, volleyball is a thoroughly uncinematic sport.  I mean, what do you think of when you think about volleyball in the movies?  You think about Carrie White not hitting the ball and then burning down the school.  What you don’t wonder is, “I wonder who was winning when Carrie missed that hit?”

What makes Spiker a pleasure is it’s determination.  The film is truly convinced that it can somehow make volleyball exciting and you have to admire it for being so sure of itself.  It’s kind of like those people who spend night after night in Marfa, waiting for the UFOs to arrive.  They may be crazy but you can’t help but admire their dedication, even while you’re laughing at some of the absolutely atrocious dialogue.

The other thing that makes Spiker a guilty pleasure is the extremely intense and almost unhinged performance of Michael Parks at the volleyball coach.  Parks plays the coach as being tough-as-nails and always in a bad mood.  The film’s best scene features him throwing volleyball after volleyball at a player who has displeased him.  Parks does so with a look of grim determination on his face, the sign of a dedicated method actor giving it his best even in a B-movie that he probably agreed to do because he needed to pay the rent.  What makes Parks’s performance so memorable is that he never really seems angry.  Instead, he just seems to be perpetually annoyed and that makes him all the scarier.  Anger, after all, passes.  Annoyance is forever.

Spiker is a bad film but it’s endlessly watchable precisely because it so misjudged.  You can’t help but find both it and Michael Parks’s performance to be oddly fascinating. 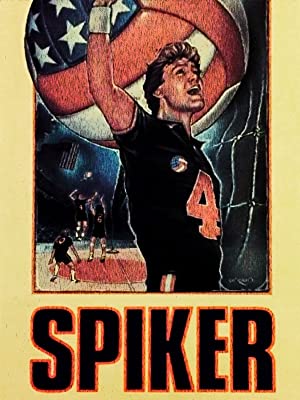 3 responses to “Guilty Pleasure No. 46: Spiker (dir by Roger Tilton)”