Hi, everyone!  Well, I just watched Sharknado 4 twice and I live tweeted it both times!  You can expect to see my review either tomorrow or on Tuesday, depending on how well I recover from tonight.

I hope everyone’s had a great July and I hope that August will be even better!

(Oh, at around the 18 second mark, the picture appears to freeze but don’t panic.  That’s a glitch in the upload and it only lasts for a second or two.)

As a long-time fan of Blade Runner-esque dystopian sci-fi, the premise behind writer/artist/letterer/colorist Raffaele Ienco’s new Top Cow/Image series Mechanism sounded right up my alley — sometime in the not-too-terribly-distant future, a reptilian race of flesh-eaters referred to by the besieged populace of Earth as “Geckos” have descended upon us from above with a view toward turning the planet into their personal larder, and in response such humans as still remain have constructed a shit-ton of militarized robots to fight off the marauding lizard-men. Results have been decidedly mixed, however, and now a new “leaner, meaner” — and hopefully smarter — prototype has been sent into the field well before it’s probably ready, and it’s up to a pair of cops who well and truly don’t seem to like each other very much to show their new mechanical “pal” the ropes while it just sits (or stands) there, quietly… 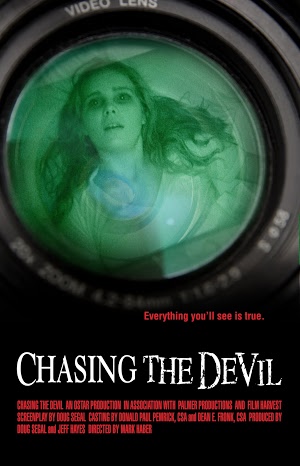 As recent reviews on this very site have shown, finding a hidden gem among the low-budget “found footage” horror offerings on Hulu can indeed be exhausting work — but the good news is that sometimes it pays off. For awhile, at any rate. Which isn’t to say that the film under our metaphorical microscope this evening, 2014’s Chasing The Devil (which I’m given to understand is soon to see release on DVD — though not on Blu-ray, go figure), is in any way a masterpiece or anything, but it does manage to stand out more than a bit among its competitors, and after several evenings of cinematic near-torture, I think my mental faculties have been whittled down to the point where that is, perhaps sadly, good enough for me.

Our particulars for this one go as follows : actor Patrick McCord (played by Tim Phillipps) isn’t buying that his sister…

Under normal circumstances, a “found-footage” horror flick made by an amateur writer/director with an unprofessional cast for $6,000 (drummed up by means of a Kickstarter campaign, no less) in rural Ohio is something that I’m gonna root for. Tell me that it was shot in 2014 and still hasn’t even managed to find its way onto even DVD, much less Blu-ray, and I’ll be doubly interested. But at the end of the day, some films remain undiscovered for good reason, and Anthony Daniel’s Spirit In The Woods — which is now streaming free on Hulu and for a few bucks on Amazon — is definitely one such effort.

At its core, what we have here is a barer-than-bare bones Blair Witch Project rip-off that seems to think that if you just strip-mine that premise off all suspense, intrigue, characterization, and cleverness, you’ll somehow come out with something watchable at the…

Having had some pretty good luck with European low-budget “found-footage” horror recently thanks to the rather splendid German indie effort Die Prasenz (or The Presence, if you prefer), I decided to give 2015 UK import The Cutting Room a go when I saw it available for streaming on Hulu (it’s also available on Blu-ray and DVD depending on where you live) just to see if there might be a trend brewing across the pond when it comes to breathing new life into this much-maligned genre. A spot of quick reading beforehand revealed that writer/director Warren Dudley got this thing in the can for the paltry sum of 12,ooo pounds, further piquing my interest, and reviews, while far from great on the whole, seemed to at least be mixed enough to offer some hope. Odds are I wouldn’t be walking into a classic here by any means, but what the…

So, I just finished watching Thank God, It’s Friday, a movie from 1978.  It’s an episodic comedy, one that follows a group of genuinely unlikable characters as they all gather in one genuinely unlikable location and proceed to have some fairly generic experiences.

In fact, everyone in the movie is looking for love!  Except for Jeff Goldblum!  He just wants to get laid.  He manages the club where everyone has gathered on this particular Friday.  He’s a womanizer.  We can tell because he wears a red jacket and his shirt is half-buttoned.  Goldblum decides that he wants to break up the married couple.  Boo!  Hiss!  But wait a minute — neither the husband nor the wife are likable or interesting.  Go, Jeff, go!  BREAK UP THAT BORINGASS MARRIAGE!

Oh!  And Nicole (Donna Summer) is wandering around the club too.  She wants a chance to perform but the DJ refuses to let her.  So, eventually, she just grabs a microphone and she starts to sing.  Luckily, the song she sings is Last Dance and, by singing it, she gives everyone an excuse to go home.  If you’ve ever been to a karaoke night, you know that, as soon as a drunk sings Last Dance, it’s time to pay the bill and get the Hell out of there.

Anyway, Thank God, It’s Friday is a really bad movie, one that is full of bad writing, bad jokes, bad performances, and indifferent direction.  It’s tempting to say that the music was really good but actually, we don’t hear much of the music.  The movie is often more concerned about what’s happening in the club’s parking lot than in what is happening (and being heard) on the inside.  We may not hear much music but we do get to see some pretty icky racial stereotyping and who would guess that a movie about disco would be so homophobic?

(We don’t see any cocaine, though I’m sure you could probably hear the key grip and the gaffer snorting a line off-camera if you listened closely enough.  A lot of the cast looked pretty wired.)

ANYWAY — here’s the important thing about Thank God, It’s Friday.  Occasionally, I’ll watch a movie like Dazed and Confused or Boogie Nights or Saturday Night Fever and I’ll get jealous because I know that I’ll never get a chance to experience the 70s first hand.  Fortunately, something like Thank God, It’s Friday will always be around to reassure me, “No, Lisa.  The 70s sucked!”

No, thank God the movie’s over.

Actually, you know what?  I can’t end this review without sharing this film’s trailer:

Oh well!  Sing us out of here, Donna!


Lisa has subjected herself to many shark movies during the past week. I thought it was only appropriate to end July with a music video featuring a shark. It also happens to be one of the most bizarre music videos I have ever sat through. I guess it makes sense. Director Francis Delia also did Mexican Radio for Wall of Voodoo and Somebody’s Watching Me for Rockwell. No, this music video is weirder. It’s appropriate that this music video was released the year I was born. I do love the weird, and I am an odd duck.

How many music videos do you know that open with a human wearing a pterodactyl head while riding on a unicorn? It then cuts to the titular shark. What follows seems to be a modern day tortured noir-ish character who also goes through a last temptation of Christ situation, which includes the creepy head of an Asian girl coming out of a pot. This scene also comes complete with women who I’m pretty sure were borrowed from the set of She (1982).

However, that’s not all that happens. What is with the scene where he chases after the woman in the field, catches her, and she turns into a goat? That’s immediately followed by him seeing the ghost of a woman in his motel bed with his gun pointed at her.

In the end, he releases a dove. Why? Does it mean he has made peace with himself? That’s my best guess.

I can at least say this. I’m quite sure that the “Shooting Shark” refers to a comet. I’m also pretty sure The Man Who Laughs (1928) makes a cameo appearance.

One could dissect this music video scene by scene, but I won’t. Just watch it. It will only cost you about five minutes, and is well worth the odyssey it provides. Then come back to get a prescription for that nasty cowbell fever you are having right now.