Whether he was appearing in a western, a spy film, a war film, a comedy, or a dark drama, James Coburn was one of the coolest and most underapperciated actors around.  He made bad films tolerable and good films even better.  Regardless of the role, Coburn brought his own unique style to each and every performance.  He was born 92 years ago today in Nebraska so here are just four of the films from his legendary career. 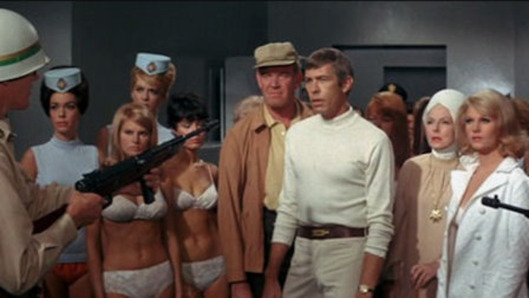 A Fistful of Dynamite (1971, directed by Sergio Leone) 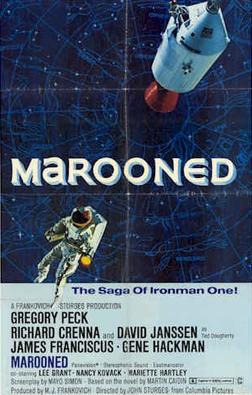 Imagine The Martian or Apollo 13 without any humor or narrative momentum and you’ve got an idea what Marooned is like.

Three American astronauts (played by Richard Crenna, Gene Hackman, and James Franciscus) are returning to Earth after serving on an experimental space station when the engine to their spacecraft fails.  Now stuck in orbit around the Earth, they only have two days before they run out of oxygen.  While flight commander Crenna tries to keep everyone calm and make sure that all the proper procedures are followed, Gene Hackman yells at NASA and demands to be rescued.

Down on Earth, the head of NASA (Gregory Peck) says that there’s nothing that can be done.  There’s no way to get a rescue mission set up quickly enough to save the lives of the astronauts.  Both the President and David Janssen disagree with him.  Janssen demands to be sent into space immediately, regardless of the dangers, so that he can bring America’s astronauts home.

Marooned is a painfully slow movie that went into production at the height of the space race and which was released just a few weeks before the first successful moon mission.  Because it was made at a time when there were still many who claimed that NASA was a waste of money, the movie goes out of its way to explain that, even though the astronauts are probably going to die in space, NASA is in no way to blame.  Richard Crenna absolves NASA of blame after being told that a rescue mission isn’t feasible.  Gregory Peck holds a press conference, where he gives a lengthy speech about why space exploration is still important.  The movie is very detailed in showing that NASA is staffed by personality-free professionals, which might have boosted confidence in NASA but which also leads to a dull story.  You’ll notice that I haven’t referred to anyone in this film by the names of their characters.  That’s because their names don’t matter because, other than Gene Hackman and David Janssen, none of them is really distinguished by any sort of identifiable personality.  Hackman chews the scenery while Janssen plays another surly character who seems like he has a permanent hangover.  I wouldn’t trust Janssen to pilot a spaceship.

Marooned won an Oscar for its Special Effects, which were probably impressive back in 1969 but which are dull by modern standards.  Winning that Oscar meant that Marooned would eventually earn the distinction of being the only Oscar winner to be featured on Mystery Science Theater 3000.  On MST 3K, it aired under the title Space Travelers, which is a perfectly generic name for a perfectly generic film. 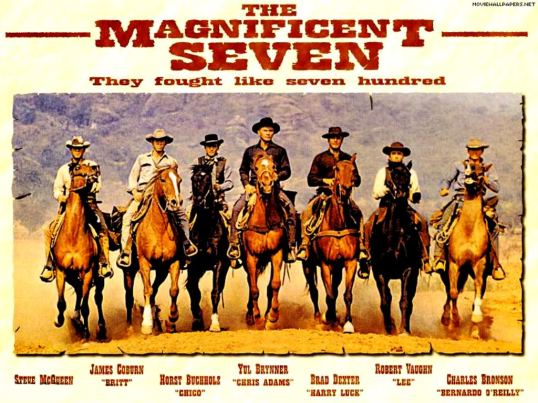 There’s a large hue and cry about the upcoming remake of THE MAGNIFICENT SEVEN (and remakes in general) among classic film fans. “How dare they”, it kind of goes, “Why, that’s blasphemy!”. The truth is, Hollywood’s been cannibalizing itself since almost the beginning, and remakes have long been a staple of filmmakers. THE MAGNIFICENT SEVEN is a remake of Akira Kurasawa’s Japanese film SEVEN SAMAURI, moved to the American west by producer/director John Sturges . And while quite frankly most remakes can’t hold a candle to the originals, this 1960 action epic can stand on it’s own as one of the great Western adventures.

Sturges assembled a macho cast to tell the tale of bandits terrorizing a small Mexican village, and the seven hired guns who take on the job of defending them. Top billed is Yul Brynner as Chris, the black clad gunslinger who puts together the crew. First among them is

I think it’s becoming a sort of unofficial tradition to celebrate a particular film legend’s birthday using the 4 Shots From 4 Films series as platform to showcase these individuals best and lesser-known films.

Today, we focus and celebrate what would’ve been the 93rd birthday of one Charles Dennis Buchinsky. That name may not resonate to the csual film fans, but I’m sure his chosen professional moniker will: Charles Bronson.

Charles Bronson was part of that group of actors during the 60’s and 70’s who epitomized the macho and badass personality on the big-screen. Bronson’s legacy has lived on through such classic films as The Magnificent Seven, The Dirty Dozen and Once Upon A Time In America right up to his more lesser-known films such as Hard Times, Telefon and Death Hunt. 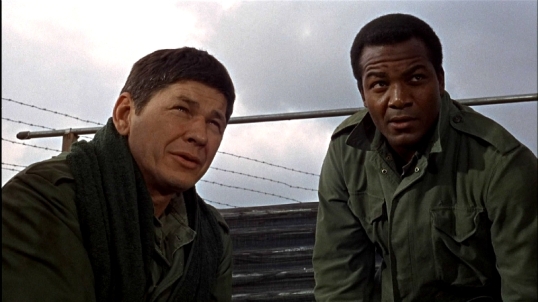 Once Upon A Time In the West (dir. by Sergio Leone)

John Wayne didn’t get off his horse very often in the latter part of his career. The Duke hadn’t done a non-Western since 1969’s HELLFIGHTERS, but cop pictures were in style in the early 70s due to the success of movies like THE FRENCH CONNECTION and DIRTY HARRY. Wayne was actually offered the part of Dirty Harry Callahan and turned it down. But in 1974, Big John traded in his horse for a Pontiac Firebird in the action packed MCQ, directed by veteran John Sturges (GUNFIGHT AT THE OK CORRAL, THE MAGNIFICENT SEVEN, THE GREAT ESCAPE).

Wayne plays tough cop Lon McQ, who quits the force to investigate the murder of his former partner. He gets tangled up with drug dealers and corrupt officials, car chases and shootouts. Sound formulaic? It is, but the action scenes make up for a lame script. Duke basically plays the same character he did in most all his films, tough but tender, fair but firm. It’s kind of jarring to see Wayne in his (pretty bad) hairpiece instead of the usual cowboy hat, and tooling around the streets of Seattle in a muscle car rather than the dusty trail on his horse. He’s surrounded by a supporting cast full of familiar faces (Eddie Albert, Diana Muldaur, Colleen Dewhurst, Al Lettieri, David Huttleston, Clu Gulager), all of whom do their best with the clichéd script. MCQ plays like a TV movie of the week, which isn’t necessarily a bad thing, and fans of 70s action flicks will dig it.

John Wayne only made three more films after MCQ, including another cop movie, BRANNIGAN, and his swan song, 1976’s THE SHOOTIST, before succumbing to cancer in 1979. The Duke made much better movies then MCQ, but for a look at the star without his spurs and six-gun,  it’s definitely worth watching.

(This post originally appeared, in slightly altered form, on the 2015 TCM Summer of the Stars Blogathon, hosted by Journeys in Classic Film)

Two of my favorite films of all-time happen to be very similar. In fact, one could say that they’re pretty much the same films. I’m talking about Akira Kurosawa’s Seven Samurai and it’s Western-remake by John Sturges, The Magnificent Seven. Kurosawa’s film is one of the greatest films of all-time and it’s no wonder that many have taken the film’s story of the downtrodden hiring a band of misfits, rogues, but still honorable men to help them fight against huge odds.

One such film that tries to add onto Kurosawa film’s legacy was the Roger Corman-produced scifi-adventure film Battle Beyond the Stars. This 1980 film was one of Corman’s many attempts to cash-in on the Star Wars phenomena, but in his usual low-budget style.

For a low-budget scifi film, Battle Beyond the Stars happened to have quite a cast one doesn’t usually see in such productions. While it had such grindhouse and exploitation regulars as John Saxon and Sybil Danning, it also starred the wholesome Richard Thomas from The Waltons and George Peppard (who would later become famous with a new generation as Hannibal Smith of The A-Team). The film would be directed by Jimmy T. Murakami, but from watching the film one could see Corman’s fingerprints all over the production from the script which was pretty lean and cut to the basic outline of Kurosawa’s original film. There’s not much fluff to bog down the pacing of the film.

This film has always been a guilty pleasure of mine because it so resemble Seven Samurai and The Magificent Seven, but adds in it’s own unique style and look to a well-worn and well-trodden plot. It was much later that I found out that James Cameron had a major hand in the special effects work in the film. Think about that for a moment. The self-proclaimed “King of the World” who literally breaks film budget records every time he begins work on a film did FX work on battle Beyond the Stars whose effects budget probably wouldn’t buy a day’s worth of crafts table eating for his most modestly budgeted films.

Lisa Marie always loved to say that grindhouse and exploitation films are some of most honest films out there. There’s no bullshit to what we see on the screen. It’s filmmakers forced to be daring and inventive because the lack of resources forces them to think outside the box. Battle Beyond the Stars might be seen as a mediocre attempt to cash-in on a scifi cultural phenomena, but it does so with a go for broke mentality that makes it such a fun film to watch. It’s not the greatest thing Corman has ever produced and some would even call it a very bad film, but once one looked past it’s rough and flawed surface then one could see a gem in the rough hidden beneath.