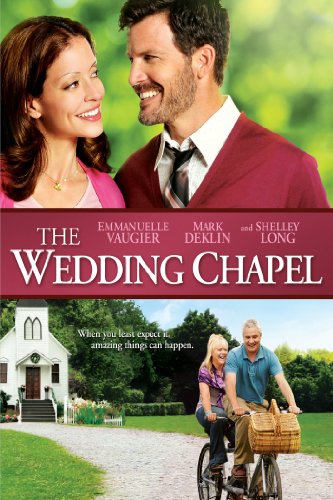 Sarah (Emmanuelle Vaughier) is a painter who is frustrated because, despite her obvious technical skills, her work still lacks the spark of passion and imagination that it needs to be truly special.  Not only is her first show panned by a snooty art critic but her boyfriend dumps her on the same night!

Jeanie (Shelley Long) is a widow who is still adjusting to life as a single woman.

They are mother and daughter and together …. THEY SOLVE CRIMES!

No, actually, they don’t.  (Though I will say that I think a film or a show or a series of books about a mother/daughter crime solving team would be great and I’m a bit shocked that there aren’t more of them out there.)  Instead, what Sarah and Jeanie do is they return to the small town where they once lived.  It turns out that greedy developers want to tear down the family home. It’s all about eminent domain, which is a totally evil thing that should be condemned more frequently in the movies.

Anyway, it turns out that it’s not just the family home that’s due to be demolished.  The developers are also planning on tearing down the nearby chapel.  While Jeanie’s busy having flashbacks to her teenage years, Sarah’s getting involved in trying to save both the chapel and the house!  Helping out Sarah is a local politician and lawyer with the unfortunate name of Roger Waters (Mark Deklin).  Not helping Sarah is the local sheriff, who keeps arresting Sarah, tossing her in jail, and forcing her to wear one of those really unflattering orange jumpsuits.  Roger bails Sarah out so many times that he soon finds himself falling in love with her.  Sarah, however, doesn’t want to get tied down in a small town.  She has an artistic career to pursue, assuming that she can get in touch with her emotions.

Speaking of love, Jeanie is haunted by memories of her ex-boyfriend, Larry.  As far as Jeanie knows, Larry left for Vietnam and never returned.  She’s always assumed that he must have died during the war but what if …. well, let’s say that he didn’t die in the war.  And what if Larry (Barclay Hope) just happens to be living in that small town?

Oh my God, love’s all around!

First released in 2013, The Wedding Chapel is an exceedingly pleasant film.  Seriously, almost everyone in the film is extremely considerate and nice.  Even the oafish sheriff doesn’t mean to be a jerk.  He’s just doing his job.  Sarah attempts an act of civil disobedience but it’s literally the most mild protest that you could imagine.  This is the type of movie where everyone lives in a nice house and every lawn is perfectly manicured.  Even the abandoned buildings are surrounded by freshly cut grass.  The chapel may be deserted but you’d never know it from looking at it.

It’s a thoroughly predictable movie but, at the same time, it’s too good-natured to be disliked.  No one curses.  No one makes any racy jokes.  This is the type of movie that you could safely recommend to your great-grandmother without having to worry about her getting mad at you afterwards.  Emmanuelle Vaughier gives a pretty good performance as Sarah and director Vanessa Parise does what she can to keep the film from drowning in sentiment.

Since the Halloween season is upon us and this site is going to be 90% horror for the rest of October, I decided that the final movie I would watch in September would be the least terrifying film I could find.  The Wedding Chapel filled that role well.

On this date, 64 years ago, James Dean was killed in a tragic car accident.  At the time of his death, he had already filmed East of Eden, Rebel Without A Cause, and Giant.  East of Eden would be the only one of his starring roles that Dean would live to see.  Dean went on to be nominated for two posthumous academy awards and, in death, he became an icon that will live forever.

If James Dean were still alive today, he would be 88 years old.  Would he still be acting?  It’s hard to say, of course.  Some actors retire and some don’t.  (Robert Duvall, for instance, is 88 and still doing films.  For that matter, Norman Lloyd is 104 and apparently still reading scripts.)  If Dean were alive today, he wouldn’t be that much older than the stars of The Irishman.

In honor of James Dean’s career and his legacy, here are…. 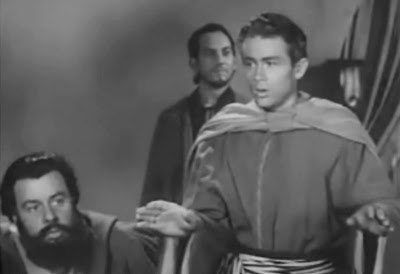 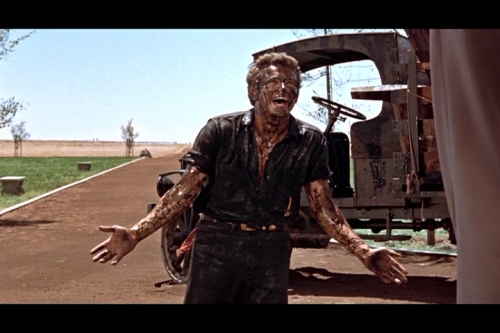 This is the latest of several adaptations of H.G. Wells’s classic tale about Martians invading Earth.  What sets this one apart from some of the others is that 1) it’s set close to the time period that the novel was originally written (the novel was published in 1898 and the new miniseries takes place during the Edwardian era so it’s only a difference of a few years) and 2) it takes place in the country where the novel is actually set.  In other words, the Martians have arrived and it’s up to the British to save us all!

Well, maybe.  Not to spoil the book but let’s just say that humanity didn’t do a very good job when it came to defending Earth from the Martians.

Anyway, this is a 3-episode miniseries which will air on the BBC sometime in the autumn.  (Hopefully in late November or early December, hint, hint.)  Eventually, I imagine that viewers in the States will get to see it.

For now, here’s the trailer!


Saturday was my sister Melissa’s birthday!  This is her favorite Radiohead song and I have to admit that I like it a lot as well.  I’m also a huge fan of this video.

But you know who reportedly does not care much for this song or this video?  Thom Yorke.  The leader singer of Radiohead has called the song “very bad” and apparently, it was only released because the band was being pressured by their label to release something with “commercial appeal.”  And I can understand why Yorke would by annoyed by that.  Certainly, the song is not as complex or enigmatic as other Radiohead songs.  It’s pretty simple by their standards.

But, I still like it.  If it’s a guilty pleasure, so be it.  It’s a song that you can sing along with and it just puts you into a certain mood and …. okay, I’m kind of starting to understand why Thom doesn’t care for the song.  It’s a good song but, outside of the melancholy tone, it doesn’t seem like a song that only could have come from Radiohead.  It’s a little bit generic when compared to some of the band’s other songs but it’s still definitely effective.  So if I ever meet Thom Yorke, I’ll probably keep my feelings about this song to myself.

(Either that or I’ll blurt out, “My sister loves High and Dry!  If I call her, will you sing it to her?!”  And then I’ll probably be escorted outside by security.)

I read that he also didn’t care much for this video.  Again, I have to disagree.  I like all the drama in the diner and I also like the fact that no one seems to notice either the car blowing up or the businessman getting murdered.  Instead, of everyone’s too busy in their own little world.

What a week!  Big Brother finally ended, Survivor started, and even better — it’s almost October!  The Annual TSL Horrorthon starts next week on Tuesday!  It’s going to be a blast and I hope you enjoy experiencing it as much as we’ve enjoyed putting it all together!

Just one more day to go…. 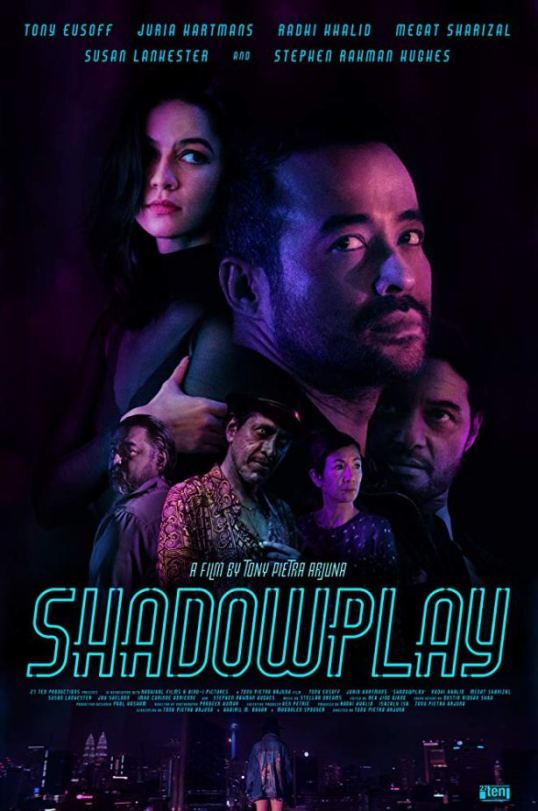 Described by writer/director Tony Pietra Arjuna as a “love letter to David Lynch,” 2019 Malaysian indie neo-noir thriller Shadowplay (now available to stream on Amazon and Vimeo — there’s probably a DVD and/or Blu-ray iteration to be found, as well, although I couldn’t comment on the specifics of such) certainly owes a stylistic debt to that eclectic auteur‘s work, particularly Mulholland Drive, but you’re likely to catch a fairly strong whiff of Gaspar Noe, Don Coscarelli, and even Orson Welles as the surreal, nearly free-associative narrative plays out herein, yet none of the heavy “borrowing” feels forced — nor, fortunately, does it prevent the end result from feeling reasonably fresh and original, if uneven.

Down-on-his luck P.I. protagonist Anton Shaw (played with a knowing wink and nod to classic cinematic gumshoes by Tony Eusoff) is haunted by incomplete memories of being kidnapped as a child — images of…


It looks like the world is ending again and just in time for the holiday season.

Rugged Robert Mitchum is pretty much the whole show in MAN WITH THE GUN, a film by first  time director (and Orson Welles protege) Richard Wilson. It seems a strange choice at this juncture of Mitchum’s career. He was just coming off four big films in a row (RIVER OF NO RETURN, TRACK OF THE CAT, NOT AS A STRANGER, NIGHT OF THE HUNTER ), then makes a low budget Western that harkens back to his days making ‘B’ Zane Grey Westerns at RKO. But that was Mitchum; always the maverick who did things his way. 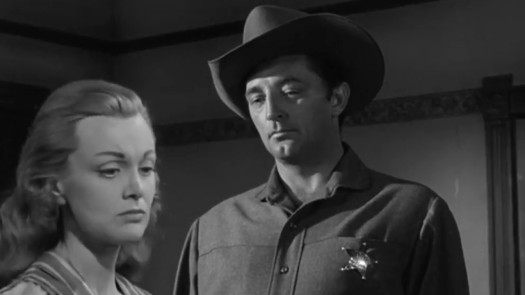 The film itself isn’t bad: Mitchum plays a notorious gunslinger, a “town tamer” hired by Sheridan City to clean things up from the clutches of boss ‘Dade Holman’ (who isn’t seen til the end, but whose influence is everywhere). There’s a subplot with his ex-wife Jan Sterling, now running the dance hall girls at…