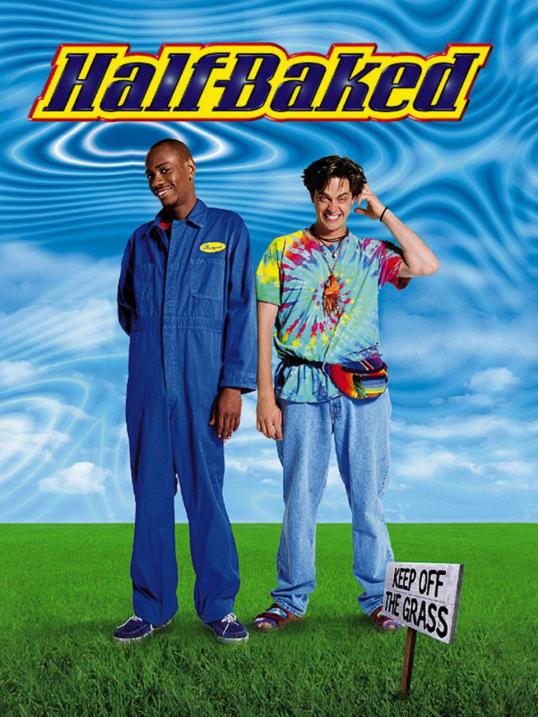 “Abba Zabba….You’re my only friend” — Thurgood

With the first month of January 2013 almost coming to an end I thought it was high time to introduce a new feature to the site. This one shall be called “Guilty Pleasure” and it will encompass all sorts of entertainment examples that I and those who on the site who wish to participate that they consider a personal guilty pleasure. It could be any film, music, book or games that one considers a personal favorite despite not being highly accepted by critics and the general population, at large.

The first entry to “Guilty Pleasure” is a stoner comedy that I always end up stopping whatever activity I’m doing at the moment to watch. I have it on DVD, will watch it on cable whenever it’s on and if a Blu-Ray version ever gets released I probably would buy it just to have it. This guilty pleasure film is 1998’s Half Baked starring Dave Chappelle and…well let’s just say all one needs to know is that it stars Dave Chappelle. It’s a mary jane flick that’s reached the levels of the Cheech and Chong flicks of the 70’s and 80’s.

My brother and I have seen this film so many times that we could quote scenes from it almost perfectly. I may not be quite the pothead that the characters in this film end up being, but anyone who has seen Half Baked knows at least one or two who fit the different type of stoners we find in it.

In the immortal words of Sampson Simpson: “YES! Cuban B!”

33 responses to “Guilty Pleasure No. 1: Half Baked”