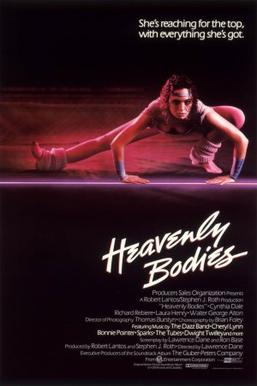 “She’s reaching the top …. with everything she’s got!”

That’s the tag line of the 1984 Canadian film, Heavenly Bodies.  It’s a perfectly vapid tagline for an entertainingly vapid movie.  It was on TCM last night and I just finished watching it.  It takes a lot to get me out of my horror film habit in October but how could I resist a movie about Canadian gym rivalries?

Now, even though this isn’t a horror film, it is a Canadian film from the 80s which means that it features a lot of performers who will be familiar to fans of old school slasher films.  For instance, the film stars Cynthia Dale, who was also in the original My Bloody Valentine.  Cynthia plays Samantha, an administrative assistant who quits her job and opens up her own independent gym, Heavenly Bodies.  Samantha is an aerobic dance instructor, perhaps the best in all of Ontario.  Samantha is also a single mother but there’s no better way to find a lover than to teach him aerobics.

Heavenly Bodies was also directed by a veteran of Canadian exploitation, Lawrence Dane.  Remember Happy Birthday To Me?  He plays the father in that movie.  I’d love to know the story of what led to Lawrence Dane not only directing but apparently also helping to write the script for a movie about an independent health club.  I mean, to go from working with David Cronenberg and winning Genie Awards to directing Heavenly Bodies seems like quite a career trajectory.  As a sidenote, how much more interesting would Heavenly Bodies be if it had been directed David Cronenberg?  I imagine that all the leg cramps would be a bit more graphic.

Samantha is selected to host her own exercise show on Canadian TV and a bigger Canadian gym decides that the only way to deal with this upstart is to destroy Heavenly Bodies by buying out their lease …. or something.  To be honest, I really couldn’t follow half the plot of Heavenly Bodies.  I just know that there was a lot of dancing and lot of exercising and a lot of shots of Samantha walking around Toronto.  The film came out a year after Flashdance and all of the scenes of Samantha walking around the city are basically filmed in exactly the same way as the shots of Jennifer Beals walking around Pittsburgh.  (There’s even a scene where Samantha stands in front of a poster for Flashdance, trying to convince people to join her gym.)  Whereas you kind of admired the way that Jennifer Beals handled herself on the dangerous streets of Pittsburgh, you never really worry about Samantha because …. well, it’s Toronto.  As I watched the film, I started to think about the fact that Canada consistently sends its best actors to the U.S. while those of us in the States consistently send our bad movies up north.  I’m not sure if that’s really a fair trade.

Anyway, the two gyms decide to settle their differences with an exercise marathon that is televised on Canadian TV.  (I’m going to assume that the film takes place in-between hockey seasons.)  Basically, the exercise marathon is one of those things where you have two teams and everyone just keeps exercising until they drop.  The last person standing is the winner and their gym gets …. I don’t know, bragging rights?  I mean, I’m not even how they were able to convince anyone to put an exercise marathon on TV.  I guess it was an 80s thing.

Can you guess who wins the exercise marathon?

Listen, Heavenly Bodies is technically a bad movie but I still like it because there’s a lot of dancing and everyone in the cast is so enthusiastic about whatever it is that they think they’re doing.  There’s something to be said for enthusiasm.  Add to that, the exercise marathon just has to be seen to believed.  This is a film of the 80s and its Canadian to boot so how can it not be a guilty pleasure of sorts?