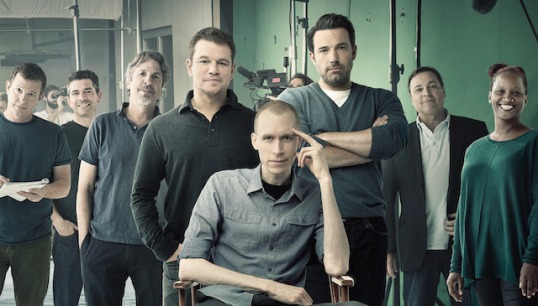 Project Greenlight may be the most guiltiest pleasure to be found on television right now.

The show, which is currently airing its fourth season on HBO, was one of the earliest reality shows.  The concept behind the show is deceptively simple.  Every season, Ben Affleck and Matt Damon have held an online competition for aspiring filmmakers.  The winner of the contest gets to direct a feature film, with the understanding that there will be TV cameras present to record every decision, argument, and screw up.  At the end of the season, the film is released and hopefully, a major new filmmaker is discovered.

The pleasure part is obvious.  If you’re like me and you love movies, there’s no way you can’t be fascinated by the chance to go behind-the-scenes of an actual production.  It’s always fun to watch as the director struggles to maintain his (so far, all of the directors have been male) vision against the whims of studio execs who, often time, seem to be annoyed by the director’s very existence.

As for me, I’ve always been fascinated by the casting process.  (Don’t believe me?  Check out this post that I wrote about The Godfather.  And then check out this one too!)  My favorite part of Project Greenlight is always the episode that deals with the casting.  I love seeing who auditions, who gets turned down, and who decides that they want nothing to do with the film.  It’s a lot of fun!

As for the guilty part of this guilty pleasure, it comes from knowing that a show like this thrives on conflict.  As much as Ben and Matt may say that they are only interested in selecting the most talented director, it’s also obvious that the director they pick has to make for good television.  If production on the film goes smoothly, that’s good for the film but it’s not necessarily good for the show.  That’s just the truth when it comes to reality television.

Hence, watching Project Greenlight always leads to conflicting emotions.  On the one hand, you want the movie to turn out to be a good movie.  You want the director to be up to the task.  On the other hand, you’re specifically watching this show to watch the director screw up and make mistakes and piss people off and get into fights.  Gossip lovers that we are, we love the behind the scenes drama but it’s rare that drama actually leads to a good film.

Season 1 started way back in 2001!  (Both this season and season 2 are available on DVD and I recommend checking out both of them.)  The winner was Pete Jones, a friendly nonentity who went on to direct the extremely forgettable Stolen Summer.  There was a lot of behind-the-scenes conflict, mostly due to a clash of personality between certain members of the crew.  From the minute the season started, it was obvious that Pete was a nice guy but essentially in over his head.  And, in many ways, Season 1 taught viewers an important lesson: when it comes to the film industry, nice guys get screwed.

However, as chaotic as season 1 may have been, it was nothing compared to what happened in 2003 when season 2 aired!  Whenever anyone wants to make the argument that Ben and Matt purposefully pick directors who are totally wrong for whatever film is being made, they usually point to season 2.  Season 2 featured the directing team of Kyle Rankin and Efram Potelle directing The Battle of Shaker Heights.  The Battle of Shaker Heights was supposed to be a quirky coming-of-age dramedy and a character study, so, of course, Ben and Matt selected two directors who were apparently incapable of human emotion.  And the end result was pure chaos!

Now, I will say a few things in Kyle and Efram’s defense.  When you watch season 2, the overriding theme is that these two directors totally ruined a great script.  Just in case we missed that, the show even featured screenwriter Erica Beeney complaining that these two directors were totally ruining her great script.  Well, sorry — the script for Battle of Shaker Heights was never that good to begin with.  (“It’s about this kid — Kelly — who is really pissed off,” Erica would tell us at the beginning of every episode, as if she was the first person to ever write about a kid who was really pissed off.)  I doubt anyone could have made a good movie out of that script.  Picking two directors who were so totally wrong for the material only served to compound the inherent suckiness of the material.

Season 2 has got a true train wreck appeal to it.  It’s one of those things that you watch with horrified fascination.  (Incidentally, Shia LaBeouf is heavily featured in season 2 and I have to say that he fits right in.)

The third season of Project Greenlight aired in 2005.  It was broadcast on Bravo and it’s unique in that it actually featured a good director (John Gulager) making a reasonably successful film (Feast).  As such, it doesn’t quite work as a guilty pleasure because, from the minute Gulager starts directing, you don’t feel any guilt about watching him.  Instead, the most interesting part of the third season comes early on when a bitchy casting director continually tries (and succeeds) at sabotaging Gulager’s attempts to get a cast with whom he feels comfortable.

(Season 3 has never been released on DVD but, the last time I checked, it was available on YouTube.)

After that third season, Project Greenlight went away for a while but now, 10 years later, it’s back!  It has returned to HBO and, after three episodes, it’s starting to look like this season may be the guiltiest and most pleasurable of all!  Ben and Matt were producing a comedy called Not Another Pretty Woman this time around.  (Pete Jones even returned to write the script.)  Not Another Pretty Woman has been described as being a broad comedy.  So, of course, they selected Jason Mann, an extremely intense elitist film snob.  One of the first things that Jason Mann did was try to fire Pete Jones and replace him with the screenwriter of that well-known comedy, Boys Don’t Cry.  When that didn’t work, Mann abandoned Not Another Pretty Woman and instead requested to make a film called The Leisure Class instead.  And, amazingly enough, he got HBO Films to agree, which means that either nobody had any faith in Pete Jones or everyone has total faith in Jason Mann!

Will that faith be rewarded or will The Leisure Class be another Battle of Shaker Heights?  Will Jason Mann be another John Gulager or will he fade into the same obscurity in which Efram Potelle and Kyle Rankin currently reside?

As of right now, I don’t know.

But I can’t wait to find out!