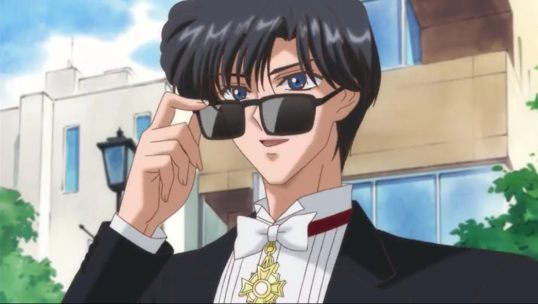 This is still event television for everyone, right? Right. I didn’t even need you to answer that, actually. Well, I myself had a slight delay in getting around to Sailor Moon Crystal this week, for which I know there can be no forgiveness. All I can do is move forward, head held high, knowing that my work as the curator of this anime is important to the total of the human race’s accomplishments. That this art cannot, in fact, be discussed enough.

As we left things off last week, Tuxedo Mask had fled into the shadows with Sailor Moon, presumably to take her someplace safe to convalesce after the confrontation with the fearsome Queen Beryl. And as it happens, we now have direct continuity… because here our hero is, waking up at Mamoru’s pad. You all know Mamoru, right guys? The guy who is totally not completely obviously Tuxedo Mask, who Usagi keeps bumping into? He dresses kind of flashily, wears sunglasses a lot… you know the type.

So right away Usagi notices the whole Tuxedo Mask costume lying around and comes to the appropriate conclusion. Glad that’s out of the way by Act 7 this time around. I don’t know how long the truth takes to sink in in the original show… but it was a while.

So it turns out that Mamoru has very few memories. Some brief snippets of childhood. That’s about it. Apparently he’s got boku bucks though, which is always handy. He’s searching for the Legendary Silver Crystal because it’s the only clue about his missing memories. From a recurring dream he’s been having about a certain princess. Unfortunately it seems our heroes aren’t quite ready to put any of this all together yet. I’m sure they’ll get there. Usagi leaves, but not before she and Mamoru have another semi-creepy moment. Since it’s their love story, ultimately, I’m going to have to stop giggling at them all the time… but I’m just not there yet. Forgive me, readers, forgive me…

Next we get a couple cuts so swift, I could swear we were watching Agents of S.H.I.E.L.D. In her secret headquarters, Luna is talking to a mysterious figure who is totally not Sailor Venus, but totally is. They’re out of time! There’s no time left! The enemy is coming!

Meanwhile, in the Dark Kingdom, that enemy is doing things. Incredibly important things. In fact, let’s take a full line break to reflect upon a name that is now being mentioned for the first time:

Fans of the original anime may or may not even be familiar with this character, as she did not exist in the English dub, instead replaced by some nebulous energy that Beryl would occasionally consult with, to unclear purpose. Here, things are laid out fairly explicitly. Back in the day, Queen Beryl discovered the Dark Kingdom near the North Pole of Earth. There, she awakened the slumbering Queen Metalia, which led to the downfall of the Moon Kingdom. In the end, Metalia was defeated and sealed by the Sailor Guardians, but now she – the nebulous ‘Great Ruler’ that our Kings (Kings!) are always on about – is back for revenge. With the Legendary Silver Crystal, Metalia will consume Earth, destroy everything, and kill everyone.

Queen Beryl is more of your world rulership kind of gal. She’d actually prefer less annihilation, more domination. Zoisite still seems to be recovering from the beating Sailors Mars, Mercury, and Jupiter dropped on him, but there’s a Silver Crystal to be found, damnit. So get moving.

Word on the street about Sailor Moon is spreading. It doesn’t seem entirely… or at all… benign.

But at school, unaware of all this apparently, Makoto, Ami, and Usagi are having lunch, and Ami has been researching Sailor V. Who is probably totally not Sailor Venus. I mean, she has the Moon Kingdom’s crescent boldly emblazoned on her forehead, which seems like a weird tattoo to get out of coincidence, but otherwise… and then in by far the creepiest thing to happen yet, Umino emerges from the shrubbery, enhanced by all kinds of hilarious anime tactics, you know, to really drive the creepiness home. This guy is a winner. Even Usagi thinks he’s creepy, and she likes everyone! Also his new suspicious plan is to “catch” Sailor Moon. HMMMMMMMMM! That does not seem ominous at all! After the break, even Naru-chan is hunting for Sailor Moon. Everyone is. Everyone. It’s like a creepy Japanese horror movie, only you know, it’s a cartoon for young adults.

Zoisite has turned the entire city into Sailor Moon hunting zombies. I have to be honest, this is a good deal more impressive than anything I ever saw him do in the original anime. The Sailor Guardians transform and roll out to protect Sailor Moon from the harm apparently wished on her by the entire populace, but with little hope of success… but Sailor Moon’s powerful new healing spell also breaks the mind control without trouble! …Oh, and probably draws Zoisite. This time, our friend (King!) from the Dark Kingdom is ready even for the combined attack of the Sailor Guardians, with a sphere of black kick-ass-ness. Fortunately, Tuxedo Mask is there to intervene, not with fancy magicks, but with a devastating right hook! He gets exactly one of those off before Zoisite decides his evil power can probably protect him from amateur boxers too. There’s some mushy stuff… Tuxedo Mask’s true wish… etc. … But what it boils down to is HOLY SHIT THERE’S SAILOR VENUS. I mean. It could be Sailor Venus. Who knows, really? There’s no confirmation. Who knows!?

I learned a lot more about the Sonique Cleansing Brush during this episode than I did about Sailor Venus. I’m willing to admit for now that that’s nobody’s fault, though. Actually, Hulu’s commercials have been somewhat tolerable this week. I’m impressed. Thank god that esurance commercial is out of the rotation. I’m seriously not sure I could have made it through this episode if I had to endure the esurance commercial.

Act 8 is titled Minako – Sailor V! So I think we have some hint of what to expect there… but the preview also hints at the arrival of Kunzite as enemy commander, and possibly some real exploration of the whole past lives and ‘Moon Kingdom’ stuff. We pretty much all know what to expect here, but it’ll be fun anyway. I personally can’t wait! Seriously, though, what happened to Jadeite… and Nephrite? Just hanging around base? Wouldn’t it make sense to pool strength? Ehhh. Best not to ask questions to which I will regret learning the answers. Perhaps they’ll turn up, with a part yet to play, ere the end.