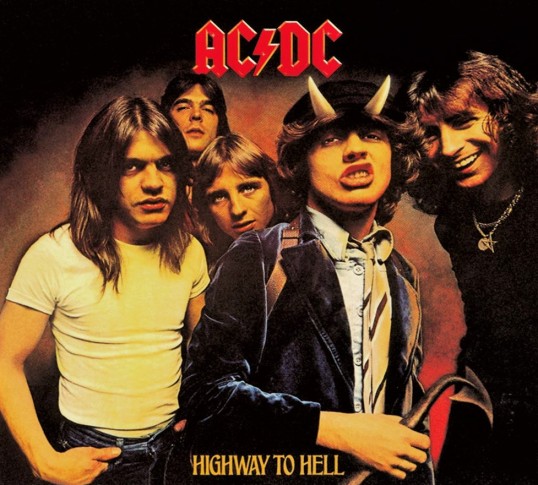 We’ve finally reached the finish line. It’s now Halloween. Enjoy the sun while it out and about because when it goes down and the sky darken and turns to black, the ghouls and monsters come out to play.

Those inclined towards enjoying the darker aspects of life will dance and play throughout the night as they continue their way down the highway to hell.

Living easy, livin’ free
Season ticket, on a one – way ride
Asking nothing, leave me be
Taking everything in my stride
Don’t need reason, don’t need rhyme
Ain’t nothing I would rather do
Going down, party time
My friends are gonna be there too

No stop signs, speedin’ limit
Nobody’s gonna slow me down
Like a wheel, gonna spin it
Nobody’s gonna mess me ’round
Hey Satan! Paid my dues
Playin’ in a rockin’ band
Hey Mama! Look at me
I’m on my way to the promise land

And I’m goin down..all the way!
I’m on the highway to hell..

Last year, I did a mini-series of “Song of the Day” that featured some of my favorite rock and metal guitar solos. This time around I plan to showcase some of my favorite guitar riffs from the world of rock and metal. I’ll be limiting my choice on the metal side to the basic metal. I’m not as well-versed on the more unique and esoteric offshoots of metal. For that one must go to our resident metal intellectual necromoonyeti.

To start things off is a classic hard rock tune the began the post-Bon Scott Era (the band’s previous frontman who had tragically passed away before recording this follow-up album). The band would tap ex-Geordie frontman Brian Johnson to front the band. The rest as they say is rock history.

The Back In Black album would become one of the biggest-selling rock albums in history and it’s title track would become just one of many platinum-certified hits from that album. The song would become not just one of rock’s greatest songs, but become a pop icon as films, tv shows and event sporting events would use it’s iconic opening riff and follow-up melody to celebrate one’s rebellious nature.

Back in black
I hit the sack
It’s been too long I’m glad to be back
Yes, I’m let loose
From the noose
That’s kept me hanging around
I’ve been looking at the sky
and it’s gettin’ me high
Forget the hearse ’cause I never die
I got nine lives
Cats eyes
Cruisin’ every woman, never wonderin’ why

Back in the back
Of a Cadillac
Number one with a bullet, I’m a power pack
Yes, I’m in a bang
With a gang
They’ve got to catch me if they want me to hang
Cause I’m back on the track
And I’m beatin’ the flack
Nobody’s gonna get me on another rap
So look at me now
I’m just makin’ my play
Don’t try to push your luck, just get out of my way

So, here’s the thing…the Eddie Awards are a pretty big deal.  The Eddies are given out by ACE, the American Cinema Editors and they are meant to honor the best edited films of the year.  The ACEs are also considered to be a pretty good precursor of what will be nominated for (obviously) Best Editing and Best Picture.

And here’s the thing — it’s rare that a film wins Best Picture without receiving, at the very least, a nomination for Best Editing.  Birdman managed to do it (and it’s odd that Birdman was snubbed for Best Editing since the editing was probably the only thing that kept Birdman from just being a pretentious mess).  However, Birdman was the exception to the rule.

What’s interesting is that Spotlight — which has dominated the critics awards — was snubbed by the Eddies.  What does this mean?  It might not mean anything.  Or it could mean that Spotlight is more popular with the critics than with the industry people who will actually be voting for the Oscars.

(The same thing happened with The Social Network a few years ago.)

What was nominated?  Check them out below and notice that Sicario — a darkhorse that I would love to see nominated — got the nomination that a lot of people were expecting to go to Spotlight.

As a film reviewer, I usually try to introduce my readers to good films that they might otherwise miss.  However, sometimes, you see a film that’s so bad, bland, and/or boring that you simply have to speak up to prevent anyone else from wasting their time watching it.  And sometimes, you come across a film so bad that, even 3 years after it was first released, you still need to raise the alarm because this film represents everything that has recently cheapened horror as a genre.

The Devil Inside is one such film.

The Devil Inside is yet another horror film that’s disguised as a “found footage” documentary.  A camera crew follows Isabella Rossi (Fernanda Andrade) as she wanders around Rome and investigates the rite of exorcism.  It seems that Isabella’s mom, Maria, committed a triple homicide 20 years previously and Isabella thinks that Maria’s possessed by a demon.  Isabella recruits two priests to perform an exorcism on her mother and — well, the rest of the movie is pretty much a remake of every other horror film that’s been released over the past 20 years.  The only surprise comes at the end of the film when a title card appears, inviting the viewers to visit a web site about the Rossi murders so that they can learn more about the “ongoing investigation.”  If there was ever a point, during the film, when you actually believed that the story being told was true, that might be an effective ending.  However, since the whole films feels false, that title card just feels insulting.

The Devil Inside was one of the first movies to be released in 2012 and, 3 years later, it remains one of the worst ever made. The performances aren’t particularly memorable, the scares are nearly non-existent, and there’s not a thing to be seen in this film that one can’t see in a better horror film.  Whereas films like The Last Exorcism, Apollo 18, and the third Paranormal Activity film actually managed to find a new wrinkles to the whole “found footage” genre, The Devil Inside seems to be content to be mediocre, boring, and, worst of all, boring.  Perhaps that’s why when I think about The Devil Inside, my immediate response is, “No more!”

No more horror films disguised as documentaries.  No more artfully awkward scenes where characters say things like, “Is the camera on?” and “Are you getting this?”  Listen, aspiring horror filmmakers — the gimmick no longer works!  We know that you didn’t just happen to find this footage sitting in some warehouse somewhere.  Don’t end your film by telling us that we should visit some equally fake web site so that we can see more “proof” that what we’ve just seen is real.  Just stop it.  It was a good gimmick while it lasted but it’s no longer effective.  It’s time to discover some new tricks with which to fool your audience.

In short, it’s time for horror filmmakers to stop expecting us to be content with stuff like The Devil Inside. 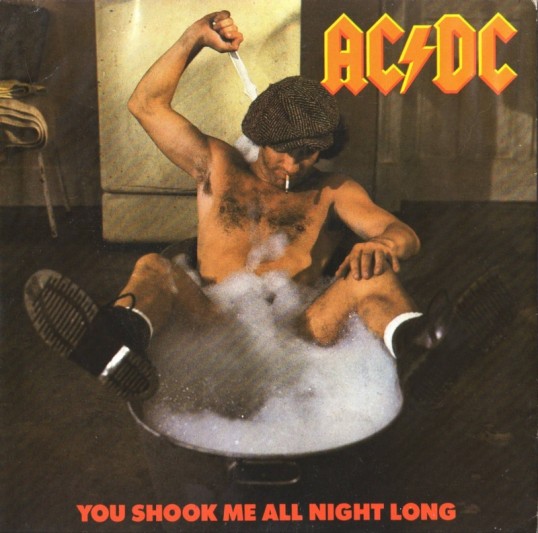 You shook me all night long! Yes, on the KTSL charts at No. 15 is just one of the greatest rock songs ever. Hyperbole and all that, but this song is just awesome times awesome equals awesome.

AC/DC’s “You Shook Me All Night Long” first appeared in their mega-blockbuster album in 1980, Back In Black. It wasn’t until 1986 when it was re-released as part of their Who Made Who album. It was during it’s re-release that I first heard and first saw the new video that accompanied the song. I think every teenage boy ended up glued to their TV’s whenever this video came on. They probably ended up taping the video for further repeat viewing.

As is their style, the song was just full of double entendres and the video itself just played up on the song’s lyrics. This video and song was just hard rock at it’s most 1980’s excess and debauchery and it was great.


Another entry to continue marking down to the day of Iron Man 2‘s US release.

Our latest song of the day has been used quite often during the trailers and tv spots for the film. I am talking about AC/DC’s “Thunderstruck” off of their 1990 album, The Razors Edge. The song starts off with one of the best opening guitar riffs with lead guitarist Angus Young machine gun picking every note of that riff before the rest of the band moves in and Brian Johnson chanting “Thunder! Thunder!” .

I can honestly believe that this song was inspired by the band seeing a Combined Arms Live Fire EXercise in Ft. Hood. The song definitely has a bombastic tone to it with just enough of the military shock and awe. It’s no wonder this song is one of the most used by YouTube uploaders as the background music to military live-fire footage both in and out of battle.

So, it is only appropriate that Marvel Studios has chosen it to be one of the songs to accompany the trailers and tv spots for Iron Man 2.

I was caught
In the middle of a railroad track (Thunder)

Went down the highway
Broke the limit, we hit the town
Went through to Texas, yeah Texas
And we had some fun
We met some girls
Some dancers who gave a good time
Broke all the rules, played all the fools
Yeah, yeah, they, they, they blew our minds

Now we’re shaking at the knees
Could I come again please?