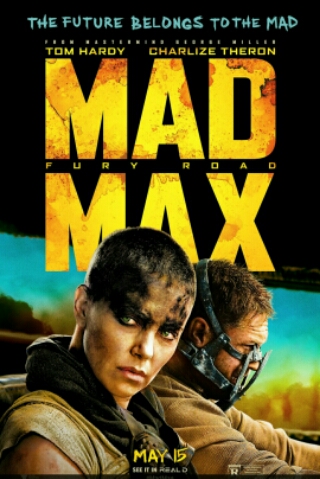 When Mad Max: Fury Road was first announced, I was skeptical. We saw what happened when a director returns to a franchise they excelled at. Neither Ridley Scott’s Prometheus nor Lucas’ work on the Star Wars prequels were as amazing as the originals. Fury Road may be the exception to that rule, at least when compared to The Road Warrior and Mad Max: Beyond Thunderdome. The visuals are bright and colorful, with chase sequences that left me smiling through it all. The 3D adds a nice touch, particularly in the chases (without giving too much away), the movie feels as if it was built for a 3D showing. I’m not sure how it comes across in a regular format.

Without looking at those films, Fury Road hits the ground running (almost literally) and continues to do so for most of the film. While the title of the film belongs to Tom Hardy’s character, Max takes something of a back seat to Charlize Theron’s Furiosa, who is the true heroine here. Max is the character that introduces the audience to the Wasteland, a world left barren after war and where Gas, Water & Blood are the richest commodities around. While I liked Hardy in this, I had the feeling that they could have put anyone in the role of Max and it wouldn’t have made much of a difference.
Furiosa is the one that carries the bulk of the story.

Fury Road’s plot is simple & thin, but given that it all takes place in a Wasteland made mostly of desert, it worked out okay for me. I wasnt expecting a whole lot on the story front, but was happily surprised with it. Imperator Furiosa is sent out with a crew for a Gas run, but decides to follow her own agenda, putting into motion the pursuit from the Immortan Joe (Hugh Keays-Byrne) and one of gis up and comimg lackeys, Nux (Nicholas Hoult).

From a pacing standpoint, Fury Road shifts it’s gears often while managing to still keep the engine purring. Some of the chases are chaotic, with cars flipping through the air and wanton destruction all over the place. You even have cycles riding over dunes and speeding through salt flats. However, it never reaches a point where you can’t see what’s occurring. The film has just one moment that I thought was slower than it should be halfway in, but it also serves to set up the 2nd act. The movie is mostly one big truck chase, but it’s done incredibly well. If you’re looking for something incredibly deep, this might not be the film you’re looking for, though the movie does try it’s best to accommodate with the script.

Another standout is the music. I’m used to hearing Tom Holkenborg (a.k.a. Junkie XL) as the remix track maker for most of Hans Zimmer’s scores. With Fury Road, Holkenborg has a number of pulsing drum rhythms and guitar pieces that fuel the chases. While it may sound a little like his work on 300:Rise of an Empire, the music fits. Note that I if you’re looking to buy the score, there’s a deluxe version with extended tracks, perfect background music for motorcycle rides on your favorite highway.

Fury Road is rated R, though I’ll admit that it wasn’t as violent as I expected it to be. It can get bloody at times, but the film never becomes a gore fest or anything along those lines. As far as nudity is concerned, there are only two instances of this and both are related to the story. In my showing, we had full families, but there didn’t seem to be any kind of reaction (as far as I can tell).

So far, we’re on track for an interesting summer.