Instead, we got stuff like the Super Bowl Babies.  And I know that a lot of people loved the Super Bowl Babies but … bleh.  Seriously, it was a really creepy and kind of annoying commercial and I refuse to believe that anyone actually enjoyed it.  I think people saw the babies and thought, “Oh, I have to enjoy this or else it means I don’t love babies.”  The babies were cute but the commercial was super creepy.

And then there was this stupid Puppy Monkey Baby thing.  What the Hell was that supposed to be!?

I have to say — if I was going to have a pet that was half baby, that’s not the half that I would want.

Anyway, I did finally manage to come up with 6 that I did like.  And here they are!  Please understand that being include on this list does not mean that this site or any author of this site is saying that you should use any of the services or products being advertised.  In fact, seeing as how we’re not getting any money for highlighting this excellent commercials, I would suggest that you not use anything featured in these commercials.

Here are the commercials:

Those little minicans drive me crazy and I refuse to allow them in either the house or here at the TSL offices.  Just a few days ago, Leonard try to stock some in the break room fridge and I spent the next few hours pouring them all out on the floor just to make a point!  But, taking all that into consideration, I still like this ad because … well, Ant-Man’s cute.

I liked this one because it featured Christopher Walken and … well, that’s pretty much the only reason.  But it’s a good reason!  If nothing else, it kept me from thinking about how much I hate car commercials.  I hope Walken does a truck commercial next because I want him to explain what torque means.

I liked this one because 1) Steve Harvey has a good sense of humor about traumatizing Miss Colombia and 2) it makes fun of Verizon.  Seriously, Verizon commercials are so smug!  Anyway, you tell them, Steve and keep praying for all us heathens.

3) Avocados From Mexico: Avos In Space

I really enjoyed this ad.  I’ll probably hate it after I see it another 100 times but for now, good job!

I’m still trying to get the Dazzling Erin to buy a Prius so I can make fun of her for getting one.  But, after seeing this commercial, I now understand that a Prius is also a great car to own if you’re planning on fleeing from the police.  Seeing as how I always root for the guy being chased whenever there’s a high-speed police chase, I appreciated this feature of the car.  Add to that, I love the way that the Prius 4 become celebrities because that’s exactly what would happen in real life.

It’s Jimmy!  And he can walk again!

And that’s it for this year!  Next year, advertisers, let’s bring back the sexy and the pretentious, okay?  It’ll make it a lot easier to make out a list.

Here’s the Super Bowl TV spot for 10 Cloverfield Lane!  I have to admit that, after some initial skepticism, I am really looking forward to this film.  It’s got a great cast and it looks intense!

Hi!  Captain American, Jason Bourne, and the X-Men weren’t the only ones to be featured in Super Bowl advertisements tonight!  The Teenage Mutant Ninja Turtles showed up as well.  And while I have less than zero desire to see this film, I know that there are plenty of people out there who disagree with me.  So, with those people in mind, here’s the ad for Teenage Mutant Ninja Turtles: Out Of The Shadows!

The X-Men film franchise helped usher in the this golden age of comic book films. Looking back at those early films makes for a love them or hate them reaction. The first two helped establish the beloved characters onto the bigscreen while successive sequels and spinoffs did much to try and tear down the goodwill created by the former.

Matthew Vaughn helped in the franchise course correction with the surprisingly good X-Men: First Class. Bryan Singer’s return with that film’s follow-up with X-Men: Days of Future Past was another step in the right direction. It even marked the beginning of Fox’s attempt to replicate Marvel Studios’ cinematic universe building.

X-Men: Apocalypse is suppose to help build on the foundation laid down by the last film. It also looks to be a sort of reboot of the core characters to their much younger versions. The doomsday vibe of the film really comes off well in the trailer and it shows enough action to excite fans.

Then they show a great looking Psylocke using her psy-blade in a way it was never meant to be as. Just embrace books Fox. Just embrace it instead of mucking it up.


Jason Bourne is back and uses the biggest sporting event to showcase in an action-packed tv spot why people should care that he’s back.

Yes, we know who he is. He definitely knows who he is, but this time around it looks like he remembers everything. If that’s the case then the CIA may be in for another beating Paul Greengrass-style with all the shaky-cam we can shake a stick at.

Looks like, if this tv spot is any indication, that Jason Bourne wasn’t taking it easy physically while he was gone. He definitely didn’t skimp on the lifting.

A month before we marvel at Captain America: Civil War we shall be treated to the latest film adaptation of Disney’s animated film The Jungle Book which itself is an adaptation of the Rudyard Kipling of the same name.

This film has such an impressive pedigree. In the director’s chair is Jon Favreau who is the man who help begin the massive Marvel Cinematic Universe with Iron Man. The cast is a who’s who of some of the most recognizable actors working today: Idris Elba, Ben Kingsley, Scarlett Johansson, Lupito Nyong’o, Christopher Walken, Giancarlo Esposito and Bill Murray.

The Jungle Book is being touted as the next step in visual effects in filmmaking with everything except the young Mowgli being computer-generated. The film’s sizzle reel trailer wowed everyone at this past summer San Diego Comic-Con and this Super Bowl trailer does everything to help make that sizzle turn into a full-blown firestorm of hype.

It’s that time of the year when the country (to some extent the world) witness a sporting event that’s become almost ritualistic in how it gathers it’s audience. I’m talking about the yearly Super Bowl pitting the NFC champions against the AFC champs. Even if one wasn’t a huge fan of football, the Super Bowl has become such an event day not just for the game, but the half-time show. Then there are the commercials which has become just as anticipated as the game itself.

It’s this day that we get major studios plying their upcoming films for the summer blockbuster season and Disney is not a studio to let this day pass without showing something new regarding one of their biggest films this summer.

The first Captain America: Civil War trailer a couple months ago got everyone anticipating the film. Now we have the Super Bowl TV spot to fan the flame of hype for the film that dared to go up against Batman v. Superman: Dawn of Justice when they both had the same release date: May 6, 2016. The latter film blinked and opted to dominate the film landscape a couple months earlier.

This tv spot emphasizes the fractured nature of Avengers that lends to the film’s title of civil war.

So, which team are you on? Are you on Team Captain America? Or are you more the Team Iron Man?

Since we are only three hours away from the game, I better get my prediction in:

And the game-winning field goal will be kicked by Gus the mule.

Enjoy the game (if you’re watching!) 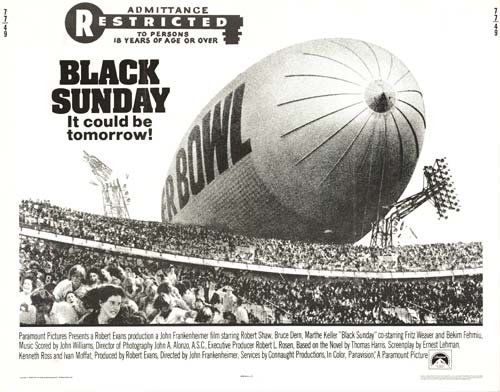 My New England Patriots aren’t in this year’s big game, and I can’t stand that big-headed Peyton Manning, so my interest in tonight’s Super Bowl is minimal. And the halftime show does nothing for me: Coldplay is probably one of my least favorite bands (Beyoncé’s OK, though). So if like me, you’re not planning on spending much time watching Roger Goodell’s season-ending spectacular (can’t stand Goodell, either) may I suggest an alternative, namely John Frankenheimer’s thriller BLACK SUNDAY.

No, it’s not the 1960 Barbara Steele/Mario Bava horror classic, this BLACK SUNDAY is a rousing political thriller about terrorist organization Black September plotting a strike against America at the biggest game of them all, the Super Bowl. Beautiful but deadly terrorist Dahlia (Marthe Keller) has recruited the bitter, unstable blimp pilot Michael Lander (Bruce Dern at his 70’s psycho best) to turn the blimp into the ultimate suicide bomb, with plastique explosives setting…