Marvel Studios is being a little bit mean this Super Bowl, offering us intriguing hints of what’s to come, as opposed to full scale trailers.  Earlier, they gave us about 19 seconds of Avengers: Endgame.  And now, here’s 30 seconds of Captain Marvel.

If you don’t have 30 seconds to spare, this teaser features Brie Larson being a badass and Samuel L. Jackson with hair and two eyes.

Spider-Man: Homecoming was the Spider-Man that fans have been waiting for. It was able to balance the character of Peter Parker and his alter-ego of Spider-Man. Where the Sam Raimi version was able to make the former stand-out at the cost of the Spider-Man alter, the Marc Webb version swapped the two dynamics. Webb’s version had a great Spider-Man but had a Peter Parker whose moral compass was a bit skewed.

Jon Watt’s Spider-Man and Peter Parker were a nice balance. It helped that the character was now free (to a degree) to play in the huge cinematic sandbox that is the Marvel Cinematic Universe.

Last we saw Spider-Man and Peter Parker, he was dusted just like half the living things in the universe following the Thanos Snap. The question that gets brought up whenever Spider-man: Far From Home, the sequel to Spider-Man: Homecoming, gets talked about is does this film take away from the emotional sucker punch that was Avengers: Infinity War and it’s upcoming sequel, Avengers: Endgame.

From this teaser trailer and it’s international version has shown, the question still remains as both teasers mention nothing about the Avengers and keeps the timeline of the film vague enough to make one wonder if this sequel happens before Avengers: Infinity War.

I guess fans will find out on July 5, 2019 when the film is released worldwide.

….and here’s the International Teaser trailer 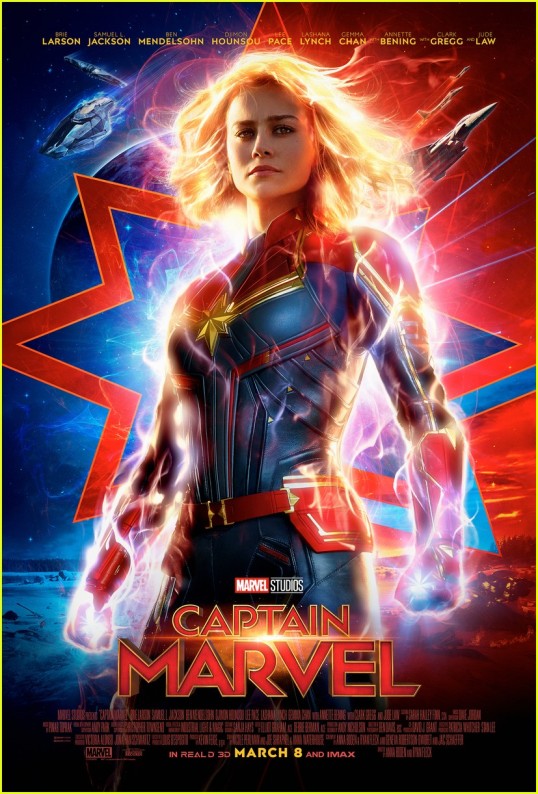 Tonight we finally get to see the official trailer for Marvel Studio’s upcoming entry to their ever expanding Marvel Cinematic Universe. Just like Marvel Universe-616 which was born at the Big Bang and continues to expand ever outward there doesn’t seem to be any sign of the MCU suddenly collapsing under the weight of fan expectations and the imagination of the writers and filmmakers who have been tapped by Kevin Feige and group to usher in the Golden Age of Comic Book films.

This past summer, fans of the MCU were treated to the spectacle (and surprisingly emotional) that was Avengers: Infinity War. Those who stayed for the final stinger at the end of the credits of that film were treated to a clue as to who may just save the MCU from Thanos’ snap.

Captain Marvel will be Marvel Studio’s first female-led entry to the series. Some have been in the camp that Marvel took too long to do such a project while a small, albeit very vocal group think Marvel have been bit by the SJW bug.

For the most part the majority of fans are just excited to see the adventures of one Carol Danvers aka Captain Marvel finally up on the big screen. We shall see this March 8 whether Captain Marvel lives up to the hype and excitement that has been building since the end of Avengers: Infinity War. 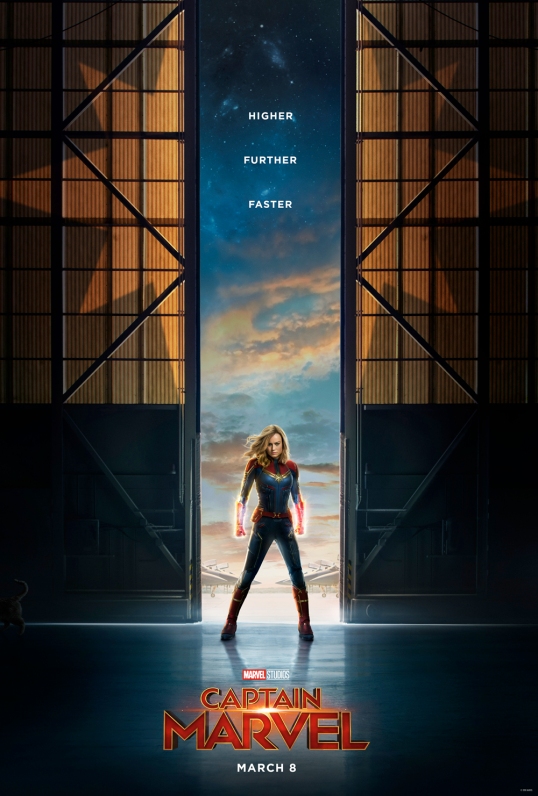 It’s still 6 months away, but with nearly everyone (puts on the hyperbole cap) in the known universe having been left in a state of disbelief with this past summer’s Avengers: Infinity War, the latest entry in the on-going Marvel Cinematic Universe just released it’s first trailer.

Captain Marvel, the MCU’s female-led entry and it’s Superman, finally gets to show some of it’s wares. Set, in the 1990’s with Blockbuster Video still king, Captain Marvel will tell the story of Air Force pilot Carol Danvers who also happens to be the hero known as Captain Marvel.

We’re not sure if the film will be an origin story or not, but from what was shown in the trailer, there’s a chance whatever original story we get it’ll be done through flashbacks. This is a Captain Marvel who is already is control of her abilities.

It’s been rumored that the Spider-Man: Homecoming trailer will appear in front of Rogue One: Star Wars Story. It’s logical considering Sony has let Spider-Man to play in the Marvel Cinematic Universe sandbox which also happens to share spot in the Walt Disney Empire with Lucasfilm. Yet, we don’t have to wait for next week’s Rogue One to see this trailer. Like all superhero blockbuster films the trailers themselves get their premiere on-line (after a live premiere on Jimmy Kimmel Live) and this is no different with the first official trailer for Spider-Man: Homecoming.

So, without further ado, here’s not one, but two trailers for Spider-Man: Homecoming.

Domestic: this one definitely focuses more on the high school aspect of Spider-Man’s life.

International: this one a bit more action-packed with a focus on Spider-Man’s heroics and more time showcasing the villains.

James Gunn finally unleashes the first full teaser trailer for his upcoming space opera superhero film out on May 2017. Guardians of the Galaxy Vol. 2 remains one of the 2017’s highly-anticipated films and looking back at how the first film there’s a great chance this band of galactic misfits’ next adventure could join the billion-dollar club. Not bad for a film that earned its popularity on the shoulders of a talking, psychotic raccoon and a talking tree (if I remember correctly, that tree made Lisa Marie cry).

This teaser trailer definitely focuses on the smallest member of the team in Baby Groot and from the reaction on the internet since the teaser trailer’s release it might have just broken the internet in some fashion. The humor from the first film looks to return as well with the cast staying the same and more in tuned with one another.

As all teaser trailer should do, this one doesn’t reveal much of the film’s plot. Just enough action and great visuals to whet the appetites of those already eagerly awaiting the film to arrive.

Consider appetites to be whetted.

Guardians of the Galaxy Vol. 2 is set for release on May 5, 2017 in 3D and IMAX everywhere in the galaxy.

“There are two types of beings in the universe. Those who dance and those who do not.”

Another brief break from our regularly scheduled horror programming courtesy of Marvel Studios and James Gunn (and the rockin’ sweet poster of the whole Guardians looking like they’re about to drop the hottest 80’s rock album in history).

Guardians of the Galaxy was a surprise hit for Marvel Studios in 2014. It was an obscure Marvel Comics property that many thought would finally end the long streak of box-office success for Marvel Studios and it’s growing and ever-expanding Cinematic Universe. Instead, it was a huge hit with audiences and critics, alike.

This was the film that finally cemented the arrival of a juggernaut blockbuster studio. One that ended up tying Warner Bros. and DC Studios into so many knots in trying to keep up. If Marvel Studios could make a film that had a talking raccoon and tree who spoke only one phrase into a major hit then surely a film with Batman and Superman sharing the screen would be a mega-success.

Now, we have to wait until the start of the 2017 Summer film season to see what new cosmic adventures and hi-jinks Star-Lord and his Guardians of the Galaxy have been getting into.

Until then James Gunn has released this sneak peek (pretty much a teaser trailer) into Guardians of the Galaxy Vol. 2 (he did promise there will be an official trailer coming soon).

For the past decade or so, Marvel Studios has had a major presence in Hall H of San Diego Comic-Con. They’ve made it a point to hype up their upcoming films. From their very first one with Iron Man all the way back in 2007 to this year’s upcoming Doctor Strange and next year’s Spider-Man: Homecoming and Guardians of the Galaxy Vol. 2. One film coming out next year that only got a sizzle reel of concept art was Thor: Ragnarok. By the time of San Diego Comic-Con the film had only been filming for a couple weeks so any usable footage wasn’t ready to be shown.

Taika Waititi, the film’s director, decided that a sizzle reel of concept art for the film wouldn’t do and ended up filming a short 3-minute mockumentary detailing the whereabouts of one Thor Odinson during this past summer’s Civil War event. People who attended the Hall H presentation were raving about this short film and now the rest of the world gets a chance to see it as Marvel Studios have released the footage for all to experience. 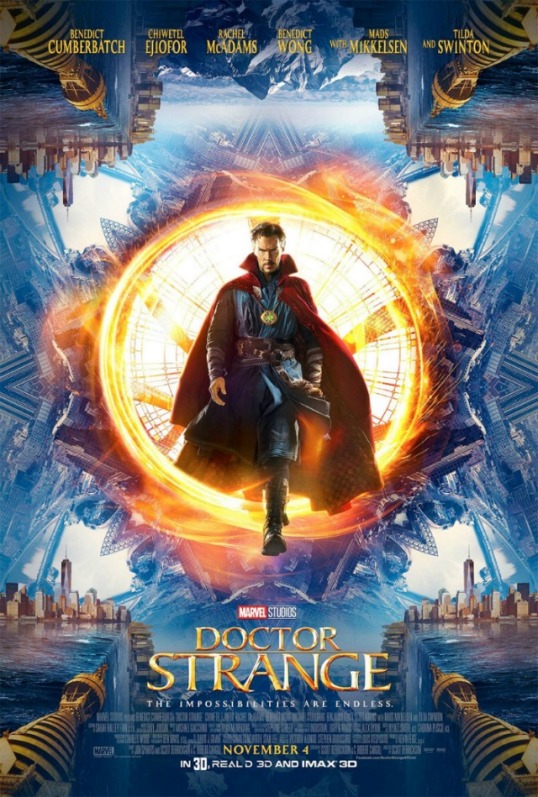 San Diego Comic-Con for the past decade has always been a major mainstay for Marvel Studios when it comes to releasing their latest news and trailer for their upcoming films. There has been rumors the last couple years that Marvel Studios may skip Comic-Con and it’s venerable Hall H altogether in the near-future. Marvel Studios being owned by Disney means they have access to their parent company’s own D23 event. There’s even talk of just having a yearly Marvel Con to showcase everything Marvel.

Until that occurs many who attend San Diego Comic-Con will stand hours (some even days) to be able to get into Hall H and be the first to see what Marvel Studios has up it’s sleeves. This year we get the latest trailer on their biggest gamble to date: Doctor Strange.

A gamble in that it will delve deeply into the one aspect of the Marvel Universe it has so far avoided: magic.

One cannot make a film about Doctor Strange and not portray the magic and sorcery, the otherworldly dimensions and demons, spells and illusions. This is the bread and butter of the Sorcerer Supreme and if this latest trailer is any indication then filmmaker Scott Derrickson may have just broken the code in how to integrate this aspect of the Marvel Universe into the grounded, albeit hyper-reality, of the Marvel Cinematic Universe.

Marvel is already making big waves on the first day of the San Diego Comic Con. Building on the successes of Daredevil and Jessica Jones, the company revealed some new series in their current deal with Netflix.

New York has yet another hero as Luke Cage gets a show of his own. Introduced into the Marvel Cinematic Universe by way of Jessica Jones, Cage (Mike Coulter) appears to be up against quite a bit, though from the trailer, it’s nothing a car door can’t handle. It also looks like Mahershala Ali (House of Cards) is on board, possibly as a villain.

Though I only know of him through the Ultimate Spider-Man animated series, long time Marvel fans will be pleased to see Iron Fist in the line up. Having finished his run in Game of Thrones, actor Finn Jones has moved on to play Danny Rand, a man who discovers the power of Kung Fu and awesome Chi control. Marvel historians will also note that Iron Fist and Luke Cage have often worked together, which brings us to the biggest news of the day.

Marvel’s The Defenders brings together Iron Fist, Luke Cage, Jessica Jones and Daredevil (who will undoubtedly have Season 3 on the way) in their own team up. I’m curious to see how this turns out, and how much of their combined tale filters into their individual stories (or vice versa). It feels similar to the Avengers, though on a smaller scale.

Day 2 of the San Diego Comic Con continues today. As new information pours in, we’ll be sure to share. Enjoy.