One year after throwing his tin star to the ground and riding out of town in disgust at the cowardice of the citizens who he once served, former Marshal Will Kane (Lee Majors, stepping into the role that won Gary Cooper an Oscar) returns to Hadleyville with his bride, Amy (Katherine Cannon).

Hadleyville has a new sheriff.  When Kane angrily left, he was replaced by J.D. Ward (Pernell Roberts), a corrupt tyrant who runs the town with an iron fist and who is more interested in making money than upholding the law.  Ward is determined to collect the bounty on Ben Irons (David Carradine), a reformed outlaw who swears that he’s innocent.  Kane decides to try to help Ben escape from Ward and his posse, which leads to potentially disastrous consequences for him.  Will the town finally show the courage necessary to stand behind Kane or will he once again be forced to go it alone?

High Noon, Part II is a made-for-TV movie.  It was obviously designed to be a pilot for a potential television series, one that would have featured the weekly adventures of Will Kane in Hadleyville.  As far as made-for-TV westerns are concerned, it’s about average, neither particularly good nor bad.  Lee Majors may not have been a great actor but he was believable in western roles and both Pernell Roberts and David Carradine give good performances as well.  Jerry Jameson directs in a workmanlike manner.  The story’s predictable but it’s a western so what do you expect?

The main problem with the film is that it’s set up to be a sequel to a film that never needed one.  When Gary Cooper threw that star in the dust and climbed up on that wagon with Grace Kelly in High Noon, the whole point of the story was that Will Kane was never going to return to Hadleyville because the citizens of Hadleyville deserted him when he most needed them.  Hadleyville didn’t deserve Will Kane.  That’s what set High Noon apart from other westerns.  Having Kane return to Hadleyville and once again pick up the tin star negates everything that made High Noon so effective.  The whole point of the ending was that Will Kane was never going to return but, according to this movie, he did and forgave the town for the unforgivable.  It’s impossible to watch High Noon II without thinking about how it goes against everything that the first High Noon was all about.

Oddly enough, the film’s forgettable screenplay was written by the great Elmore Leonard.  Leonard did better work before this film and he would do better work afterwards.

In this self-conciously hip western, former Lolita Sue Lyon stars as Myra Polsen.  Myra has a reputation for being the town tramp and, when her father discovers Myra in bed with wanted outlaw Frenando Nunez (Julian Mateos), it leads to her father having a violent breakdown which ends with him shooting himself and Frenando escaping into the desert.  (Before anyone comments, that’s not a misspelling.  The outlaw’s name actually is Frenando.)  World-weary U.S. Marshall Ross (Pernell Roberts) heads into the desert to try to capture Frenando.  Accompanying him are Myra (who still loves Frenando) and the mysterious Mr. Brown (Leslie Nielsen!), a detective who is obsessed with Frenando and who says that he’ll kill the outlaw as soon as he sees him.

Also accompanying them is a ghostly folksinger played by Janis Ian, of At Seventeen fame.  Ian sings songs that comment upon the story and they’re just as empty-headed and bad as you would expect them to be.  Janis Ian’s presence marks this as being one of the handful of new wave westerns that were released in the wake of Easy Rider, The Wild Bunch, and the films of Sergio Leone.  These westerns attempted to appeal to the counter-culture by sympathizing with the outlaws and featuring crooked lawmen.  The addition of Janis Ian and her songs is Four Rode Out‘s way of saying, “This may be a western but this is a western that gets it.” Instead, it just comes across as artificial and forced.  There’s a lot of room for both moral ambiguity and political subtext in the western genre, which was something that Leone and Sam Peckinpah proved.  There’s less room for a hippie folksinger, as Four Rode Out demonstrates.

Other than Janis Ian’s songs and some dialogue that tries too hard to be profound, Four Rode Out isn’t bad.  Sue Lyon really digs into the role of Myra and even Pernell Roberts gives a good performance.  Of course, if you’re watching this movie in 2020, it’s probably going to be because of Leslie Nielsen.  This movie was made before Nielsen recreated himself as a comedic actor and it’s interesting to see how the same things that made Nielsen so funny — the deadpan delivery, the overly serious facial expressions — also made him a good villain.  For modern audiences, it can be difficult to look at Leslie Nielsen without laughing.  That’s how much we associate him with comedy.  But once you accept the fact that this is Leslie Nielsen playing a bad guy, he’s very convincing in the role.

One final note of interest: Four Rode Out was based on a story idea from the actor Dick Miller.  Yes, that Dick Miller.  Unfortunately, Miller himself is not in the movie.

Randolph Scott and director Budd Boetticher  teamed again for RIDE LONESOME, their sixth of seven Westerns and fourth with writer Burt Kennedy. Scott’s a hard case bounty hunter bringing in a killer, joined in his trek by an old “acquaintance” with an agenda of his own. Everyone’s playing things close to the vest here, and the stark naked desert of Lone Pine’s Alabama Hills, with its vast emptiness, plays as big a part as the fine acting ensemble.

Ben Brigade (Scott) has captured the murderous Billy John and intends to bring him to justice in Santa Cruz. Coming to a waystation, he finds Sam Boone and his lanky young companion Whit, known outlaws who’ve heard the territorial governor is granting amnesty to whoever brings in Billy. Also at the station is Mrs. Crane, whose husband has been murdered by marauding Mescaleros. Sam’s interested in forming a partnership and taking Billy… 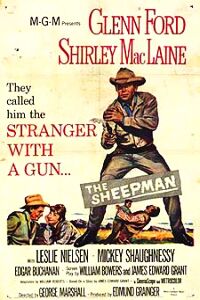 At the start of The Sheepman, reformed gambler and gunslinger Jason Sweet (Glenn Ford) shows up in the middle of cattle country. He has won a herd of sheep in a poker game and he is planning on grazing them on the nearby public land. Knowing that he will face opposition from the local cattle ranchers, Jason asks the local towns people to direct him to the town bully. After Jason beats up Jumbo (Mickey Shaughnessy), Jason is invited to meet Jumbo’s boss, Col. Stephen Bedford (Leslie Nielsen).

As soon as Jason meets Bedford, he realizes that he is not a colonel and his name is not Bedford. Instead, he is an old friend from Texas, a former gambler and outlaw named Johnny Bledsoe. Like Jason, Bledsoe has also gone straight and is now the most powerful man in town. He is also engaged to marry a local girl named Dell Payton (Shirley MacClaine), to whom Jason has taken a liking.  Bledsoe tells Jason to take his sheep somewhere else and when Jason refuses, Bledsoe threatens to have him, Dell, and his sheep killed.

Wait a minute, Leslie Nielsen is playing a bad guy?

Surely, you can’t be serious!

I am serious. And don’t call me Shirley.

Leslie Nielsen is best remembered for being the deadpan comedian who could deliver the most ridiculous of lines with a totally straight face and who helped to make Airplane one of the funniest movies ever made. But before Nielsen recreated himself as a comedic actor, he was a dependably stiff supporting player and occasional leading man who appeared in nearly 100 dramatic pictures. The Sheepman is one of his “serious” roles.

Today, it is always strange to see one of Nielsen’s dramatic performances. Johnny Bledsoe is a standard western villain and Nielsen does okay with the role but, because his serious performances shared the same style as his comedic performances, it was impossible not to think of Dr. Rumack saying, “I just want to tell you both good luck. We’re all counting on you,” even while Johnny Bledsoe was offering to pay the outlaw Chocktaw (Pernell Roberts) to track down and kill Jason and his sheep.

The Sheepman is an average western and, as always, Glenn Ford is a good hero. But ultimately, the most interesting thing about it and the main reason to see it is to witness Leslie Nielsen doing his thing before he officially became the funniest man in the world.  Leslie Nielsen was not a terrible dramatic actor but watching The Sheepman made me all the happier that he eventually got to show the world his true calling.