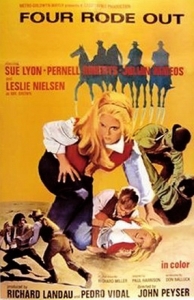 In this self-conciously hip western, former Lolita Sue Lyon stars as Myra Polsen.  Myra has a reputation for being the town tramp and, when her father discovers Myra in bed with wanted outlaw Frenando Nunez (Julian Mateos), it leads to her father having a violent breakdown which ends with him shooting himself and Frenando escaping into the desert.  (Before anyone comments, that’s not a misspelling.  The outlaw’s name actually is Frenando.)  World-weary U.S. Marshall Ross (Pernell Roberts) heads into the desert to try to capture Frenando.  Accompanying him are Myra (who still loves Frenando) and the mysterious Mr. Brown (Leslie Nielsen!), a detective who is obsessed with Frenando and who says that he’ll kill the outlaw as soon as he sees him.

Also accompanying them is a ghostly folksinger played by Janis Ian, of At Seventeen fame.  Ian sings songs that comment upon the story and they’re just as empty-headed and bad as you would expect them to be.  Janis Ian’s presence marks this as being one of the handful of new wave westerns that were released in the wake of Easy Rider, The Wild Bunch, and the films of Sergio Leone.  These westerns attempted to appeal to the counter-culture by sympathizing with the outlaws and featuring crooked lawmen.  The addition of Janis Ian and her songs is Four Rode Out‘s way of saying, “This may be a western but this is a western that gets it.” Instead, it just comes across as artificial and forced.  There’s a lot of room for both moral ambiguity and political subtext in the western genre, which was something that Leone and Sam Peckinpah proved.  There’s less room for a hippie folksinger, as Four Rode Out demonstrates.

Other than Janis Ian’s songs and some dialogue that tries too hard to be profound, Four Rode Out isn’t bad.  Sue Lyon really digs into the role of Myra and even Pernell Roberts gives a good performance.  Of course, if you’re watching this movie in 2020, it’s probably going to be because of Leslie Nielsen.  This movie was made before Nielsen recreated himself as a comedic actor and it’s interesting to see how the same things that made Nielsen so funny — the deadpan delivery, the overly serious facial expressions — also made him a good villain.  For modern audiences, it can be difficult to look at Leslie Nielsen without laughing.  That’s how much we associate him with comedy.  But once you accept the fact that this is Leslie Nielsen playing a bad guy, he’s very convincing in the role.

One final note of interest: Four Rode Out was based on a story idea from the actor Dick Miller.  Yes, that Dick Miller.  Unfortunately, Miller himself is not in the movie.