Is the Legend of Tarzan going to be any good?  Judging from the trailer … I have no idea.  I’m too busy looking at Alexander Skarsgard…

Legend of Tarzan is coming out in July of 2016 so I know where I’ll be while the rest of you are watching The BFG...

Right now, the jury’s out on whether or not Steven Spielberg’s Bridge of Spies will be an Oscar champ or an Oscar also-ran.  But, regardless of how things go with the Academy, Spielberg’s follow-up to Bridge of Spies is already scheduled for a July 1st, 2016 release!  It’s called The BFG and here’s the trailer!

Here’s the latest trailer for Jane Got A Gun, featuring Natalie Portman, Joel Edgerton, a hot air balloon, and a gun!  This movie will be released on January 29th, 2016!

Did you know that The Martian was a comedy?

Well, no, actually it’s not.  It’s a very serious film that has a few comedic moments.  Matt Damon makes a few jokes but that’s largely because he’s trying not to lose his mind and commit suicide.  However, The Martian was submitted to the Golden Globes as a comedy.  Why?  Probably because the producers realized that it would be easier for them to win if their film was the only big-budget drama nominated in the comedy category.  It’s dishonest, it’s unethical, and it totally worked.  This morning, when the Golden Globe nominations were announced, The Martian was nominated for Best Picture, Comedy or Musical.

I was not a particularly huge fan of The Martian to begin with.  The fact that it has now been nominated for Best Comedy while Inside Out was not does not help matters.

Anyway, as for the rest of the Golden Globe nominations … actually, I like a lot of them.  Mad Max: Fury Road was nominated for Best Picture, Drama and that should help it regain whatever momentum it may have lost after not being nominated by the SAG.  The Big Short was also nominated for Best Picture, Comedy so I guess I really will have to see it, despite having no desire to do so.  Trumbo was not nominated for Best Picture but it did pick up nominations for Bryan Cranston and Helen Mirren.  Spotlight was naturally nominated for best picture but received no acting nominations, which means that either all the actors are splitting the votes among themselves or maybe Spotlight, while remaining the front-runner, is not as universally loved as some are thinking.  It’s impossible for me to say because I haven’t seen Spotlight yet but I have noticed that a lot of critics seem to be more respectful than enthusiastic about it.

(At the same time, my friend, the sportswriter Jason Tarwater, was quite enthusiastic after seeing Spotlight and I usually trust his opinion on these things.)

Did you like The Passion Of The Christ (2004), but felt it needed slapstick comedy to go along with its overuse of slow motion? Well don’t worry, cause Brazilian Star Wars has got your back. Just like Turkish Star Trek is actually an entry in a different series of movies, this is one in a series of films that featured a Brazilian comedy troupe called The Tramps. They basically run around acting like silent comedians. In fact, the movie has little dialog in it. They must have thought it would be fun to stick them into Star Wars cause I guess sticking them into Planet Of The Apes went over so well in 1976.

The movie opens up exactly like Star Wars. By that, I mean a car chase. 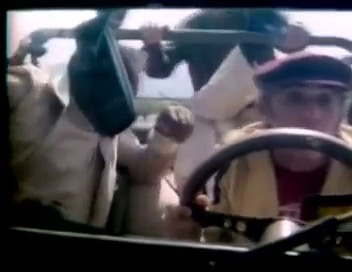 Like almost every scene in this movie, it seems to go on forever. Oh, and it starts with the slow motion right off the bat like these two shots. 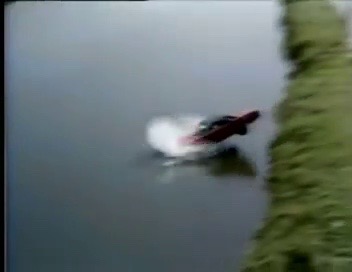 It turns out the Tramps were being chased because one of them fooled around with a girl who was already with someone. All you need to know is that this means they are stuck camping out in the middle of nowhere. But before Star Wars can enter into their lives, we need some more comedy. Enter the turtle with a candle on it’s back.

This leads to a guy being set on fire. 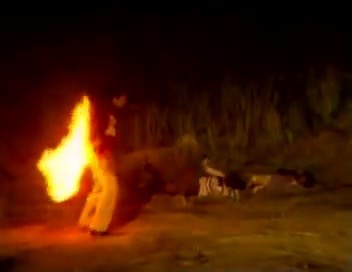 And don’t let the comedic opportunity of a fire extinguisher and a black member of the Tramps go to waste! 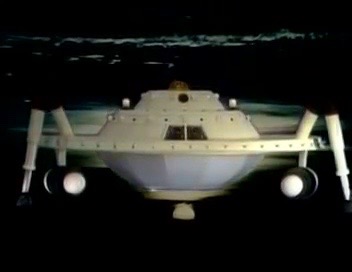 But first, let’s get a good look at each Tramp.

Or Flik. I don’t care. I’ll just call him Hunk Skywalker. He’s there to tell them he needs their help to retrieve half of the brain computer. It is being held by Zuco AKA Darth Vader. He offers to pay them their weight in gold. So of course they agree and go to board the ship. Then Chewbacca pops up in the entrance. This is when this film introduces us to another annoying thing it will do. They see Chewbacca, run away, then the footage is reversed, and they go into the ship. They will also sometimes simply repeat a shot several times for…comedy? Regardless, here’s Chewbacca.

Now we go to Hunk Skywalker’s planet and a battle ensues that goes on forever with so much slow motion. 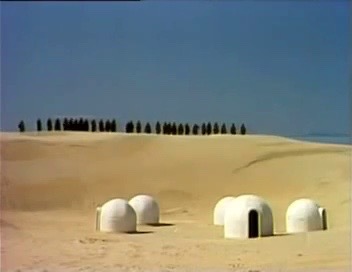 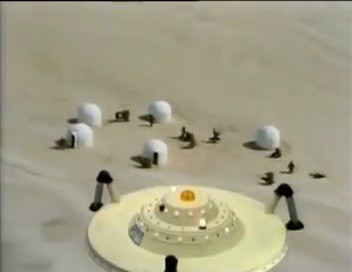 All that’s important here is that Zuco kidnaps this movie’s Princess Leia.

After one of the sand people blows up a hut, we get introduced to the multi-colored ladies.

I guess the movie thought it needed to add some women in because otherwise it was too much of a sausage fest. That, and maybe this already colorful movie needed even more color. I don’t know, they serve about as much purpose as the Tramps in this movie. After a little travel we come to Brazilian Star Wars’ version of the bar scene. It’s a disco!

Here’s another scene that goes on for EVER!!! Actually I think it comes out to about 10-14 minutes of the movie. Dancing, fighting, and Hunk Skywalker talking to a guy named Igor about where to find Zuco. Eventually this nonsense comes to an end. Then just in case we weren’t sure this was the 1970’s.

Yellow tramp gets hungry and refuses to just eat a pill. He goes off and cracks open a giant egg. 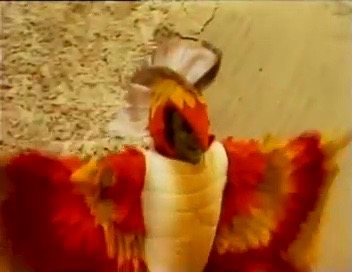 And I’m pretty sure that’s what the Phoenix would have looked like if the Tramps were in Harry Potter.

Then Yellow Tramp spots Zuco and his soldiers which means more pointless scenes. They wind up underground. 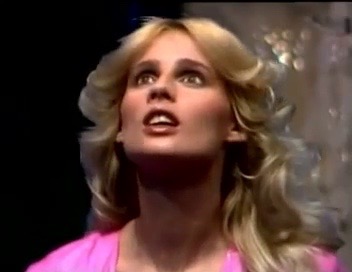 After Brazilian Farrah Fawcett looks around, they run into a giant spider. 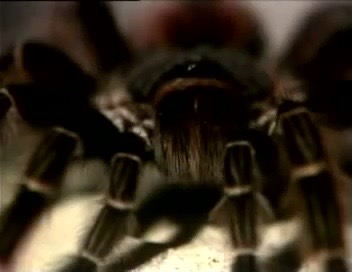 Eventually, they make their way out. Too bad the spider didn’t get them so we could be spared this Hunk Skywalker dream. 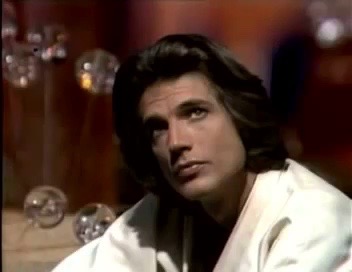 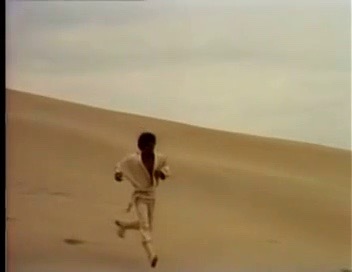 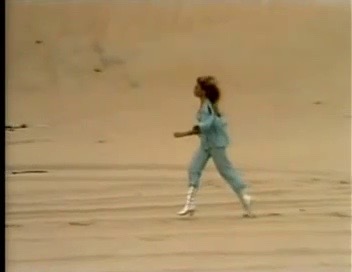 Do I even need to tell you that’s all in slow motion? Then we get a flashback to the car chase at the beginning of the film since it’s crucial we be reminded of that.

After some talking and this… 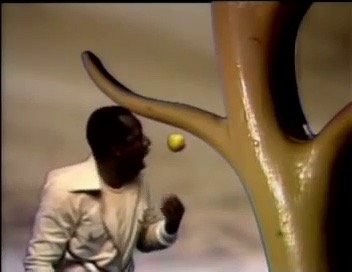 they go to make an exchange with Zuco. Their half of the brain computer for the princess. This doesn’t go well. They make the exchange but then the princess takes off a mask and it’s this.

But at least this scene gives us a line that should be immortalized right along side “Use the force”. 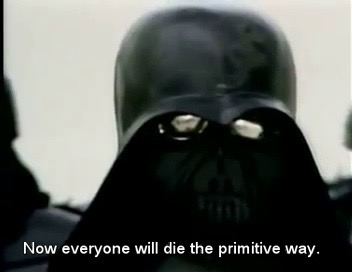 Apparently, that meant hanging them over spikes.

They didn’t count on Yellow Tramp to be in the box instead of the brain computer. This leads to another scene that goes on forever. 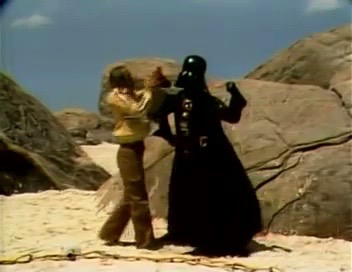 Eventually this comes to an end and they take Zuco’s men prisoner. 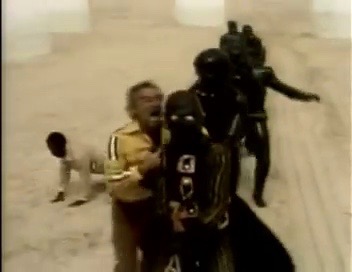 After putting the brain computer back together almost everything is fixed like this city emerging from who knows where. At least I think it’s a city. 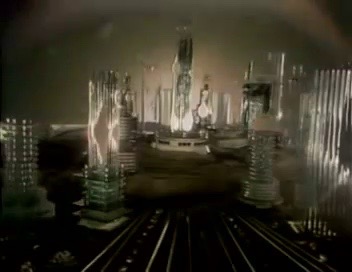 Now Hunk Skywalker finally asks Zuco where his princess is. Turns out making that fake mask for the exchange killed her in the process. Isn’t that nice. Yellow Tramp decides he is going to stay with the Yellow Lady, but there’s one problem. Turns out when the princess dies, her older sister takes over as princess.

After the movie gives us false hope…

they wake up back home. At first they think it was a dream, but there’s damage from where the spaceship landed. Then Hunk Skywalker flies by and not only is their Jeep full of gold, but the Jeep itself is gold. The End!

I actually watched this for the first time a couple of years ago and liked it. I didn’t like it this time. The scenes really do go on way too long with way too much slow motion. The comedy is unfunny to say the least. This might be fun for a little kid, but for everyone else, it just means we should all be saying “Now everyone will die the primitive way.”