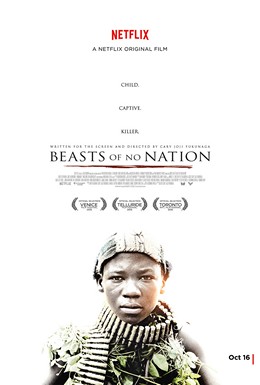 Abraham Attah plays Agu, a 12 year-old boy living in a small village in an unnamed African country.  In many ways, Agu is a normal child.  He likes to hang out with his friends.  He looks up to his older brother and his father.  He loves his mother.  He goes to school, he goes to church, and he prays regularly.  Though his village may be poor, he and his friends still find ways to keep each other entertained.

However, Agu is living his life in the middle of a war zone.  Though the details are intentionally left obscure, his country is in the middle of a civil war.  Throughout the film, we continually hear people talking about the different warring factions but we never learn the specifics of what those factions believe or why they’re all fighting each other in the first place.  And, of course, it really doesn’t matter.  The only thing that’s important is that they are fighting and Agu is about to sacrifice his childhood to their war.

When his village is attacked by government forces and his brother and father are killed in front of him, Agu runs into the jungle.  It’s there that he’s eventually captured by one of the many different rebel factions.  This faction is led by the Commandant (Idris Elba), a charismatic and messianic figure who recruits Agu to serve as one of his child soldiers.

(I’m assuming that the Commandant was, at least in part, based on Joseph Kony of Kony 2012 fame.)

At first, the Commandant presents himself as being a father figure to Agu and Agu looks up to him. The Commandant, for his part, orders Agu to kill a possibly innocent man and also keeps Agu and his other child soldiers stoned on various drugs.  Whereas he once only wanted to reach the capital city and be reunited with his mother, Agu now becomes a ruthless killer.  During the day, he fights.  And, at night, he and the other soldiers run the risk of being sexually assaulted by the Commandant.

It’s a harrowing film, one that is made all the more poignant by the fact that, even as he’s committing terrible acts, Agu still remains, in many ways, an innocent child.  It’s significant that, when the Commandant takes the soldiers to a brothel, Agu ends up sitting in a corner.  He’s too young for the brothel but, under the twisted logic of his circumstances, he’s old enough to kill and be killed.  It’s not easy to watch but it is a film that should be watched because this is what is happening in certain parts of the world right now.

Beasts of No Nation is not an easy film to watch.  It doesn’t offer any easy solutions and the film itself ends on a note of terrifying ambiguity.  But watch it you should.  It’s an important film about a real-life outrage and it not only deserves to be seen but it needs to be seen as well.

31 responses to “The Things You Find On Netflix: Beasts of No Nation (dir by Cary Fukunaga)”