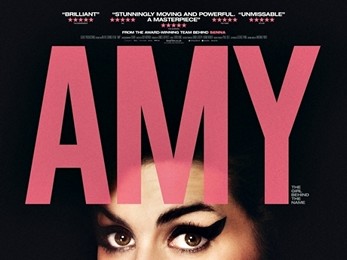 Amy opens with brilliant and, in its way, heartbreaking footage of a 14 year-old Amy Winehouse and a friend singing Happy Birthday at a party.  Even though she’s singing deliberately off-key and going over-the-top (as we all tend to do when we sing Happy Birthday), you can tell that Amy was a star from the beginning.  She’s obviously enjoying performing and being the center of attention and, try as you might, it’s impossible not to contrast the joy of her Happy Birthday with the sadness of her later life.

A star whose music touched millions (including me), Amy Winehouse was ultimately betrayed by a world that both wanted to take advantage of her talent and to revel in her subsequent notoriety.  It’s often said the Amy was self-destructive but, if anything, the world conspired to destroy her.  By focusing on footage of Amy both in public and private and eschewing the usual “talking head” format of most documentaries, Amy pays tribute to both Amy Winehouse and reminds us of what a great talent we all lost in 2011. 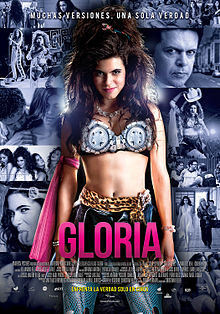 The Mexican film Gloria is a musical biopic of Gloria Trevi (played by Sofia Espinosa), a singer whose subversive songs and sexual image made her a superstar in Latin America and challenged the conventional morality of Catholic-dominated establishment.  Her manager and lover was the controversial Sergio Andrade (Marco Perez).  The movie follows Gloria from her first audition for the manipulative Sergio to her arrest (along with Sergio) on charges of corrupting minors.  It’s an interesting and still controversial story and Gloria tells it well, with Espinosa and Perez both giving excellent performances. 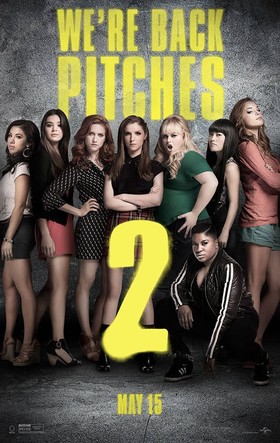 The Bellas are back!  As I think I’ve mentioned a few times on this site, I really loved the first Pitch Perfect.  In fact, I loved it so much that I was a bit concerned about the sequel.  After all, sequels are never as good as the original and I was dreading the idea of the legacy of the first film being tarnished.

But the sequel actually works pretty well.  It’s a bit more cartoonish than the first film.  After three years at reigning ICCA champions, the Bellas are expelled from competition after Fat Amy (Rebel Wilson) accidentally flashes the President.  The only way for the Bellas to get the suspension lifted is to win the World Championship of A Capella.  The plot, to be honest, really isn’t that important.  You’re watching the film for the music and the interplay of the Bellas and, on those two counts, the film totally delivers.

It should be noted that Elizabeth Banks had a great 2015.  Not only did she give a great performance in Love & Mercy but she also made a respectable feature directing debut with Pitch Perfect 2. 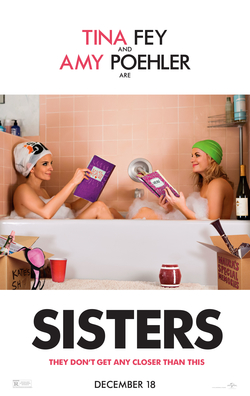 It’s interesting how opinions can change.  For the longest time, I really liked Tina Fey and I thought that Amy Poehler was kind of overrated.  But, over the past two years, I’ve changed my opinion.  Now, I like Amy Poehler and Tina Fey kind of gets on my nerves.  The best way that I can explain it is to say that Tina Fey just seems like the type who would judge me for wearing a short skirt and that would get old quickly, seeing as how I happen to like showing off my legs.

Anyway, in Sisters, Tina and Amy play sisters!  (Shocking, I know.)  Amy is the responsible one who has just gotten a divorce and who wants to make everyone’s life better.  Tina is the irresponsible one who refuses to accept that she’s no longer a teenager.  When their parents announce that they’re selling the house where they grew up, Amy and Tina decide to throw one last party.  Complications ensue.

I actually had two very different reactions to Sisters.  On the one hand, as a self-declared film critic, it was easy for me to spot the obvious flaw with Sisters.  Tina and Amy should have switched roles because Tina Fey is simply not believable as someone who lives to have fun.  Sometimes, it’s smart to cast against type but it really doesn’t work here.

However, as the youngest of four sisters, there was a lot of Sisters that I related to.  I saw Sisters with my sister, the Dazzling Erin, and even if the film did not work overall, there were still a lot of little scenes that made us smile and go, “That’s just like us.”  In fact, I think they should remake Sisters and they should let me and Erin star in it. 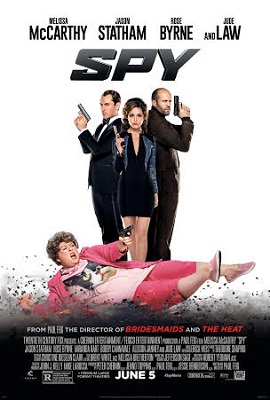 There were a lot of very good spy films released in 2015 and SPECTRE was not one of them.  In fact, the more I think about it, the more disappointed I am with the latest Bond film.  It’s not so much that SPECTRE was terrible as there just wasn’t anything particular memorable about it.  When we watch a film about secret agents saving the world, we expect at least a few memorable lines and performances.

Now, if you want to see a memorable spy movie, I suggest seeing Spy.  Not only is Spy one of the funniest movies of the year, it’s also a pretty good espionage film.  Director Paul Feig manages to strike the perfect balance between humor and action.  One of the joys of seeing CIA employee Susan Cooper (Melissa McCarthy) finally get to enter the field and do spy stuff is the fact that there are real stakes involved.  Susan is not only saving the world but, in the film’s best scenes, she’s having a lot of fun doing it and, for that matter, McCarthy is obviously having a lot of fun playing Susan and those of us in the audience are having a lot of fun watching as well.

Spy also features Jason Statham as a more traditional action hero.  Statham is hilarious as he sends up his own macho image.  Seriously, who would have guessed that he could such a funny actor?  Here’s hoping that he, McCarthy, and Feig will all return for the inevitable sequel. 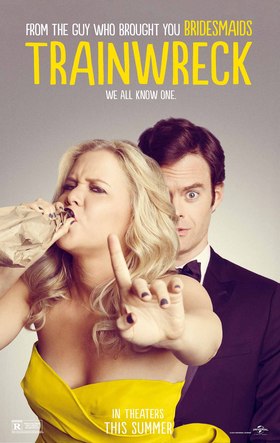 There’s a lot of great things that can be said about Trainwreck.  Not only was it the funniest film of 2015 but it also announced to the world that Amy Schumer’s a star.  It was a romantic comedy for the 21st Century, one that defied all of the conventional BS about what has to happen in a romcom.  This a film for all of us because, let’s just be honest here, we’ve all been a trainwreck at some point in our life.

But for me, the heart of the film was truly to be found in the relationship between Amy and her younger sister, Kim (Brie Larson).  Whether fighting over what to do with their irresponsible father (Colin Quinn) or insulting each other’s life choices, their relationship is the strongest part of the film.  If Brie Larson wasn’t already guaranteed an Oscar nomination for Room, I’d demand that she get one for Trainwreck.  For that matter, Amy Schumer deserves one as well.

Seriously, it’s about time the trainwrecks of the world had a film that we could truly call our own.