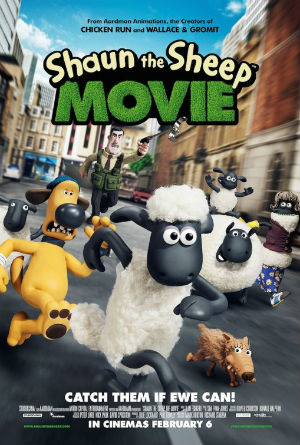 If you want to see a film that will truly make you happy and actually give you a reason to feel optimistic about the future of civilization, then you simply must see Shaun The Sheep, the new stop-motion animated film from Aardman Animations, the same people behind Wallace and Gromit.

The film tells the story of Shaun, a sheep who lives on Mossy Bottom Farm.  Though Shaun and the other sheep have a good relationship with both the farmer and the farmer’s dog, Bitzer, Shaun still finds himself growing bored with the monotonous routine of life on the farm.  He wants to take a day off and go down to the Big City.  (It’s even identified as being the “Big City” on a nearby road sign.)  Shaun comes up with a plan.  He and his fellow sheep trick the farmer into watching as they jump over a fence.  The farmer falls asleep.  They put the farmer in a trailer, the inside of which they’ve disguised to look like the farmer’s bedroom.  The farmer will sleep through the day and, by the time he awakens, Shaun will have returned from the Big City.

And it’s actually a pretty good plan but we all know what they say about the best laid plans of sheep and men.  The trailer ends up rolling away, eventually reaching the city.  Once the farmer wakes up, he gets a blow to head that causes him to develop amnesia.  However, despite not knowing who he is, the farmer has enough vague memories of shearing the sheep that he quickly finds work as a hair stylist.  Working under the name “Mr. X,” the farmer is soon a minor celebrity himself.

Discovering what the sheep have done, Bitzer goes to the city to search for the farmer.  When he doesn’t return, Shaun and the other sheep come to realize how much they actually did like life with the farmer.  They go to the city themselves, searching for both the farmer and Bitzer.  However, once they arrive, they find themselves being stalked by A. Trumper, a fanatical animal control worker.

(Shaun the Sheep is a remarkably good-natured film, with almost every human and animal being kind at heart.  Trumper is the only exception.)

Can Shaun protect the other sheep from Trumper?  Can they track down Bitzer and the farmer?  Will the farmer ever remember the simple joys of country life or will he live the rest of his life as Mr. X, hair stylist to the stars?  You’ll have to watch Shaun the Sheep to find out!

And you really should watch it!  Shaun the Sheep is one of the most delightful films that I’ve seen in a long time.  It’s the perfect movie for kids but, at the same time, it’s smart enough that adults will be able to enjoy it as well.  Yes, a huge part of the film’s appeal is that Shaun is just so cute!  But, at the same time, this cheerful animated film also manages to work in homages to everything from The Great Escape to Silence of the Lambs.  My personal favorite of the film’s many in-jokes was a nod to The Night of the Hunter and no, I’m not going to spoil it for you here.  Why?  Because I want you to see this movie and I want you to have the same joy of discover that I did!