Christopher Lee recorded this version of My Way for Revelation, a 2006 album of covers.  This video features Lee at his home in London’s Tufnell Park.

My Way was originally written by Paul Anka, who based the song on a French song called Comme d’habitude.  The song, of course, was made famous by Frank Sinatra but it’s also been recorded by everyone from Elvis to Sid Viscous to Jay-Z.  As for Lee’s version — well, whatever he may have lacked in vocal range was made up for by the fact that he was Christopher Lee!  As for the music video, how could any Hammer horror fan resist the chance to see the inside of Christopher Lee’s home?

There is a strain of melancholy running through Lee’s version but then again, I don’t know if it’s possible to record a non-melancholy version of My Way.  On the one hand, it’s a song of triumph.  On the other hand, it’s a song that acknowledges that we’re all mortal, even those of us who refuse to compromise and who maintain our independence.


This song, of course, has been around even longer than Bob Dylan.  It was originally published in 1941.  Frank Sinatra’s first ever solo recording was a performance of this song and he would later record two more versions of it, in 1947 and 1957.

The Bob Dylan version appeared on Dylan’s 36th studio album, Shadows in the Night.  (Shadows in the Night consists of covers of songs that Sinatra originally made famous.)  Dylan performed this song on the second-t0-last episode of Late Show with David Letterman.  Even though my musical taste usually runs the gamut from EDM to More EDM, I’ve always liked Bob Dylan.  David Letterman, on the other hand, I’m a bit less impressed with.  (Is he ever going to shave off that stupid beard?)

This nicely melancholy video feels like a throw back to the gangster films of the 30s.  Helping to create that retro atmosphere is the casting of Robert Davi, an actor who would have fit right in with Cagney, Bogart, and Edward G. Robinson.  Interestingly enough, Davi is also known as a skilled interpreter of Sinatra.

(He also once wished me a happy birthday, which was a nice of him.)

The wait is finally over, my new DirecTV receiver has arrived and is all hooked up! Unfortunately, all my DVR’d movies have vanished. And since it was filled to about 70% capacity, that’s a lot of movies! Needless to say, I’ve got to load up the ol’ DVR again. Thanks to TCM, I re-recorded one of my old favorites the other day, FOUR FOR TEXAS, an action-packed Western comedy I’ve seen about 100 times already (ok, that’s a slight exaggeration). This combines the two leaders of the Rat Pack, Frank Sinatra and Dean Martin , with the talents of director Robert Aldrich. The result is an all-star, slam-bang entertainment that is loads of fun for film fans. 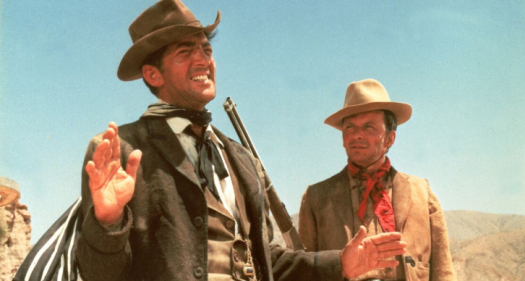 The pre-credits sequence looks like we’re about to watch a traditional Western, with a gang of outlaws led by Charles Bronson   riding out to ambush a stagecoach. But wait, that’s Frankie and Dino…

“Mr. Warmth”, the great Don Rickles, died yesterday at age 90. He was outrageous, rude, definitely non-PC, and hysterically funny. Rickles threw his verbal brickbats at everybody regardless of race, creed, national origin, or political persuasion, and it was all in good-spirited fun. There will never be another stand-up comic quite like Don Rickles, especially in today’s “safe space” world, and it’s a pity, because if we can’t all laugh at ourselves, if we can’t take a joke, then it’s time to pack it in.

Something I didn’t know about Don Rickles is he didn’t start out to be “The Merchant of Venom”. He intended to become a serious actor, studying at the prestigious American Academy of Dramatic Arts in Manhattan. Frustrated with his lack of acting jobs, Don began doing stand-up as a way to gain exposure. When he was heckled by some audience members, he heckled ’em right back…

I was doing a search on YouTube for Christmas specials, Christmas songs, and Christmas scenes when I came across The Dean Martin Christmas Show, which originally aired on December 21st, 1967.  It’s a Christmas show starring Dean Martin, Frank Sinatra, and their respective families.  Sure, some of the jokes may be corny but c’mon — it’s Frank and Dino!

Now, the video is occasionally a little rough.  I assume that this was copied from a VHS tape.  But no matter!  Not only does this special serve as a time capsule but it also serves as a valuable reminder that Christmas is even better when it features a little Rat Pack swagger!

(Post-election blues got you depressed? Cheer up, buttercup, here’s a movie musical guaranteed to lift your sagging spirits!)

Gene Kelly  and Frank Sinatra’s first screen pairing was ANCHORS AWEIGH, a fun-filled musical with a Hollywood backdrop that’s important in film history for a number of reasons: it gave Kelly his first chance to create his own dance routines for an entire film, it’s Sinatra’s first top-billed role (he was red-hot at the time), it gives viewers a glimpse of the MGM backlot in the Fabulous 40’s, and it features the iconic live action/animation dance between Kelly and Jerry the Mouse (of TOM & JERRY fame). It’s a showcase of Hollywood movie magic, and was nominated for five Academy Awards, including Best Picture, Actor (Kelly), Color Cinematography (Charles P. Boyle), and Song (Jule Styne & Sammy Cahn’s ” I Fall in Love Too Easily”), winning for George Stoll’s Best Original…

The National Pastime is just a frame for TAKE ME OUT TO THE BALL GAME to hang its picture in. That’s okay though, because producer Arthur Freed and the MGM Musical Dream Factory put together a rollicking, colorful romp with turn of the (20th) century baseball as an excuse to let Gene Kelly, Frank Sinatra , Esther Williams, Betty Garrett, and company razzle-dazzle us with plenty of songs, dancing, romancing, and comedy. 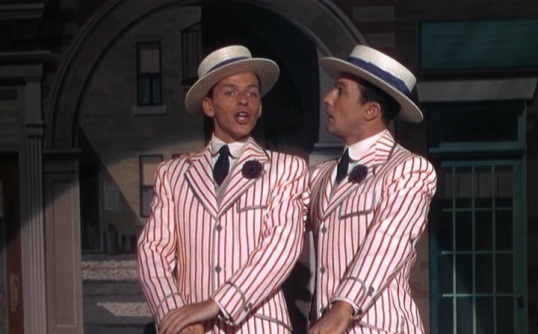 There’s not much of a plot in this outing. The World Champion Wolves are at spring training, awaiting the arrival of star diamond duo Eddie O’Brien and Denny Ryan, who’re off on a vaudeville tour. Eddie (Kelly) is a skirt chaser with Broadway dreams, while Denny’s (Sinatra) a shy, geeky guy who lives and breathes baseball. They get to camp just in time to hear the Wolves’ owner has died and left the club to his only relative, K.C. Higgins (Williams), who…