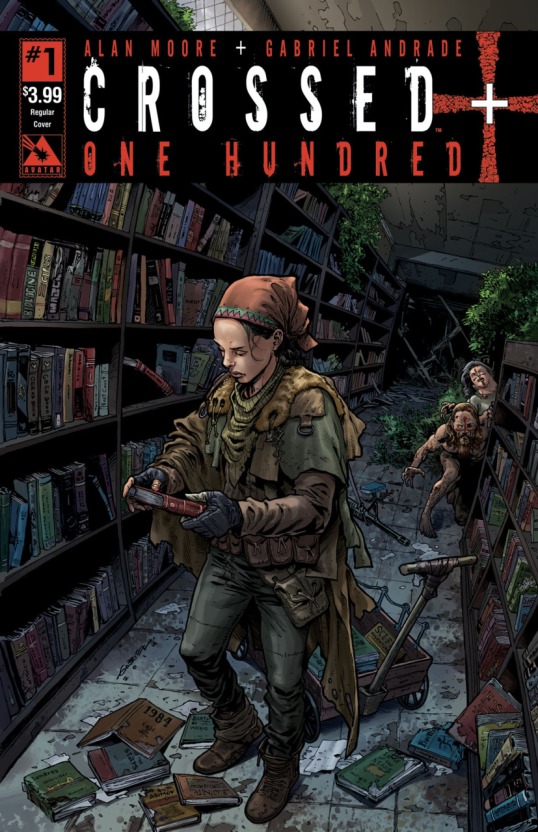 Who are we kidding? Of course I was gonna pick this book up — despite having no previous experience with, or knowledge of, the Crossed  “universe” — because, hey, it’s a new six-part Alan Moore series, and while there are very few creators who can “sell me” on a new title based on their involvement alone, Moore is (and frankly always will be) one of them. Still, for those (like myself) who need a brief history of the basic premise here before diving in, here goes —

Crossed is veteran comics writer Garth Ennis’ take on the zombie apocalypse. No one knows what caused it. The zombies are called “the crossed.” To date there have been several mini series set in this world, each featuring a different cast of characters. They’ve all been published by Avatar Press. That’s it. 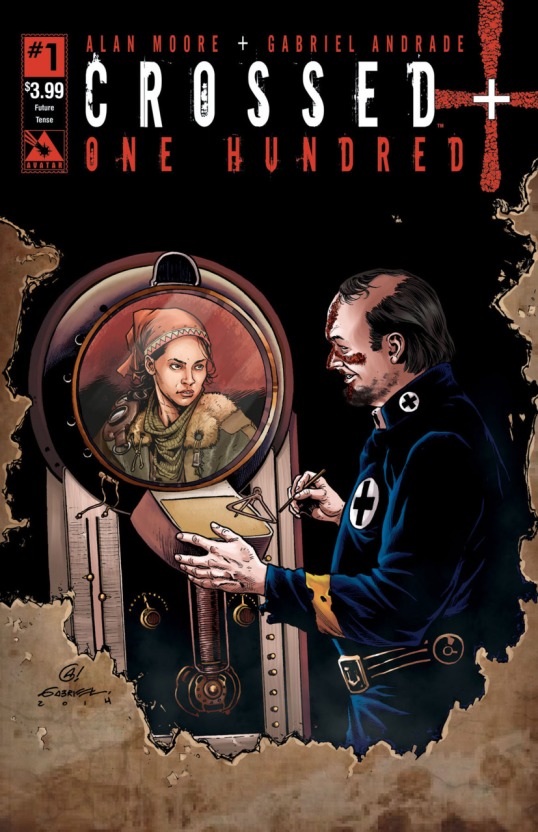 A threadbare setup? Sure. But that has its advantages — namely, other creators can jump in and provide their own unique take on the proceedings, and to date, many have (most notably David Lapham and Simon Spurrier). Now it’s Moore’s turn, and what’s not to be over-the-moon thrilled about? Rich, detailed, amazingly-well-realized speculative worlds have always been his stock in trade, going all the way back to Halo Jones, and with Crossed + One Hundred he’s taking us, as the title would imply, a century into the future after the dead got up and started walking around. The cast of characters is entirely new for this series, and if you’ve never read any Crossed comics before this,  you’ll do just fine.  So get it! Now, let me tell you why —

In truth, the aforementioned Halo Jones is a pretty apt comparison for what’s apparently going on here as a whole, since our protagonist, one Future Taylor, is a young lady trying to make her way in a world that both she, and we, don’t fully understand — and, as with Halo, Moore has created an entirely unique, dense-but-eminently-decipherable dialect for his characters to speak in. It may take one read-through or so to fully get your head around the various terms used, all of which have evolved from where our language is at right now, but that’s part of the fun here. For those who struggled with the first chapter of Moore’s prose novel, Voice Of The Fire, rest assured, this is nothing like that, and really, you’re not going to have too much difficulty figuring out what folks are saying.

I’m pleased to report both are astonishingly good. Moore has given us a rag-tag group of survivors, living in a converted steam train, that are immediately fascinating and complex. Ms. Taylor, our entry point into this great unknown, is the band’s “archivist,” a sort of scavenger of lost knowledge and information, and most of the action in this initial chapter takes place in an abandoned library that our intrepid nomads come upon. Through Future’s (an interesting thing to note here is how all the youthful characters have optimistic names) journal entries and her interactions with others we come to see her, in no time flat, as a strong-willed, inquisitive, multi-faceted woman who hopefully has what it takes to survive, and possibly even thrive, in this hostile world. There’s a lot of talk about “strong female characters” in various media this days, and within the space of about six pages Future Taylor puts the likes of Katniss Everdeen (or however you spell that) to shame by being a living, breathing, realistic person who just happens to have been born in a  time, and under a set of circumstances, that have caused human civilization to go down, to put it in the mildest possible terms, an unexpected path.

As for  for the other inhabitants of this perhaps-dystopian-and-perhaps-not makeshift “society” — knowledge and learning are at a premium here, since everyone knows so little of how they came to be in the world got to be in its current state and there’s no centralized education system (or, for that matter, centralized anything) left. I get the feeling that Moore intends to use this situation as a spring-board for exploring some of his well-known anarchist ideals, but we’ll see — I hate to predict any sort of plot trajectory with any degree of certainty when it comes to The Bearded One because his capacity to completely surprise us is so firmly established.

One thing he also firmly establishes here, though, is an overwhelming sense of dread. I mean, dread so thick you can cut it with a knife. Future and her cohorts only have the briefest of encounters with The Crossed in this first issue, and survive these skirmishes with relative ease, but there’s nothing but unease hanging over them from page one to page 24. It definitely takes skill to wring that much tension out of nearly-thin air, and if there’s one thing Crossed + One Hundred excels at right out of the gate it’s in imbuing its readers with a sense of confidence that they’re in mightily capable creative hands. Moore knows exactly where he’s going with this story, it’s just us readers — and his characters — who are in the dark. That makes for some page-turning excitement no matter how much — or even how little — is going on.

The art for this series is being handled by Gabriel Andrade, who has worked on a handful of other projects for Avatar in recent years, and  he does a really fine job here. His people look like — well, people — his monsters look suitably monstrous, and while there’s nothing particularly “flashy” about his style, his eye for detail is very welcome here as it takes more than words alone to bring a fully-fleshed-out alternate reality to life. Plus, he provided all eight of this first issue’s variant covers, so that speaks well of his ability to do a quality job even with the heaviest of workloads — I’m therefore reasonably optimistic that all six issues of this series will be coming out on time, and will manage to do so without looking half-assed or rushed.

Are you excited yet, friends? I sure hope so — and I know I am. The zombie apocalypse is certainly thoroughly -charted territory by now as far as genre premises go, but if anyone can breathe some new life into it and challenge, if not entirely overturn, our preconceived notions about what such a scenario would necessarily entail, it’s Moore and Andrade. These guys are bringing their “A game” and are flat-out eager to show us something new and entirely unexpected. This promises to be not just the Crossed story to beat all Crossed stories, but a seminal tale in the history of “zombie fiction” as a whole. The next four weeks can’t pass quickly enough, I’m completely hooked and counting down the days to the second issue.

And continuing our awards wrap-up, here are the 2014 NAACP Image Award nominations! 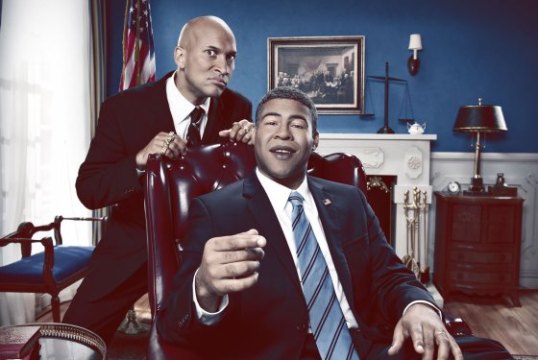 I have to admit that, when I first looked at the just-released Phoenix Film Critics Nominations for 2014, I got really excited.  I saw The LEGO Movie listed among the nominees for best picture and I thought to myself, “Oh my God!  Could The LEGO Movie be set to be the fourth animated film to score a best picture nomination from the Academy!?”

Seriously, my inner movie trivia lover was so excited!

Then, of course, I remembered that critical recognition doesn’t necessarily translate into Oscar nominations.  And I was forced to admit that The LEGO Movie probably will not be nominated for best picture, though it definitely remains a front runner for best animated feature.

But, for a few moments there, I was truly an excited Oscar watcher.

BEST ACTOR IN A LEADING ROLE

BEST ACTRESS IN A LEADING ROLE

BEST ACTOR IN A SUPPORTING ROLE

BEST ACTRESS IN A SUPPORTING ROLE

BEST SCREENPLAY ADAPTED FROM ANOTHER MEDIUM

OVERLOOKED FILM OF THE YEAR

BREAKTHROUGH PERFORMANCE BEHIND THE CAMERA

BEST PERFORMANCE BY A YOUTH – MALE

BEST PERFORMANCE BY A YOUTH – FEMALE