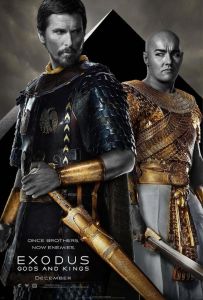 After Cecil B. DeMille’s 1956 epic “The Ten Commandments”, it’s pretty hard to come up with another story about Moses that comes as close to it. I’ll admit I have a personal love for 1998’s The Prince of Egypt.  Ridley Scott makes a great attempt in his new film “Exodus: Gods and Kings”, but it comes off feeling like the result of having one person relay a story to you through 3 other individuals. By the time the story reaches you, it’s no longer the same tale.

This is a hard review to write with regards to avoid spilling details.

Exodus follows the story of brothers Moses (Christian Bale – The Dark Knight Trilogy) and Ramses (Joel Edgerton – The Thing, The Great Gatsby), sons to the great Pharaoh of Egypt (John Turturro). Both brothers are seasoned warriors, but with the passing of Pharaoh, a truth is brought to light that forces Moses into exile. During his time away, he finds God and makes it his mission to free his people. Ramses refuses to listen to reason, and some drastic measures are taken to help convince him.

That sounds great on the surface, but it’s the execution that’s flawed. And this is Ridley Scott of all people. I loved Kingdom of Heaven and moderately enjoyed Robin Hood, but I just didn’t completely feel like I was invested in this film.

Biblical tales are tricky. Stick too close to the source material and you can have a heavy-handed story that says what it should, but could bore some audiences. Take too many liberties, and you can have audiences excited, but leave some upset or shocked at what’s presented (like with Scorsese’s The Last Temptation of Christ). Here, the liberties are taken to a place where most of the movie doesn’t even require Moses to be in it. The argument could be made that the other films did this too – that the acts occurred with Moses as a harbinger of what was to come. Exodus makes it more of a difference of opinion on how to handle Ramses. Moses elects for a more battle hardened strategy – let the people fight for themselves. This left me wondering where they found the time and freedom away from the Egyptian Soldiers to learn what they did.

On the flip side of the coin, God decides to handle it Their own way. This leaves our Moses in a position where he’s at odds with the Almighty, a sharp contrast to the Moses that followed the Word to the letter. To an audience that can’t help but make comparisons, it’s way off, though it’s supported by the theme that one shouldn’t say things just to placate others and that they should follow what they believe. What came before basically said..”Okay, I don’t know what your plan is, but you’ve shown me your wonders, I believe in you and you’ll guide me right.” Exodus says..”Okay, you’ve got a plan I’m not too cool with, so…uh…just give me a chance to save / warn the people before your wrath comes down.”

There were four writers on board for Exodus. Both Adam Cooper and Bill Collage worked together on Brett Ratner’s “Tower Heist” and Jeffrey Caine is known for “The Constant Gardner” and “Goldeneye”. Steven Zallian (Moneyball, The Girl With the Dragon Tattoo, American Gangster) was the fourth. I’m thinking with all those fingers in the pie, the movie was bound to go in a different direction. Again, it’s not terrible, just different.

The casting for Exodus is okay. The strongest performances go to both Bale and Edgerton, and I’ll state here that I had more fun watching Edgerton on screen than I did with Bale. I haven’t seen him play the villain like this since The Guardians of Ga’Hoole and he does a decent job here. Bale does well, but it’s like watching Batman again. Not saying he’s typecast because of it, but seeing Christian Bale yell is almost expected in a movie these days. Reunited with her Aliens director, Sigourney Weaver has about 10 to 15 minutes total of screen time in the film, and Ben Kingsley might have the same amount. Aaron Paul spends most of his time making that stare he does when he see something incredible. There’s not a lot for any of these actors to chew on, but they try their best with it.  Both Indira Varma (Game of Thrones) and Ewan Bremer (Jack the Giant Slayer, Trainspotting) are on hand as Ramses’ advisors. They don’t really count too much in all this.

Visually, the effects for the Plagues are very good. I honestly think those segments were the best in the entire film. The rest, I’m not so sure. The Red Sea sequence, when it happens, it done in such a way that the mysticism is just about sucked out of it. I’m sitting there hoping for a big reveal and found myself asking if that was it. Perhaps it was the angle where I was sitting or the theatre I saw it in, but it wasn’t as clear as it could be. It seemed like I was watching a 3D version of the film (I went for the regular one). The fight sequences were also done very well, many of which were similar to Ridley’s Robin Hood or Gladiator. Also note that at 154 minutes, it’s a long film. I pulled my iPod Nano out of my pocket twice to check the time.

As for the kid factor, I would say that teens and older can see this. There’s quite a bit of violence early on, along with some bloodshed, but nothing too extreme. In terms of sexual situations, there really aren’t any.

I think overall, my expectations for what this could be were larger than the final product. Had I never known of any film prior to this, Exodus would have more of an impact for me. As it stands, I’d watch it again, but probably when it hits Cable.