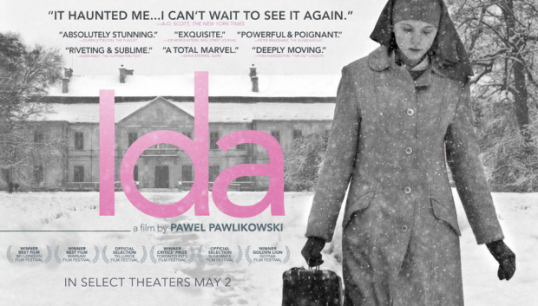 To the shock of many, Two Days One Night was not a semi-finalist!  That’s surprising, considering that Marion Cotillard’s performance has been receiving a lot of Oscar season attention.  If anything, the snubbing of Two Days One Night would indicate that Jennifer Aniston probably had a better chance of being the fifth Best Actress nominee than Cotillard.

The Canadian film Mommy was also not on the list of semi-finalists, which surprised many.  However, this does mean that Sasha Stone will now have something else to complain about over on Awards Daily.

And finally, the Palme d’Or winner Winter’s Sleep did not make the top 9 either.

What did make the top 9?

Check them out below!

The Florida Film Critics have voted and they’ve named Birdman the best film of 2014!  You can find all of the Florida winners below and check out the Florida nominees by clicking here!

Runner-up: Guardians of the Galaxy

Under the Skin (Micah Levi, aka Micachu)

Runner-up: How to Train Your Dragon 2

Gone Girl, which — with the exception of Rosamund Pike’s performance — has not quite been the precursor powerhouse that some were expecting it to be, was named best picture by the Nevada Film Critics!

(I’m actually enjoying the precursors this year.  They’re spreading the wealth around, as opposed to every critics group moving in lockstep and slavishly honoring only one film, like they did with The Social Network.)

Check out the rest of their winners below!

You’re never gonna believe me when I say this given how mercilessly I’ve been shilling for the guy’s recent work, but — I’m honestly not the world’s biggest Grant Morrison fan. As is the case with out esteemed fellow TTSL scribe Arleigh, his work has always been very much a “hit-or-miss” affair with me, and while I loved The Invsibles, The Filth, and his now-legendary runs on Animal Man and Doom Patrol, a lot of his more-celebrated efforts — such as his runs on JLA, New X-Men, and even Batman — were decidedly “meh” affairs in my book, that certainly never veered into actively bad territory but were, nevertheless, largely unmemorable. They had their moments, of that there’s no doubt,  but I felt that they were too few and far between to really stand out all that much.

And we won’t even mention his flat-out offensive analysis of the super-hero phenomenon in general,  Supergods, which dubiously posited that Jerry Siegel and Joe Shuster were not, in fact, the creators of Superman, but merely the human vessels through which this timeless ideal that was floating around in the ether decided to express itself. Guess DC doesn’t owe either of them a dime, then, do they, Grant?

Still, I gotta call it like I see it, and despite the fact that I don’t have much reason to “root” for Morrison personally, it can’t be denied that he’s in the midst of arguably his strongest period as a creator right now, and I don’t say that simply because of the runaway artistic and commercial success that is The Multiversity (although that’s a big part of it, to be sure) — I also say it because, flying far underneath the the cover of hype generated by that blockbuster project (hype which I’m guilty of contributing to in my own small way with my glowing reviews for its last couple of issues),  there’s a little six-part series he’s doing with artist extraordinaire Frazer Irving for Legendary Comics called Annihilator that’s flat-out blowing the minds of the (apparently) few of us who are reading it. 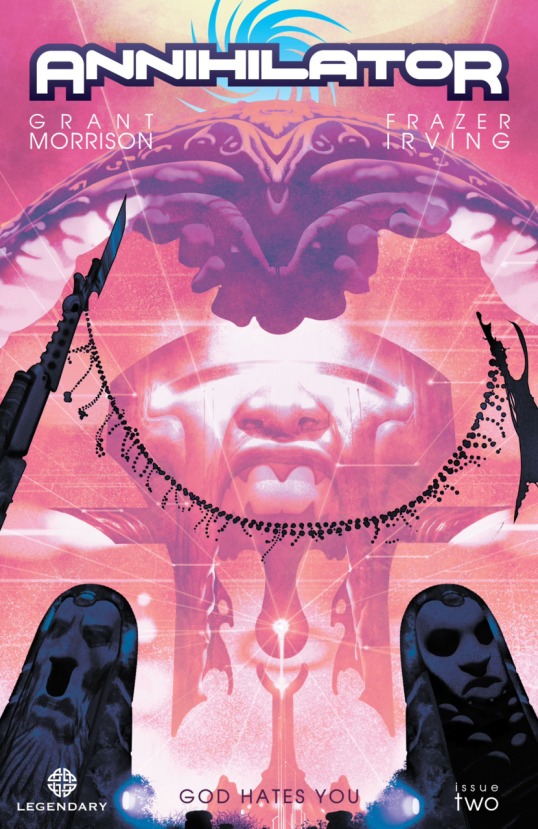 I’ve gotta be honest here — I have no idea why this book isn’t generating a more significant level of “buzz” than it’s managed to so far : maybe it’s because for all their Hollywood dollars and clout Legendary doesn’t seem to be putting much promotional muscle behind their comics line; maybe it’s because the subject matter of the series is too outre for all but the most hardened sci-fi fans to wrap their heads around; maybe it’s because neither of the main characters in the story are in any way “likable”; maybe it’s because The Multiversity is sucking all the oxygen out of the room when it comes to current Morrison work and there’s just not much energy left to heap praise on this title; or maybe it’s some combination of all those elements.

Whatever the case may be, though, it’s kind of a bummer, because four parts in it’s apparent that this is one of the most complex, challenging, interesting, and fun projects to come down the pipeline this year and would definitely be a shoo-in to be near the top of any “Top 10 Comics Of 2014” list I would cobble together if such rankings interested me in any way — which they don’t.

Think about it for a second : here we’ve got a veteran writer (ranked as the number two comics author of all time in the CBR poll that was just released earlier today — oh yeah, what was it I just said about not caring about “best of” lists again?) operating at the top of his game paired up with an up-and-coming “hot property” artist who’s doing career-defining work with this series and yet the whole thing seems to be going more or less unnoticed and is selling only a fraction of the number of copies each month of middling super-hero fare like, I dunno, Batwoman or Cyclops — both of which were recently cancelled by DC and Marvel, respectively, due to low sales. Something just ain’t right with this picture.

Well, never let it be said that I’m unwilling to get up on my soapbox and cheerlead for a comic that not enough people are paying attention to, because I’m here to tell you that if you like superbly-illustrated, high-concept, Philip K. Dick-style fuck-with-your-head science fiction, then you absolutely have to get caught up on Annihilator right now.

Here’s a brief rundown of the particulars just to whet your appetite : Ray Spass (pronounced “space”) is an asshole. A Hollwood screenwriter whose career trajectory is headed straight down, he hopes to get back on the “A List” with his new project, which is a script (called , you guessed it, “Annihilator”) about another asshole, a formerly-high-flying intergalatic criminal named Max Nomax who is imprisoned in orbit around the black hole ( named — wait for it — “The Annihilator”)  at the center of the Milky Way and is using his time there to try to bring the love of his life back from the dead.

You have to hand it to Max — he doesn’t think small. The problem is, he doesn’t know how his story ends, and in order to find out, he has to become real, and pay a visit to his writer.

The first three issues really cause the reader to question how much of this is really happening and how much is the result of fevered hallucinations brought on by an inoperable brain tumor that’s afflicting Ray, and while the fourth chapter goes some way toward resolving that question, it raises plenty of new ones at the same time, chief among them — okay, if this is real, and Max needs Ray to keep working on his script in order to lay out the course of his life for him, then how is it happening — and why? 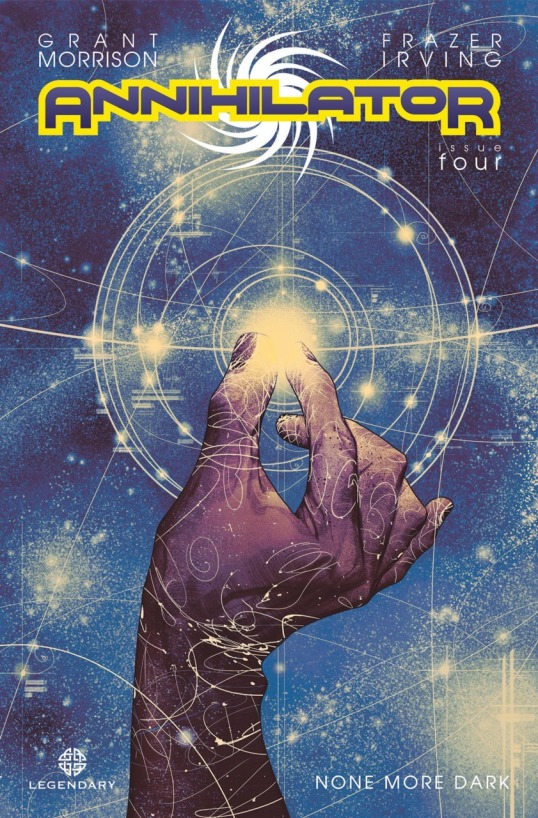 Intrigued yet? I can assure you that my brief synopsis only skims the surface of all that’s happening here, and that this is a book that certainly rewards multiple re-reads as it goes about laying its foundation of carefully-constructed twists and turns. It’s hard to say at this just-beyond-mid-way point how many seemingly disparate elements will be woven into the final pattern that Morrison is knitting here and how many will turn out to be throwaway “red herrings,” but my money is on “everything here matters in some way, shape, or form, and not even the smallest detail will go to waste once it’s all said and done,” as each successive installment to date has proven to be a further measured layer of intricacies built upon what’s gone before. A picture that began as convoluted is coming into view more clearly as events progress, even if it’s still largely obscured and even if, as just mentioned, every answer has a tendency to elicit about a dozen new questions.

And yet for all that story awesome-ness, I’m still not prepared  to say whether or not the (admittedly superb) writing is the real “star” of the show here, though, so polished and expressive is Irving’s art. I’d kill for an original page or two — any original page or two — from this series, as they’re all flat-out breathtaking and of “suitable for framing” quality. If you’re a big time “art geek” like I am, prepare to spend a lot of time “ooh”ing and “aah” ing to the — no exaggeration — unfolding series of wonders on display here. Irving has gone from being a “guy to watch” to a “guy to follow” to a “guy others will no doubt try to imitate” over the short space of four months (oh yeah, did I mention that each issue so far has even managed to come out on time?),  and you might as well get used to his name, because you’re bound to be hearing it a lot in the years to come.

I think I’ve pretty well exhausted my supply of compliments and superlatives at this point, so — yeah. Annihilator. Get it. Now.

Oh, and tell your friends, too — it”s not too late to build some genuine momentum for this book as it steamrolls headlong toward what’s sure to be a memorable conclusion.

The Oscar precursor race — which started out with Boyhood and Birdman basically winning everything — has gotten a little bit more interesting over the past week or so.  Other movies have been picking up awards.  For instance, Wes Anderson’s The Grand Budapest Hotel!

On December 22nd, the Southeastern Film Critics named their picks for the best of 2014.  And here are the winners!

Best Actor
1. Michael Keaton, Birdman or (the Unexpected Virtue of Ignorance)
2. Eddie Redmayne, The Theory of Everything

Best Ensemble
1. The Grand Budapest Hotel
2. Birdman or (the Unexpected Virtue of Ignorance)

The Gene Wyatt Award for the Film that Best Evokes the Spirit of the South
1. Selma