So, Christmas is over and, at this point, you’re probably sick of hearing about Christmas movies.  However, before we say goodbye to 2014 and welcome the new year, I wanted to take this opportunity to tell you about two new holiday films that I saw this month. 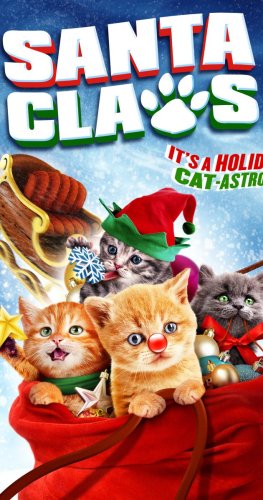 Directed by Glenn Miller and produced by the wonderful people at the Asylum, Santa Claws tells the story of what happens when Santa Claus comes into contact with three adorable kittens.  Unfortunately, it would appear that Santa is highly allergic to cats and he ends up sneezing so much that he falls off the roof of a house.  Of course, this means that it’s up to the three kittens to climb into Santa’s sleigh and deliver the rest of the gifts.  Fortunately, Santa’s sleigh is equipped with a GPS system and two talking reindeer.

Did I mention that the kittens can talk too?

Because they so totally can!

Okay, okay — this is the type of low-budget, straight-to-DVD family film that critics are always snarky about.  But you know what?  I’m a cat person and I think kittens are the cutest things in the world.  And when they’re capable of talking, it’s even better!  Whatever flaws the movie may have had (and it had more than a few), the kittens were cute and really, that’s all that matters.

Add to that, Santa Claws was full of Asylum in-jokes.  For instance, one creepy, Santa-obsessed character also happens to love (and own) Sharknado.  When the kittens pulls up the list of who has been naughty and who has been nice, one of the names at the top of list is that of frequent Asylum actor (and star of A House Is Not A Home) Gerald Webb.

Ultimately, Santa Claws is cute fun for cat lovers.  Watch it on a double bill with the Grumpy Cat Christmas movie. 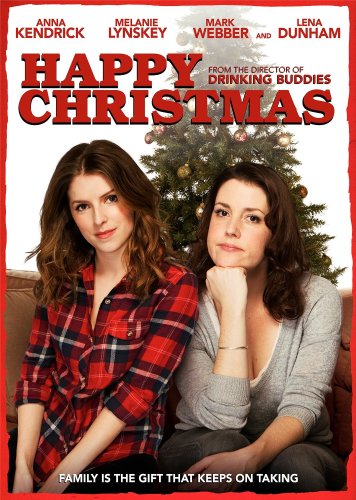 And, after you watch Santa Claws, you can watch a film that basically takes place in an entirely different universe.  Happy Christmas was this year’s film from director Joe Swanberg.  Swanberg, of course, is one of the major figures in the mumblecore movement, making films that feature improvised dialogue and which treat the mundane realities of life with the same reverence that most mainstream films reserve for chase scenes and CGI explosions. Swanberg’s previous film, Drinking Buddies, was one of the best of 2013.

Happy Christmas never works as well as Drinking Buddies but fans of both Swanberg and the mumblecore movement will probably enjoy it.  Anna Kendrick plays Jenny, an irresponsible woman who might be an alcoholic.  When she breaks up with her boyfriend, Jenny ends up moving in with her older brother Jeff (played by Joe Swanberg, himself).  The rest of the film follows Jenny as she goes to parties with and embarrasses her friend Carson (Lena Dunham), dates an amiable pot dealer named Kevin (Mark Webber), and bonds with Jeff’s wife, Kelly (Melanie Lynesky).

Kelly is a novelist who has been suffering from writer’s block.  With the help of Jenny and Carson, she starts to work on what Jenny refers to as being a “trashy, sexy mom novel.”  Probably the best scene in the film features Jenny, Carson, and Kelly just sitting around and debating the best euphemisms to use while writing a sex scene.

(As well, I think that any writer can relate to Kelly’s situation here.  Who hasn’t been tempted to just sell out and just write something that’s totally commercial and goes against every idealistic dream you’ve ever had about being a serious writer?)

Many viewers will probably dismiss Happy Christmas as being a film where nothing really happens but I think they’re being shortsighted.  There’s a lot going on in Happy Christmas — you just have to be willing to look underneath the surface.  Though Happy Christmas rejects the melodramatic conventions that we’ve come to expect from most movies, that doesn’t mean that the film itself is plotless.  By the end of this rather short film, neither Kelly or Jenny is the same person that she was at the start of the film.  They’ve both changed for the better but — much as in real life — that change isn’t always obvious.  But the change is there, waiting to be discovered by those perceptive enough to notice.

Finally, it’s interesting to see both Anna Kendrick and Melanie Lynesky playing against type here.  Kendrick especially seems to be having a lot of fun, finally getting to play a character who doesn’t always do the right thing.

And so, next Christmas, watch Happy Christmas when you want to think and watch Santa Claws when you need an excuse to go, “Awwwwww!”