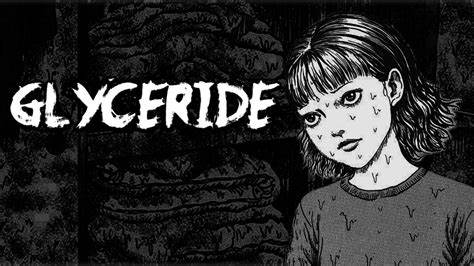 While Junji Ito’s work has been done both in long-series format and novella-style stand-alone, most of his work has been through short story collections which has been collected in tanboko collections. It’s with some of his short stories that themes really shine through despite their short length. He’s able to disturb unnerve, disgust and horrify a reader with a quick read than most horror writers and filmmakers have tried using much longer formats.

One such short tale is “Glyceride.”

“Glyceride” is chapter 5 of his collection of one-shot stories in the collection Yami no Koe (Voices in the Dark). It tells the tale of a girl named Yui whose family owns a barbecue restaurant (city or town never mentioned other than it has a clear view of Mt. Fuji) in town. The place is always dark, dirty and there’s a heavy atmosphere of grease permeating everything in the place.

It’s this sense of grease both literal and figuratively which creates that sense of otherworldly horror and uneasiness. Ito’s artwork makes one feel the very grease the tale’s protagonist speaks about to such a level that, at least for me, one would need to take a thorough shower once done.

While the story is quite brief it leaves a definite imprint on the reader. Below is the anime adaptation of the short story.