Earlier this week, when I reviewed the obscure Sissy Spacek film Katherine, I mentioned that I had seen Katherine as one of the three films included on the Classic Films of the 70s DVD.  The other two films included on the DVD were Born to Win and The Harrad Experiment.  Now, I have to admit that I’m having trouble recalling much about Born To Win but The Harrad Experiment … seriously, that’s a film that I’ll never forget.

First released in 1973 and reportedly based on a “daring” book about the sexual revolution, The Harrad Experiment opens with Sheila (Laurie Walters) hugging a tree and it’s all downhill from there.

Sheila is excited because she’s just enrolled at Harrad College, an experimental school that’s run by Prof. Stuffy Q. Borington (James Whitmore) and his wife, Cougar Milf (Tippi Hedren).  Okay, I made up those two names.  Prof. Borington is actually named Philip Harrad and his wife is named Margaret but seriously, I like my names for them better.  Anyway, Philip and Margaret are obsessed with the need for society to throw off the shackles of sexual repression and Harrad College’s entire curriculum is devoted to students debating monogamy, taking yoga classes, and standing in a circle while holding hands and chanting, “Zoom.”  Everyone has a roommate of the opposite sex and they’re encouraged to have sex with every other student enrolled at the college.  (Interestingly enough, all of the students at the college appear to be heterosexual.)

Sheila, it turns out, is not only a virgin but is also so extremely prudish that you have to kind of wonder why she enrolled at Harrad College to begin with.  Her roommate Stanley (Don Johnson, who was so criminally hot here that it’s hard to believe that he would eventually end up playing the loathsome Big Danny Bennett in Django Unchained) has the opposite problem.  Stanley’s a long-haired rebel type and both Philip and Margaret are worried that he’s mostly attending their sex school because he just wants to get laid as opposed to getting laid and then discussing the social ramifications of getting laid.

Now, you’re probably thinking that The Harrad Experiment, being a film about sex, would feature a lot of sex.  Well, you would be wrong.  Instead, there’s a lot of scenes of Philip smoking a pipe and talking about sex and explaining why the concept of marriage is a dying one.  At one point, a students asks Philip to explain why, if he believes that, he’s still married to Margaret.

“We represent the past,” Philip explains, which is seriously such a cop-out.

(While I agreed with a lot of what Philip had to say about the prudish ways of our hypocritical society and I’m certainly not a believer in traditional marriage, I still found myself wondering what one would actually do with a degree from Harrad College.  This led to me imagining that annoying Everest College pitchman doing commercials for Harrad College — “You’re spendin’ all day on the couch, you ain’t getting none…” — and I started giggling for so long that I temporarily forgot that I was watching a movie.)

While there isn’t much sex, there is a lot of nudity and almost the entire cast (except for Whitmore, Hedren, and Fred Willard — yes, Fred Willard is in this movie) appears naked at some point.  That’s pretty good when it’s someone like Don Johnson but, unfortunately, the majority of the cast is made up of people like this guy: 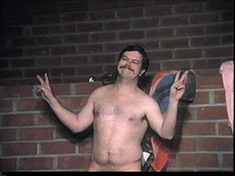 The Harrad Experiment is a slow, boring, and bad film but it’s one that everyone should see at least once, if just so they can say that they’ve seen it.  If nothing else, it’s a time capsule of the late 60s and the early 70s and we all know the only saying about those who forget the past.