One of the great things about being an online film critic is that you occasionally come across a good but obscure film that you can then let the rest of the world know about as well.  Katherine is one such film.

I came across Katherine as part of a 3-film compilation DVD called Classic Films Of The 70s.  The other two films on the DVD were The Harrad Experiment and Born To Win and both of those films were so bad that I nearly tossed the DVD to the side without watching Katherine.  I’m glad I changed my mind because, while it may not have truly lived up to the promise of being a classic film of the 70s, Katherine was still a thousand times better than The Harrad Experiment.

Beginning with the idealism and hope of the early 60s and ending with a literal bang in the 70s, Katherine tells the story of how one woman is transformed from being a sheltered, upper class liberal to being a political revolutionary who is proud to embrace violence in order to bring about change.  Katherine ( Sissy Spacek, before she was Carrie) starts out as a teacher before falling in love with a civil rights activist (played, in a nicely smarmy performance, by Henry Winkler).  Against the backdrop of the Viet Nam War and the violence of the late 60s, Spacek and Winkler gradually become more and more radicalized until they eventually go underground and turn violent.  The film is made up of interviews with people who knew Katherine and Katherine herself even pops up and tells us her own version of her story.  Despite being forced to wear a horrid wig in the latter half of the film, Sissy Spacek gives a wonderfully empathetic and multi-layered performance as Katherine.  Even if you don’t always like the self-righteous stridency of the character, you never doubt her sincerity.

After I watched Katherine, I did a little research on the IMDb and I discovered that Katherine was a made-for-TV movie that was originally broadcast in 1975.  This did not surprise me because,  even as I was watching it, it was very easy to imagine a remake of Katherine (starring, I decided after much debate, Leighton Meester) being broadcast on the Lifetime Movie Network.  However, if Katherine felt like a Lifetime movie  with a political subtext, that’s only because I happen to love Lifetime movies.  Katherine is both an intelligent and interesting look at a very specific period of American history and a portrait of youthful idealism, disillusionment, and wanderlust.  We have all had to deal with that moment when our beliefs run into the wall of reality and Katherine captures that experience perfectly.

I found myself thinking about Katherine earlier today as I watched the presidential inauguration in Washington D.C.  Though the film might be close to 40 years old, its portrait of naive idealism, political stridency, and destructive activism still feels relevant.  Katherine is a film that most people have never heard of but it’s also one that is worth tracking down.

It’s time for another edition of Lisa Marie’s Favorite Grindhouse and Exploitation Film trailers.  The trailer kitty is ready!  Are you?

The trailer almost feels like a parody of a generic action movie trailer.  However, I’ve done the research and apparently, this is an actual film.

I recently got this one on DVD but I haven’t watched it yet.  Any film from the 60s that features James Coburn and love beads is worth watching.

This is another one that I’ve got on DVD but have yet to watch.

I think I’ve shared both this and the next trailer before but with it being National Rah Rah Rah Day and all, I figured why not share it again? 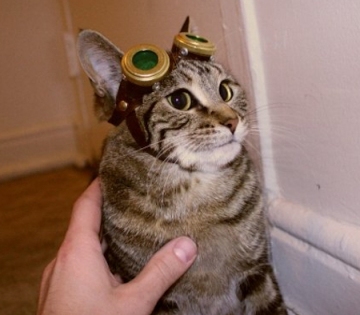 He’s thinking about it.