In 1981, director Hal Needham and star Burt Reynolds had a surprise hit with The Cannonball Run.  Critics hated the film about a race from one end of America to the other but audiences flocked to watch Burt and a group of familiar faces ham it up while cars crashed all around them.  The original Cannonball Run is a goofy and gloriously stupid movie and it can still be fun to watch.  The sequel, on the other hand…

When the sequel begins, the Cannonball Run has been discontinued.  The film never explains why the race is no longer being run but then again, there’s a lot that the sequel doesn’t explain.  King Abdul ben Falafel (Ricardo Montalban, following up The Wrath of Khan with this) wants his son, The Sheik (Jamie Farr, returning from the first film) to win the Cannonball so he puts up a million dollars and announces that the race is back on.  Problem solved.

With the notable exceptions of Farrah Fawcett, Roger Moore, and Adrienne Barbeau, almost everyone from the first film returns to take another shot at the race.  Burt Reynolds and Dom DeLuise are back.  Jack Elam returns as the crazy doctor, though he’s riding with the Sheik this time.  Jackie Chan returns, riding with Richard “Jaws” Kiel.  Dean Martin and Sammy Davis, Jr. return, playing barely disguised versions of themselves.  They’re joined by the surviving members of the Rat Pack.  Yes, Frank Sinatra is in this thing.  He plays himself and, from the way his scenes are shot, it’s obvious they were all filmed in a day and all the shots of people reacting to his presence were shot on another day.  Shirley MacClaine also shows up, fresh from having won an Oscar.  She plays a fake nun who rides with Burt and Dom.  Burt, of course, had a previous chance to co-star with Shirley but he turned down Terms of Endearment so he could star in Stroker Ace.  Cannonball Run II finally gave the two a chance to act opposite each other, though no one would be winning any Oscars for appearing in this film.

Say what you will about Hal Needham as a director, he was obviously someone who cultivated a lot of friendships in Hollywood because this film is jam-packed with people who I guess didn’t have anything better to do that weekend.  Telly Savalas, Michael V. Gazzo, Henry Silva, Abe Vigoda, and Henry Silva all play gangsters.  Jim Nabors plays Homer Lyle, a country-fried soldier who is still only a private despite being in his 50s.  Catherine Bach and Susan Anton replace Adrienne Barbeau and Tara Buckman as the two racers who break traffic laws and hearts with impunity.  Tim Conway, Don Knotts, Foster Brooks, Sid Caesar, Arte Johnson, Mel Tillis, Doug McClure, George “Goober” Lindsey, and more; Needham found room for all of them in this movie.  He even found roles for Tony Danza and an orangutan.  (Marilu Henner is also in the movie so I guess Needham was watching both Taxi and Every Which Way But Loose while casting the film.)  Needham also came up with a role for Charles Nelson Reilly, who is cast as a mafia don in Cannonball Run II.  His name is also Don so everyone refers to him as being “Don Don.”  That’s just a typical example of the humor that runs throughout Cannonball Run II.  If you thought the humor of It’s A Mad, Mad, Mad, Mad World was too subtle and cerebral, Cannonball Run II might be right up your alley.

The main problem with Cannonball Run II is that there’s not much time spent on the race, which is strange because that’s the main reason why anyone would want to watch this movie.  The race itself doesn’t start until 45 minutes into this 108 minute film and all the racers are quickly distracted by a subplot about the Mafia trying to kidnap the Sheik.  Everyone stops racing so that Dean Martin and Sammy Davis, Jr. can disguise themselves as belly dancers to help rescue the Sheik.  By the time that’s all been taken care of, there’s only 10 minutes left for everyone to race across the country.  After a montage of driving scenes and a cartoon of an arrow stretching across the nation (the cartoon was animated by Ralph Bakshi!), we discover who won the Cannonball and then it’s time for a montage of Burt and Dom blowing their lines and giggling.  Needham always ended his films with a montage of everyone screwing up a take and it’s probably one of his most lasting cinematic contributions.  Every blooper reel that’s ever been included as a DVD or Blu-ray extra owes a debt of gratitude to Hal Needham.  Watching people blow their lines can be fun if you’ve just watched a fun movie but watching Burt and Dom amuse themselves after sitting through Cannonball Run II is just adding insult to injury.  It feels less like they’re laughing at themselves and more like they’re laughing at you for being stupid enough to sit through a movie featuring Tony Danza and an orangutan.

The dumb charm of the first Cannonball Run is nowhere to be found in this sequel and, though the film made a profit, the box office numbers were still considered to be a disappointment when compared to the other films that Reynolds and Needham collaborated on.  Along with Stroker Ace, this is considered to be one of the films that ended Reynolds’s reign as a top box office attraction.  Cannonball Run II was also the final feature film to feature Dean Martin and Frank Sinatra.  This could be considered the final Rat Pack film, though I wouldn’t say that too loudly.

Cannonball Run II is a disappointment on so many levels.  It’s hard to believe that the same director who did Smokey and the Bandit and Hooper could be responsible for the anemic stunts and chases found in this movie.  The cast may have had a good time but the audience is left bored.  Stick with the first Cannonball Run. 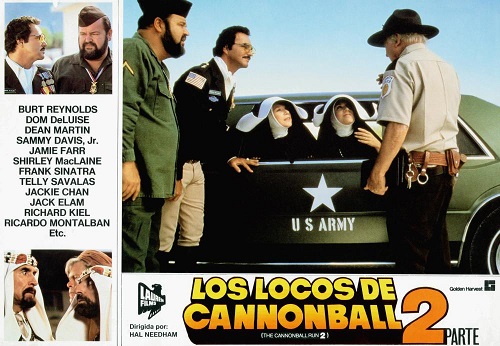 I came across this old cartoon on YouTube.  Apparently, it aired in October of 1983.

It’s about bears living in Bearbank.  Halloween is approaching and they’re worried about getting invaded by the monsters who live on Monster Mountain.  Well, that makes sense.  My question is why would you buy a house near a location called Monster Mountain?  And really, shouldn’t the monsters be in the houses and the bears in the mountains?  This cartoon is weird.

Anyway, the bears are getting ready to feel the city but little Ted E. Bear sets out to confront his fears!  Woo hoo!

Let’s get it out of the way right now- SEX KITTENS GO TO COLLEGE is bad. Real bad. Like mind-numbingly bad. Despite the presence of sex kittens Mamie Van Doren and Tuesday Weld, this movie is a smelly litter box in desperate need of cleaning. It’s an Albert Zugsmith extravaganza, so you know right off the bat it’s gonna be a stinker. Zugsmith had once been a producer at Universal, overseeing prestige films like WRITTEN ON THE WIND and TOUCH OF EVIL. But when he went into independent productions, Zugsmith chose to go the low-budget exploitation route and even though he managed to attract some well-known names, his little epics usually stunk to high heaven.

The movie revolves around the talents of Mamie Van Doren, a beautiful creature whose best assets weren’t her acting. She plays Dr. Mathilda West, a genius hired to take over the science department at Collins College. Thinko, a supercomputer/robot type thing…