If you were awake at 2 in the morning last night, you could have turned over to Starz and watched the 1998 film, Great Expectations.

Great Expectations is an adaptation of the famous novel by Charles Dickens, the one about the orphan who helps a fugitive, is mentored by a bitter rich woman who lives in a decaying mansion, falls in love with the beautiful but cold-hearted Estella, and then later is helped out by a mysterious benefactor.  The thing that sets this adaptation apart from other version of the novel is that the 1998 Great Expectations is set in modern-day America, as opposed to Victorian-era Great Britain.

Actually, beyond retaining certain aspects of the plot, it’s interesting how little this version of Great Expectations has to do with the original novel.  That’s not necessarily a bad thing.  While Charles Dickens deserves to be remembered as one of the fathers of modern literature, he could also be a terribly pedantic writer.  This adaptation only touches on the novel’s overriding concerns about class and wealth in the most simplistic of ways.  It also abandons most of the novel’s subplots and instead concentrates on the love story between Estella (Gwynneth Paltrow) and Finn (Ethan Hawke).

Oh yeah, did I mention that?  The hero of this version of Great Expectations is not named Phillip Pirrip and we never have to listen to him explain that, as a child, he was nicknamed Pip because he apparently could not speak.  Instead, Pip has been renamed Finn, short for Finnegan.  If you believe the trivia section of the imdb, Finn was apparently the name of Ethan Hawke’s dog.  And again, that’s not necessarily a bad thing.  One of the main reasons why so many readers automatically dislike the narrator of Great Expectations is that he is named Pip.

Anyway, in this version, Finn grows up in Florida, an orphan who is raised by his blue-collar brother-in-law, Joe Gargery (Chris Cooper, giving a very Chris Cooperish performance).  The escaped convict is played by Robert De Niro and, towards the end of the film, there’s a hilarious scene where Finn and the convict meet for a second time and Finn somehow does not recognize him, despite the fact that he still pretty much looks the same and still acts exactly like Robert De Niro.  The eccentric woman who mentors the young Finn, Mrs. Dinsmoor, is played by Anne Bancroft and Bancroft, made up to look like Bette Davis in What Ever Happened To Baby Jane?, gives a performance of almost transcendent weirdness.  And, of course, Estella — who has been raised to seduce and then destroy men — is played by Gwynneth Paltrow and, as usual, Paltrow is a lot more believable when Estella is remote and self-centered than when she has to soften up towards the end of the film.

It’s an odd film, to be honest.  This is one of those films that you watch and you try to be cynical but it’s all so lushly shot and deliriously (and manipulatively) romantic that you can’t help but occasionally get wrapped up in its spell.  Hawke and Paltrow, both of whom are incredibly young in this movie, may not have much chemistry but they’re both so achingly beautiful that it almost doesn’t matter.

Great Expectations was the second film to be directed by Alfonso Cuaron and it’s just as visually stylish as his later films.  It’s a frequently shallow and somewhat silly film but oh my God, is it ever pretty to look at. 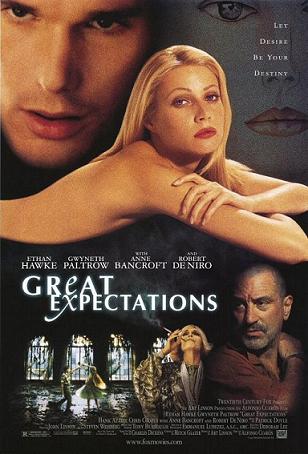