If, around 2 in the morning on Saturday, you were having trouble getting to sleep, you could have turned over to Cinemax and watched the 2005 film, Elektra.

Elektra (Jennifer Garner) used to be dead but now she’s alive again.  She was killed during the 2003 film, Daredevil, but, two years later, she was resurrected by a blind martial artist named Stick (Terence Stamp).  Stick taught her how to not only fight but also how see into the future, which I guess is helpful if you have to decide whether or not to throw one of those little knife things at someone.  (As you can tell, I’m definitely the expert when it comes to martial arts and ninja assassins.)

Elektra uses her training to become the world’s most deadly assassin, which is probably not what Stick had intended but what’s he gong to do, right?  However, when Elektra is ordered to kill a totally hot guy and his 13 year-old daughter, she starts to have doubts about whether or not being a murderer-for-hire is really for her.  And can you blame her?  Not only do you not get to make many friends but I imagine that you’re also constantly having to buy new arrows for your crossbow and that has to get expensive at some point.

So, Elektra decides not to kill the hot guy or his daughter but it tuns out that an evil group of ninjas called The Hand are determined to kill the guy anyway and apparently his daughter is perhaps destined to maintain the balance between the forces of good and evil.  (Don’t ask me, I didn’t write the script.)  Elektra has to take it upon herself to defeat the Hand and hopefully ensure that the hot guy’s daughter gets to enjoy her adolescence without having to worry about balancing killing people with school work.

Elektra was released with a lot of fanfare back in 2005.  It didn’t do particularly well at the box office, which apparently led to Marvel getting into their head that no one would pay money to see a comic book film with a female hero.  (This belief was disproven 12 years later, with Wonder Woman.)  Today, in the wake of the MCU and whatever DC calls their cinematic universe, Elektra feels almost like a relic.  It’s a film that lacks of the self-awareness of the later comic book films but it also never matches them in their scope or their ability to make us feel as if we’ve entered into a separate, fully functioning universe.  Elektra is from the age when comic book movie didn’t want to admit that they were comic book movies.

It’s a silly film but, at the same time, it can be kind of fun if you’re in a particularly undemanding mood.  Watching it last night, I was shocked to be reminded of the fact that there was a time when Jennifer Garner actually kicked serious ass.  The fight scenes are fun to watch, mostly because it’s a woman who gets to beat everyone up.  The dialogue is fun to listen to because it’s all so terribly written.  (All of the bad guys refer to the title character as being, “the female, Elektra!,” as if it was felt that there was some sort of danger of the audience forgetting who the star of the film was.)  It’s an enjoyably dumb movie, which makes it perfect for insomnia-fueled viewing. 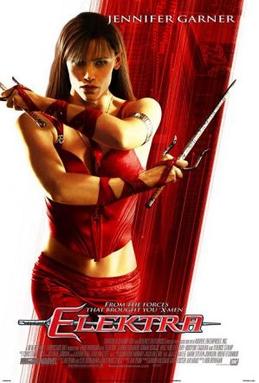