If, last night, you found yourself awake at three in the morning, you could have turned over to Starz and watched the 2015 film, Truth.

I can’t say for sure whether or not Truth would have put you to sleep.  It kept me awake, largely because I was in a state of shock that any movie could be as bad as what I was watching.  Without running the risk of hyperbole, I can say that Truth is one of the worst fucking movies that I’ve ever seen in my entire life.  It’s not just that the film is poorly scripted, inconsistently acted, and directed in the most heavy-handed way possible.  No, the problems with Truth went far beyond mere execution.  Truth is a film with an agenda, one that I kind of agree with, but it’s such a total misfire that it ends up doing more damage to its cause than good.  Truth is meant to be a defense of the much maligned mainstream media but it’s so poorly put together that it’s easy to imagine it being one of Donald Trump’s guilty pleasures.  Remember how all of us musical theater nerds used to hatewatch Smash?  I imagine that the White House staff does the same thing with Truth.

Truth is ostensibly based on a true story.  In 2004, veteran anchorman Dan Rather (played by Robert Redford) reported a story that then-President George W. Bush got preferential treatment while he was serving in the Air National Guard.  This story was considered to be especially big because 1) the Iraq War was deeply unpopular, 2) Bush was in a tight race for reelection, 3) his opponent, John F. Kerry, didn’t have much to offer beyond having served in Vietnam, and 4) questions were being raised about what Kerry actually did in Vietnam.

One of the most important pieces of evidence in Rather’s story were four memos that had been provided by a retired Lieutenant Colonel from the Air National Guard, a veteran Bush-hater named Bill Burkett (played, in the film, by Stacy Keach).  Shortly after the story aired, conservative bloggers claimed that the memos were obvious forgeries.  After spending weeks defending the story and haughtily dismissing anyone who didn’t collect an eight-figure paycheck from CBS, Rather admitted on air that the authenticity of the memos could not be verified.  In the wake of the scandal, Rather’s longtime producer, Mary Mapes (Cate Blanchett), was fired.  Rather retired a year earlier than expected and went on to become one of those reliably dull commentators who occasionally emerges to complain about how the world hasn’t been the same since Adlai Stevenson died.  Mapes later wrote a book, which argued that 1) the memos were authentic and 2) it didn’t actually matter whether they were authentic, even though they like so totally were.

With all the current talk about fake news and whether both the media and Hollywood exist in a bubble, Truth is a film that should be especially relevant but, as previously stated, it’s so clumsy and heavy-handed that it actually does more harm than good.  About halfway through the film, there’s a hilarious scene in which literally the entire country is shown watching 60 Minutes with awe-struck expression on their face.  Children are watching.  Customers in a bar are watching.  The cooking staff in the kitchen pauses in their work to watch the report.  Heroic music rises on the soundtrack.  This scene, with all of its self-important grandeur, pretty much sums up everything that’s wrong with Truth.  It’s one thing to argue that the news media does, should, and must play an important role in American life.  It’s another thing to make your argument by constructing a fantasy world where the entire country plots their lives around watching 60 Minutes.  But that’s the way Vanderbilt directs the entire film.  He’s so high on the fumes of his good intentions that he doesn’t realize his film basically comes across like a parody of those intentions.

Especially in the second half of the film, there’s a lot of speeches about why journalism is important.  And those speeches may actually make a great point but the problem is that none of them convince us that Mary Mapes and Dan Rather didn’t get fooled by some painfully obvious forgeries.  In its laudable effort to defend journalism, Truth makes the mistake of excusing shoddy journalism. When, towards the end of the film, Mapes exclaims that the memos were only a minor part of the overall story and not necessary to prove that Bush got preferential treatment, you want someone to ask her, “If you could prove the story without them, then why did you include these unverifiable documents in the first place, especially considering that they were received from a questionable source?”  But nobody does because none of the film’s saintly characters have been written or portrayed with the nuance necessary to be able to survive a question like that.   Truth‘s problem is that it wants to have it both ways.  “It doesn’t matter that this story was based on obviously fake documents,” Truth says, “And, because Mary Mapes and Dan Rather were sent by God to tell the truth, the obviously fake documents were completely real.”

And then there’s the film’s performers.  Stacy Keach is great as Burkitt and his eccentric performance suggests the film that Truth could have been if it wasn’t so concerned with trying to portray its lead characters as saints.  But then there’s Robert Redford, whose portrayal of Dan Rather has all the nuance and personality of a wax figure.  (Redford wears suspenders.  That’s the extent of his performance.)  As Mary Mapes, Cate Blanchett is totally wasted.  She doesn’t really have a character to play, beyond her male director’s conception of what a professional woman is supposed to be like.  (She also has a traumatic back story of abuse, which the film trots out in such a klutzy manner that it’s actually incredibly insulting to real-life abuse victims.)  Dennis Quaid, Topher Grace, and Elisabeth Moss all show up as members of Mapes’s team.  Quaid is playing a military man so he gets to salute in slow motion.  Grace is playing a hipster with a beard so he gets this embarrassing scene where he rants about how he’s being targeted not because of sloppy reporting but because of a corporate conspiracy.  (This was obviously meant to be a huge applause moment but, like a lot of the movie, it doesn’t explain how the progressive cause is helped by shoddy journalism.)  Moss doesn’t get to do anything, other than sit in the background.  To waste a cast of this quality is a crime.

So why did this mostly terrible film get respectful reviews?  Why did Sasha Stone and Jeff Wells insist that Truth was destined to be an Oscar contender?  Call it confirmation bias.  Truth plays to mainstream liberals (which includes the majority of film reviewers) in much the same way that God’s Not Dead 2 plays to Christians.  But just because you agree with a film’s ideology, that doesn’t make it an example of good filmmaking.  While artistic films are often political, it’s rare that political films are ever art.  If every anti-Bush film was an artistic masterpiece, we would be living in a cinematic golden age.

Here’s the thing.  We live in a time when the media is under attack and being used a convenient scapegoat for every bad thing in America. Donald Trump largely won in 2016 by portraying the media as being biased and that’s a charge that will undoubtedly be repeated many times over the next four years.  A heavy-handed mess like Truth doesn’t help anything. 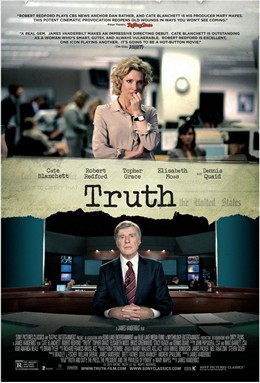