If you were having trouble getting to sleep around two in the morning last night, you could have turned over to Starz and watched the 2016 film, The Comedian.

It probably wouldn’t have helped.  It’s not that The Comedian is a particularly interesting movie or anything like that.  Abysmally paced and full of dull dialogue, The Comedian would be the perfect cure for insomnia if it just wasn’t so damn loud.  Robert De Niro plays an aging comedian named Jackie Burke and, in this movie, being an aging comedian means that you shout out your punch lines with such force that you almost seem to be threatening anyone who doesn’t laugh.  However, the threats aren’t necessary because everyone laughs at everything Jackie says.

Actually, it’s a bit of an understatement to say that everyone laughs.  In The Comedian, Jackie is such a force of pure, unstoppable hilarity that all he has to do is tell someone that they’re fat and literally the entire world will shriek with unbridled joy.  The thing with laughter is that, in the real world, everyone laughs in a different way.  Not everyone reacts to a funny joke with an explosive guffaw.  Some people chuckle.  Some people merely smile.  But, in the world of The Comedian, everyone not only laughs the same way but they also all laugh at the same time.  There’s never anyone who doesn’t immediately get the joke and, by that same token, there’s never anyone who can’t stop laughing once everyone else has fallen silent.  The Comedian takes individuality out of laughter, which is a shame because the ability to laugh is one of the unique things that makes us human.

Anyway, The Comedian is about a formerly famous comedian who is now obscure.  He used to have a hit TV show but now he’s nearly forgotten.  Why he’s forgotten is never made clear because nearly everyone in the movie still seems to think that he’s the funniest guy in the world.  Jackie’s an insult comic and people love it when he tells them that they’re overweight or when he makes fun of their sexual preferences.  This would probably be more believable if Jackie was played by an actor who was a bit less intense than Robert De Niro.  When De Niro starts to make aggressive jokes, you’re natural instinct is not so much to laugh as it is to run before he starts bashing in someone’s head with a lead pipe.

Anyway, the plot of the film is that Jackie gets into a fight with a heckler.  The video of the fight is uploaded to YouTube, which leads to a scene where his manager (Edie Falco) stares at her laptop and announces, “It’s going viral!”  Later on, in the movie, Jackie forces a bunch of old people to sing an obnoxious song with him and he goes viral a second time.  I kept waiting for a shot of a computer screen with “VIRAL” blinking on-and-off but sadly, the movie never provided this much-needed insert.

In between beating up the heckler, ruining his niece’s wedding, and hijacking a retirement home, Jackie finds the time to fall in love with Harmony Schlitz (Leslie Mann), a character whose name alone is enough to The Comedian one of the most annoying films of all time.  Harmony’s father is a retired gangster (Harvey Keitel) and you can’t help but wish that Keitel and De Niro could have switched roles.  It wouldn’t have made the movie any better but at least there would have been a chance of Keitel going batshit insane whenever he took the stage to deliver jokes.

I’m not sure why anyone thought it would be a good idea to cast an actor like Robert De Niro as a successful comedian.  It’s true that De Niro was brilliant playing a comedian in The King of Comedy but Rupert Pupkin was supposed to be awkward, off-putting, and not very funny.  I’m not an expert on insult comics but, from what I’ve seen, it appears that the successful ones largely succeed by suggesting that they’re just having fun with the insults, that no one should take it personally, and that they appreciate any member of the audience who is willing to be a good sport.  Jackie just comes across like a cranky old misogynist.  Watching Jackie is like listening to your bitter uncle play Vegas.  I guess it would help if Jackie actually said something funny every once in a while.  A typical Jackie joke is to refer to his lesbian niece as being a “prince.”  Speaking for myself, when it comes to Robert De Niro being funny, I continue to prefer the scene in Casino where he hosts the Ace Rothstein Show.

Though it may have failed at the box office, The Comedian seems to show up on Starz quite frequently.  They always seem to air it very late at night, as if they’re hoping people won’t notice. 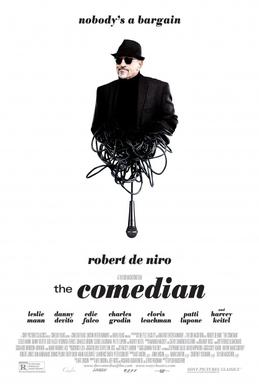 22 responses to “Insomnia File #33: The Comedian (dir by Taylor Hackford)”