If you were suffering insomnia at around 2:30 this morning, you could have turned over to ActionMax and watched the 2005 film Born Killers.

In other words, Morgan J. Freeman has been involved with a lot of crap.

However, Born Killers is actually a fairly good film.  It’s certainly far better than anything you would expect to see from the director of American Psycho II.

Born Killers tells the story of two brothers, John (Jake Muxworthy) and Michael (Gabriel Mann).  John and Michael are both killers.  They call other human beings “piggy banks” and they spend all of their time murdering innocent people and then robbing them.  For the wild and unpredictable Michael, it’s fun.  For the coolly calculating John, it’s strictly business.  They’re both sociopaths but, as quickly becomes apparent, Michael is the only one who is having any fun.

Through flashbacks, we discover that Michael and John never really had a chance to be anything other than what they eventually became.  From an early age, their father (Tom Sizemore, who is absolutely chilling) taught them how to kill and steal.  After their father’s violent death, John and Michael go on their own killing spree.

And everything seems to be going well for them, until John ends up shooting Michael.  Why did John kill him?  Even though John is narrating the story, he doesn’t seem to be sure.  He admits that his memory may be fooling him.  He thinks that it might have something to do with a woman named Archer (Kelli Garner), who the brothers reluctantly murdered.

With his brother now dead, John tracks down his half-sister, Gertle (Lauren German).  John hasn’t seen Gertle in years and, when he first approaches her, he pretends to be a Mormon missionary.  Gertle responds by leading him into her house and, after they have sex, she tells him that she knows that he is her half-brother.

Though John was originally planning on murdering her, he instead finds himself falling in love with her and even feeling that maybe his love for her would redeem him for all of his past crimes.  When she tries to warn him that she has issues of her own, John replies that he knows they are meant to be together.  He begs her to take a chance on him.

But Gertle, as you’ve probably guessed, has secrets of her own…

At first, I wasn’t expecting much from Born Killers.  And, for the first 30 minutes or so, it plays out like your typical serial killer road film.  I kept watching because of the performances but I didn’t think much of the story.  However, as soon as John tracks down his sister, the entire movie changes direction and it actually starts to catch you off guard.  Suddenly, you’re no longer sure just what exactly is going to happen or how it’s going to end.  During the final half of the film, Lauren German and Jake Muxworthy give such good and compelling performances that you forget about the shaky first half.  Even if the film’s ending is a little bit too twisted for its own good, it’s still an interesting journey.

All in all, Born Killers is not at all bad for a low-budget serial killer film airing on Cinemax at two in the morning! 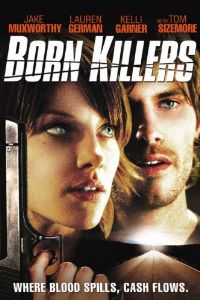