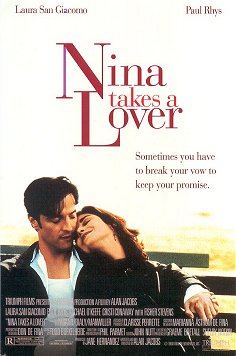 Last night, if you were having trouble getting to sleep at 2 in the morning, you could have turned over to Starz and watched Nina Takes A Lover, a movie from 1994.

Nina Takes A Lover is such a typical 90s Sundance film that it could have just as easily been called Independent Movie From 1994.  Everything that we tend to associate with American independent cinema is present in this film.  It’s a relationship drama with moments of quirky comedy.  It’s set in the city and no, it doesn’t matter which city.  It could be New York or it could be Seattle or it could be Los Angeles or San Francisco.  The important thing is that it’s a city on one of the coasts, the type of city where people engage in witty banter while sharing an apple in the park or over cups of coffee at a cozy cafe that was probably replaced by a Starbucks after this film was released.  This is the type of film where the characters tell their stories in flashback while being interviewed by a bespectacled journalist.  Characters alternate between artificial small talk and sudden statements of portentous wisdom.  Of course, all of quirky drama leads up to a sudden twist.  I figured out the twist after watching about 10 minutes of the film.  Maybe audiences in 1994 were a bit more surprised.

About the only thing that keeps Nina Takes A Lover from being the most stereotypical indie film ever made is the fact that there’s no quirky criminals and nobody spends any time talking about their favorite childhood TV shows.  If Nina had only shot someone while taking a lover, this would have been the most indie film ever.

I imagine that I’ve probably made the film sound totally unbearable but I actually enjoyed Nina Takes A Lover.  Once I realized and accepted that Nina Takes A Lover wasn’t exactly going to reinvent cinema, I discovered that it was actually a very likable film.

Nina is played by Laura San Giacomo, who owns a shoe store.  Nina meets a man in the park.  The man (Paul Rhys) has no name and is merely identified as being “Photographer.” (And, of course, he’s British because this is an independent film and, in the world of indie cinema, all ideal lovers are British.)  Soon, Nina and Photographer are having a passionate and very physical affair.  However, Nina explains that she’s married and her husband will be home in three weeks.  Photographer says that he has a wife as well.  As Nina and the Photographer talk about love, marriage, and sex, they also try to figure out what they should do when the three weeks are up.

Nina Takes A Lover is a good film to watch when you’ve got insomnia.  It won’t put you to sleep but it will definitely make the hours of darkness a little more pleasant.

42 responses to “Insomnia File No. 4: Nina Takes A Lover (dir by Alan Jacobs)”