Jack Falen (Dennis Hopper) sits on a bench, waiting for a train.  He’s wearing a military uniform.  He claims that he’s a 1st sergeant.  He claims that he’s just returned from Vietnam.  He’s traveling with a flag-draped coffin.  He says that the coffin contains the remains of his best friend from Nam.  Jack is accompanying the coffin back to his friend’s hometown.  Jack says that he’s going to make sure that his friend gets a proper burial.

From the minute we meet Jack, we get the feeling that there’s something off about him.  He’s a little bit too quick to smile and, when he laughs, it’s the guttural sound of someone who has learned how to show joy by watching other people but who has perhaps never felt it himself.  Sometimes, he’s quiet.  Sometimes, he is loquacious and verbose.  When he does speak, he rarely looks anyone in the eyes.  Jack is jumpy, as if he’s constantly afraid that he’s about to be exposed as a liar.

Soon, Jack is riding a train across the country.  While the rest of the passengers look out the windows and takes in the American landscape, Jack nervously wanders around the train.  He gets involved in a regular chess game.  He befriends a mysterious man named Mark (Dean Stockwell).  He starts a tentative relationship with a student named Stephanie (Taryn Power).  He tells anyone who will listen that he’s traveling with the body of his best friend.  When a black Korean war vet complains that Jack is acting like he’s the only person who lost a friend in a war, an offended Jack replies that his friend was black.

Jack sees things.  When he sees that the other passengers are assaulting Stepanie, he pulls out a small gun and aims it at the back of the train, just to suddenly realize that Stephanie is sitting unbothered at the back of the train.  While we know that Jack was hallucinating the attack on Stephanie, we still wonder if he really pulled out that gun.  If he did, no one else seems to have noticed.

Sometimes, the passengers say things to Jack that don’t seem to make any sense, leaving Jack staring at them in confusion.  Other times, Jack sees dark figures walking through the train.  At night, he wanders around naked.  Jack spends the trip watching the other passengers with a slightly dazed look on his face.  He plays chess with a man who later insists that he’s never played chess with Jack.  Sometimes, he thinks that he and Stephanie are outside of the train.  When Mark approaches Jack and asks for help, Jack explains that he can’t help anyone.  While a soundtrack of old World War II propaganda songs thunders in the background, Jack struggles to keep track of what’s real and what isn’t.

And so does the audience.  As we watch, it occurs to us that Jack’s stories about Vietnam don’t really seem to add up.  Add to that, we never actually saw Jack board the train.  Instead, we saw him sitting on a bench and waiting for the train.  We’re left to wonder if the train’s real or if the whole movie is just a figment of Jack’s damaged imagination.  And what about the coffin?  Tracks is full of unanswered questions but, in the film’s incendiary final moments, we do learn the truth about that coffin … maybe.

Henry Jaglom has been making independent films for several decades now.  Tracks is one of his better films, if just because Jaglom’s loose, seemingly improvised style actually works well at communicating Jack’s own struggle to keep up with what’s really happening and what he’s imagining.  As deceptively random as the film’s collections of scenes may appear, it’s all anchored by Dennis Hopper’s wonderfully unhinged performance.  Hopper brings a method actor’s intensity to Jack’s struggle to not only keep straight what’s real and what isn’t but also to keep his fellow passengers from understanding that he’s deeply unbalanced.  This film was made during Hopper’s drug-fueled lost years and he plays Jack like a man who is desperately trying to keep the world from seeing that he’s in the throes of withdrawal.  Unlike Hopper, Jack’s addiction isn’t to drugs.  Instead, Jack’s addicted to war, or at the very least his obsession with war.  (By the end of the movie, you have your doubts about whether Jack’s ever been to Vietnam or not.)  The use of World War II propaganda songs on the soundtrack may occasionally get annoying but they actually play up the contrast between our often simplistic view of war and the far more complex reality.

If nothing else, I would recommend Tracks for Hopper’s performance.  As well, since he co-stars with Dean Stockwell, it’s easy to imagine Tracks as being a bit of a prequel to Blue Velvet.  Who’s to say that Jack Falen didn’t change his name to Frank Booth?

And finally, here are the San Diego Film Critics Nominations!

(Insert your own clever and snarky analysis here because I’m exhausted.  Maybe point out that they nominated Alejandro Inarritu for best director and Michael Keaton, Edward Norton, and Emma Stone but they didn’t nominate Birdman for best film…)

Here are the nominations for the Gotham Independent Film Awards!  It’s debatable just how reliable the Gothams are as an Oscar precursor.  For one thing, the majority of the big studio productions are not eligible for the Gothams.  However, when you’re an indie film trying to win mainstream awards, any recognition is good recognition.

As far as the nominees go, Birdman and Boyhood are already Oscar front runners.  However, the Gotham nominations will perhaps remind some people that The Grand Budapest Hotel is eligible for Oscar consideration as well.

Here are the Gotham nominations! 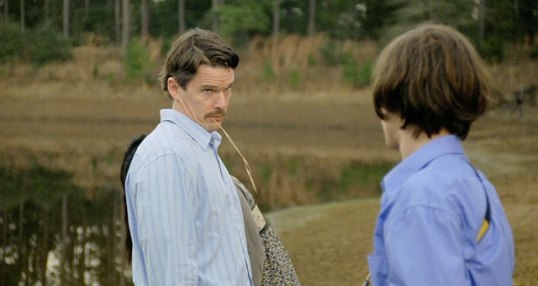