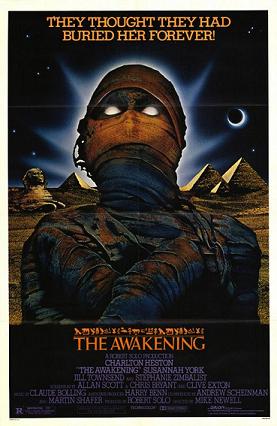 Charlton Heston is Matthew Cormbeck, a driven archaeologist.  (Could an archaeologist played by Charlton Heston by anything other than driven?)  In 1961, he discovers the long-lost tomb of an Egyptian queen named Kara.  Ignoring both the birth of his daughter and the warning inscribed over the doorway, Matthew enters the tomb and discovers the mummified Kara.  At the same time, his stillborn daughter, Margaret, comes back to life.

18 years later, Cormbeck is a teacher at a British university.  He has since divorced Margaret’s mother and has married his longtime assistant, Jane (Susannah York).  Matthew is still obsessed with whether or not the Egyptians are taking proper care of the mummy and wants to bring it to England.  At the same time, Margaret (Stephanie Zimbalist) defies her mother and comes to England to meet her father.

Like Blood From The Mummy’s Tomb, The Awakening was based on Bram Stoker’s The Jewel of Seven Stars.  Unfortunately, The Awakening is never as good as Blood from Mummy’s Tomb and gets bogged down in the lengthy Egyptian prologue.  (Blood from The Mummy’s Tomb skipped over the first part of Stoker’s novel and started with Margaret already 18 and possessed.)  The Awakening tries to take a more cerebral approach than the Hammer adaptation but both Heston and Zimbalist are fatally miscast.  Especially in the Egyptian scenes, Heston grits his teeth and lets his ascot do most of the work.