This trailer actually came out on Cinco De Mayo, so I’m a little bit late in sharing it.

Every few months, a new DCU trailer is released and everyone says that the DCU is finally going to be as good as the MCU.

Man of Steel was going to be an Oscar contender.

Batman v Superman was going to be the epic that made us reconsider everything we thought we knew about super hero films.

Suicide Squad was going to be the most fun that anyone had ever had at the movies.

Now, everyone’s saying that Wonder Woman is going to be the first good DCU movie.  Well, I certainly hope that’s the case.

The latest (and final) trailer seems to confirm that the best thing that Wonder Woman has going for it is Gal Gadot.  The trailer also has a self-aware feel to it that I hope will be present in the actual film.  After three films that took themselves way too seriously, the DCU needs to have a little fun.

In June, a TV show based on Stephen King’s The Mist will air on Spike TV.  I’m not particularly enthusiastic about it but I know some people are.

And, in all honestly, the latest teaser does look effective.  I’ve read a few comments online that have described this teaser as being gory but, to be honest, it’s no more extreme than the typical episode of The Walking Dead.  I mean, yeah, there’s some blood and there’s some dead people but … bleh.  How is that shocking?  That said, this teaser does create and maintain a properly ominous atmosphere.  I’ll give the show a chance when it airs.

At first, I was enthusiastic about Blade Runner 2049.

Then, for reasons that I’m still not quite sure that I understand, I became rather less enthusiastic.  I thought about all the disappointing sequels and reboots that I’ve seen and, for whatever reason, I failed to take into account all of the recent sequels — Star Wars: The Force Awakens, Logan, Guardians of the Galaxy Volume 2 –– that I’ve seen that actually did work.  I thought about how tremendous hype often leads to disturbing results.  I considered that, after a countless number of brilliant films, Denis Villeneuve is due for disappointment.  These were my concerns and I started to lower my expectations.

But then, earlier today, I saw the trailer and it looks totally badass!

Seriously, I love that trailer.

And here it is! 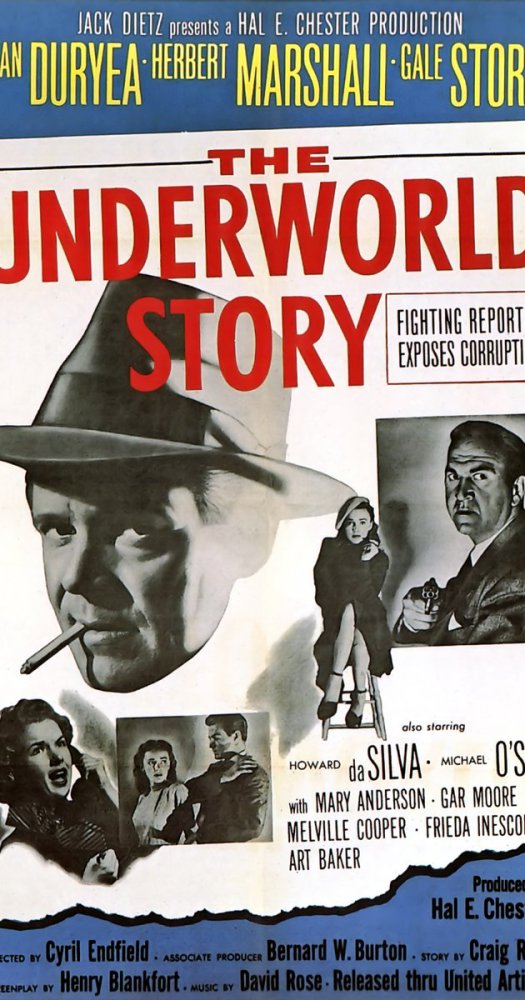 Hollywood’s favorite heel Dan Duryea got a rare starring role in THE UNDERWORLD STORY, a 1950 crime drama in which he plays… you guessed it, a heel! But this heel redeems himself at the film’s conclusion, and Duryea even wins the girl. Since that girl is played by my not-so-secret crush Gale Storm , you just know I had to watch this one!

The part of muckraking tabloid journalist Mike Reese is tailor-made for Duryea’s sleazy charms. He’s a big-city reporter who breaks a story about gangster Turk Meyers spilling to the D.A., resulting in the thug ending up murdered on the courthouse steps in a hail of bullets. DA Ralph Monroe (Michael O’Shea )  puts the pressure on Mike’s editor, and Reese becomes persona non grata in the newspaper game. Seeing an ad for a partner at a small town newspaper, Mike gets a $5,000 “loan” from crime boss Carl…

Everyone knows who Al Capone was but few people remember Frank Nitti.  Nicknamed “The Enforcer,” Nitti was Capone’s right-hand man.  When Big Al was sent to federal prison for not paying his taxes, Nitti was the one who kept things going in Chicago.  While Al was losing his mind in Florida, Nitti was the one who moved the Chicago Outfit away from prostitution and into the labor racket.  Today, if anyone remembers Frank Nitti, it is probably because of the scene in Brian DePalma’s The Untouchables where Eliot Ness tosses him off of a building.  In real life, Nitti survived the Untouchable era just to become one of the few crime bosses to die by his own hand.  In 1943, With the feds closing in on him, Nitti shot himself in a Chicago rail yard.

Frank Nitti: The Enforcer was a made-for-TV movie that told the story of Nitti’s life.  Broadcast a year after The Untouchables, Nitti is, in many ways, a direct refutation of DePalma’s film.  Eliot Ness never appears in the movie and is dismissed, by special prosecutor Hugh Kelly (Michael Moriarty), as being a publicity seeker.  Al Capone (Vincent Guastaferro) is ruthless and resents being called Scarface but he never hits anyone with a baseball bat.  In this movie, the only real villains are the Irish cops who harass Nitti (played by Anthony LaPaglia, in his American film debut) and Chicago’s ambitious mayor, Anton Cermak (Bruce Kirby).  Cermak orders a corrupt cop (Mike Starr) to shoot Nitti and the film implies that Cermak’s subsequent assassination was payback.

Though it sometimes tries too hard to portray its title character as just being a salt of the Earth family man who also happened to be the biggest mob boss in the country, Nitti is a good gangster film.  Michael Moriarty’s performance is a forerunner to his work on Law & Order and Trini Alvarado is lovely as Nitti’s wife.  Anthony LaPaglia gives a good performance in the lead role, with the film’s portrayal of Nitti as a ruthless but reluctant mob boss predating The Sopranos by a decade.

Born in Cardiff, Peter Stevens was the son of two artists.  (His father, Lawrence Sterne Stevens, was a prominent pulp artist at the same time as his son.)  Peter Stevens studied at London’s Royal Academy of Art and, with his wife, moved to New York in 1940.  It was while serving in the Army during World War II that Peter sold his first pulp illustrations to Argosy.  From 1943 to 1963 (when his shifted his focus to doing commissioned portraits), Stevens did covers for almost every prominent pulp magazine.

A few of those covers can be found below: 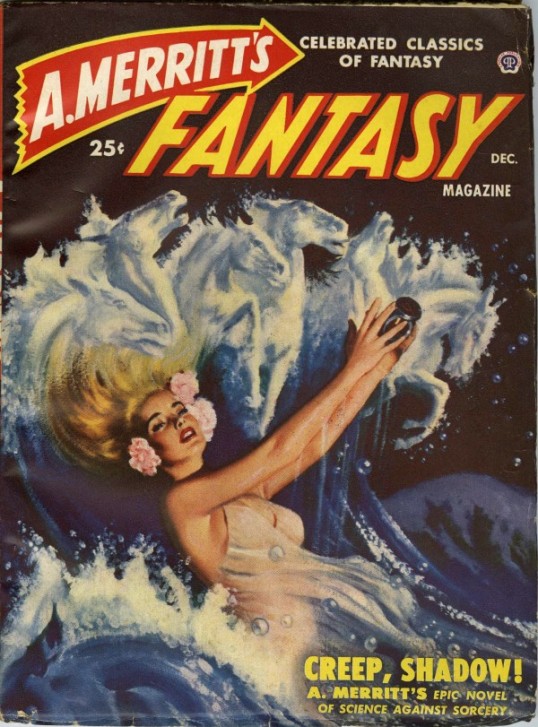 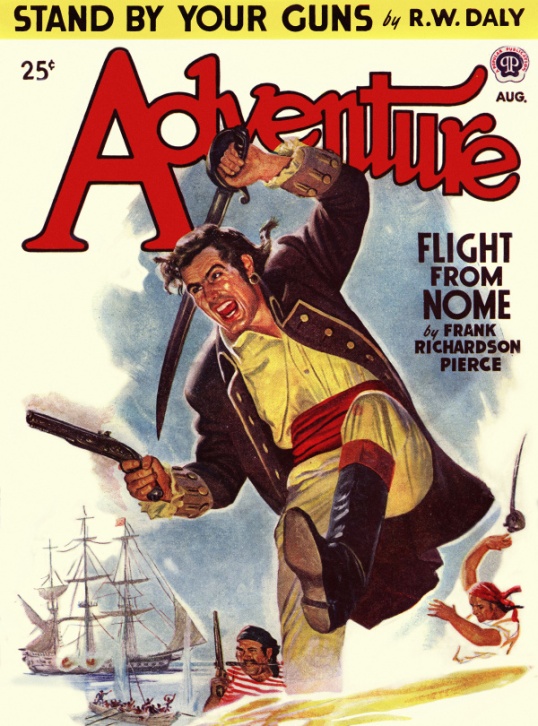 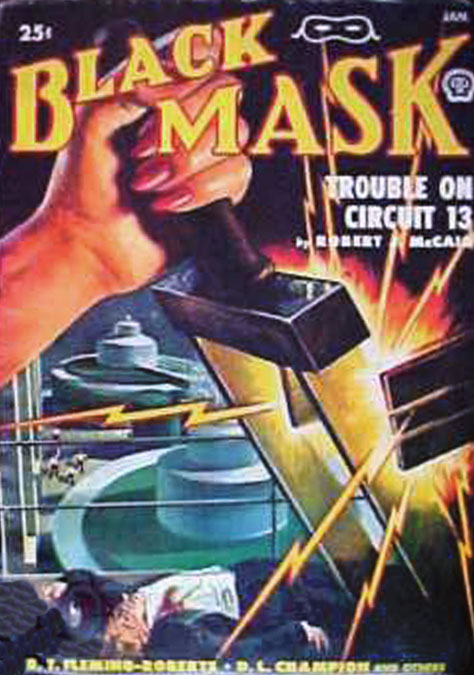