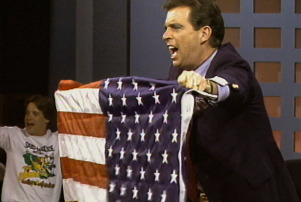 At least, that is the claim made by Evocateur, a documentary about both the show and the controversial showman who hosted it.  Since I was too young to watch the show when it originally aired, it was interesting, for me, to watch the many clips that were featured in this documentary.  Downey would chain-smoke and shout, while kicking people off his stage.  At one point, Downey literally wrapped himself in an American flag and ordered a guest to kiss his ass.  On another show, Downey provoked then-Libertarian presidential candidate Ron Paul into shouting at him to shut up.  One of the high points of the documentary comes when guest Roy Innis loses his temper and sends Al Shaprton falling to the floor.  The audience would into it, chanting “Mort!  Mort!  Mort!” in the same way that the audience of The Jerry Spring Show chant “Jerry!” whenever a fight breaks out or a guest takes a spin on a the stripper pole.  As way of comparison, a clip of Phil Donahue respectfully interviewing a professional foot model (and promising to let his audience know if maybe they could become a foot model too) is used to illustrate just how different The Morton Downey, Jr. Show was from everything else on the air at the time.  It is a stretch to try to connect (as this film attempts to do) The Morton Downey, Jr. Show to the rise of the Tea Party but it is true that both Donald Trump and Morton Downey, Jr. borrowed a page from the same populist playbook.

Through home video footage and candid interviews, the documentary attempts to show how Morton Downey, Jr. went from being the son of a famous Irish crooner and a friend of Ted Kennedy’s to being the forerunner of trash tv.  There is a lot of speculation about what motivated Downey, some parts of which are more credible than others.  A lot of attention is given to Downey’s relationship with his father and his early attempts to have a musical career of his own. As a singer, Mort was always overshadowed but, as a political provocateur and, later, as an anti-smoking activist, Mort was able to establish an identity of his own.  Along with archival footage and talking head clips, Evocateur uses animation to tell a good deal of the story.  It’s distracting but that currently seems to be the trendy thing to do when it comes to documentaries.

Despite its flaws, Evocateur is an interesting profile of a man whose influence is still being felt even if he has largely been forgotten.

Well, I can finally cross HERCULES IN NEW YORK off my bucket list. This fantasy-comedy starred the team of bespectacled, scrawny comic actor Arnold Stang and musclebound ‘Mr. Universe’ Arnold Strong. Who? Why, none other than the Governator himself, Arnold Schwarzenegger, making his film debut as the Greek Demi-God paying a visit to modern-day Earth. Hercules is all-powerful, and can only be defeated by one thing… a lousy script! 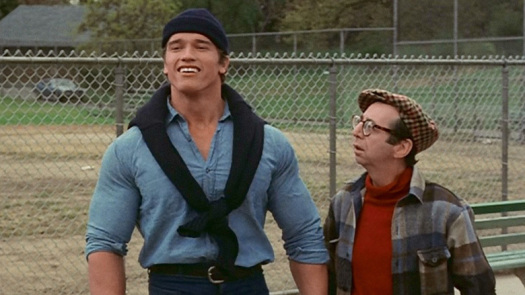 The plot, if you can call it that, has half-human Herc pining to go to Earth against father Zeus’s wishes. Zeus finally relents and transports the headstrong Herc to Terra Firma, where he befriends Stang playing Pretzie, so named because he sells pretzels. Brilliant! The two then have a series of adventures. Herc battles an anemic looking grizzly bear in Central Park! Herc becomes a pro wrestler! Herc falls in love with a mortal! Meanwhile, on Mount Olympus, Juno conspires with Pluto to get rid…

Back in January and February, I was looking forward to seeing The Big Sick.  Then I spent March and April listening to people insist that 1) The Big Sick is the greatest comedy ever and 2) if you don’t see and love The Big Sick, then you’ll somehow be responsible for the end of the world.  Nothing turns me off quicker than excessive and oppressive hype.

That said, I still hope the movie’s good because I will definitely be seeing it.

The time has come.

I assume that, while the Avengers are defeating big-budget threats, The Defenders will keep peace on Earth by fighting Sigourney Weaver and ninjas in hallways.

Oh, and Elektra’s back…


Today, Columbia finally released the first trailer for their adaptation of Stephen King’s The Dark Tower!

I love the idea of Idris Elba and Matthew McConaughey playing rivals but, in all honesty, this trailer … well, I don’t know how I feel about this trailer.  Watching it, I found myself flashing back to watching both Tomorrowland and Prisoners of the Lost Universe.   (No, that’s not a good thing.) Columbia is advertising this with “In a world of superheroes, there is only one gunslinger” but, to be honest, this could just as easily be a trailer for the latest entry in either the MCU or the Superman Kills People saga.

That said, trailers are often the worst way to guess what a movie is going to be like and I still hope The Dark Tower is good!

(By the way, the comments section underneath the trailer on YouTube is really annoying.  Yes, Roland’s black.  Yes, the Man in Black is white.  Get over it.)