That was largely my reaction to watching the 1998 film, Permanent Midnight.  In this film, Ben Stiller plays Jerry Stahl, a real-life screenwriter who had a fairly successful career going in the 80s and early 90s.  He came out to Los Angeles looking to be a serious writer but, instead, he ended up writing for silly puppet show and getting addicted to heroin.  He also married a British television executive named Sandra (Elizabeth Hurley), so that Sandra could get her green card.  When the star of a show that he writes for tells him to kick his habit or lose his job, Jerry ends up smoking crack cocaine with a new dealer (Peter Greene).  When Sandra tells him that she’s pregnant, Jerry responds by shooting up in the bedroom.  When he’s trusted to spend the day taking care of his baby daughter, he drives her around the seediest sections of Los Angeles while he searches for his drug dealer.  As the baby cries beside him, Jerry shoots heroin into his jugular.  Jerry ends up unemployable and abandoned by every friend that he had.  He works at a fast food restaurant, or at least he does until he meets another recovering addict (Maria Bello).  She’s the one to whom he tells his story, in between sex and bouts of impotence.  In the end, what’s left for Jerry Stahl to do but write a book and then a movie about his life as a junkie?

It’s a harrowing story and I guess Stahl deserves some credit for writing the screenplay for a movie that doesn’t exactly make him look good.  However, Permanent Midnight runs into the same problem that afflicts most movies about drug addiction.  With very few exceptions, drug addicts are just not that interesting.  The only thing more boring than watching someone shoot up is then having to listen to that person explain why he shoots up.  (Trainspotting is the obvious exception but Trainspotting benefits from Danny Boyle’s frenetic direction, Ewan McGregor’s explosively charismatic lead performance, a witty script, and a killer soundtrack.  These are things that Permanent Midnight lacks.)  The film attempts to build up some sympathy for Stahl by telling us about his difficult childhood, his father’s suicide, and his mother’s instability but, in the end, Jerry is a junkie who shoots up in front of his baby.  Regardless of how crappy his childhood was, it’s hard to care about whether or not he ever gets his shit together.  Mostly, you just want someone to step in and make sure he never gets near that baby again.

Permanent Midnight makes another mistake, one that is all too common when it comes to films about troubled artists.  It continually tells us that Jerry is a talented and important writer without ever showing us any evidence of that fact.  We’re supposed to feel bad that Jerry is stuck working on a sitcom called Mr. Chompers but, at no point, does the film really convince us that he deserves anything better.  Everyone says that Jerry is talented but we don’t really get to see any evidence of that fact.  It’s hard not to feel that maybe Jerry should just be happy that, unlike the majority of writers in Los Angeles, he actually has a steady job.

(Jerry does get one good line, when he appears on The Maury Povich Show to promote his book and says, “People always ask, ‘What’s the worst thing heroin drove you to do?’  I always answer, ‘showing up on Maury.'”)

Of course, for most people, the main appeal of seeing Permanent Midnight will be the chance to see Ben Stiller shooting up heroin while soaked in withdrawal sweat.  Stiller gives a serious performance, good enough that you regret that his acting career now seems to mostly consist of starring in bad movies and making cameos in even worse ones.  There’s actually a lot of familiar faces in Permanent Midnight: Elizabeth Hurley, Maria Bello, Fred Willard, Owen Wilson, Sandra Oh, Janeane Garofalo, Andy Dick, and others.  They all give good enough performance but ultimately, this is aimless and ultimately rather frustrating movie. 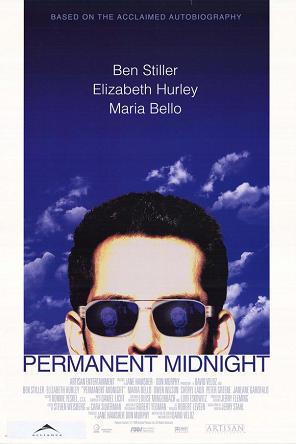 Tim Richmond was not the typical NASCAR driver.  In a sport that was largely dominated by blue-collar “good ol’ boys,” Richmond was from a wealthy Ohio family and considered himself to be a “cosmopolitan.”  Unlike many of the drivers, he was not a car expert but he still instinctively knew how to handle a 200 mph turn.  A charismatic showman, Richmond spent a few years as one of the sport’s rock stars.  Along with co-starring with Burt Reynolds in Stroker Ace, Richmond was also the basis for the character played by Tom Cruise in Days of Thunder.  Tragically, one the way to becoming the best, his career was sidelined by health problems, starting with a bout of double pneumonia.  When he was returned to the sport, he was sidelined again when a drug test came back positive and rumors of his hard-partying lifestyle made it difficult for him to find a sponsor.  Even as he fought to get the drug test overturned, he was hiding a bigger secret.  At a time when the merest rumor of having the disease could ruin someone’s life, Tim Richmond was battling AIDS.

Fans of NASCAR might enjoy this documentary, which was produced as a part of ESPN’s 30 For 30.  It is mostly made up of talking head interviews and archival footage of Richmond both racing and being interviewed.  I had never heard of Richmond before I watched this documentary but his charisma is obvious in the clips shown of him and those interviewed speak of him with enough awe that it is easy to believe that, had he not died, Richmond would have become one of the greatest racers of all time.  Mostly, this documentary serves as a reminder of the fear and paranoia of the early days of the AIDS epidemic.  Long before Magic Johnson famously announced that he was HIV positive, Richmond died isolated and fearful that the world would learn the cause of his condition.  This documentary serves as a reminder of who Tim Richmond was and who he could have been.

Battle of the Sexes, which people like me have been touting as a probable Oscar contender since January, finally has a trailer!

The trailer looks pretty good but I regret that they left out the scene of Emma Stone asking Steve Carell why he said Martha.

Ever since the end of the Twilight series, Robert Pattinson has been picking unexpected and edgy projects.  And, while there is occasionally a hint of desperation to Pattinson’s picks (“I am not Edward, goddammit!” seems to be the common subtext), it’s also led to him appearing in some genuinely interesting films and proving that, if nothing else, he’s a far better actor than Zac Efron.

(For the record, I still say that Pattinson was brilliantly cast in Cronenberg’s Cosmopolis.)

Here’s the trailer for Pattinson’s latest, Good Time.  This film, which takes place over the course of one night, features Pattinson as a career criminal who is desperately trying to put together enough money to get his brother out of prison.  Judging from the trailer, this is either going to be really good or a complete mess.

Watch below and judge for yourself!


This video was directed by Ace Norton, who was several videos to his credit.  Watching this video, I was immediately reminded of the work of Ben Wheatley, though the video predates all of Wheatley’s features films, with the exception of Down Terrace.  The guns firing at the balloons brought to mind Free Fire.  The image of a man tied to a line reminded me of A Field in England.  And the video’s dystopian tone felt almost identical to the dystopian tone of High-Rise.

I’ve shown this video to a few people and most of them have replied with, “What the fug did I just watch?”

Well, it doesn’t matter to me whether anyone else agrees or not.  I like this video, specifically because it is so bizarre.  Why should music videos make sense?  This is a video (and a song) that creates a definite mood.  It plays out like a dystopian nightmare and really, when was the last time that a dystopia ever made any sense?  If the world followed any sort of logic, it wouldn’t currently be on the brink of destruction.