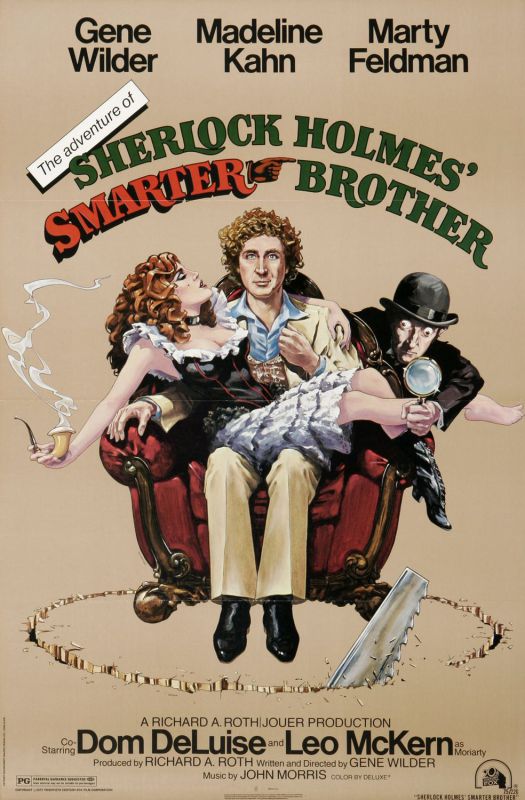 The late Gene Wilder was well loved by filmgoers for his work with Mel Brooks, his movies alongside Richard Pryor, and his iconic role as Willie Wonka. Wilder had co-written the screenplay for Brooks’ YOUNG FRANKENSTEIN, and now branched out on his own as writer/director/star of 1975’s THE ADVENTURE OF SHERLOCK HOLMES’ SMARTER BROTHER.

The zany tale, set in 1891, finds Sherlock’s jealous brother Sigerson (Wilder, who derisively calls his more famous sibling “Sheer-Luck”) assigned to the case of music hall singer Jenny Hill (Madeline Kahn) who’s being blackmailed by opera singer Eduardo Gambetti (the enormously funny Dom DeLuise ). Assisting Sigerson is his own Watson, the pop-eyed Sgt. Orville Stacker (Marty Feldman), blessed with “a photographic sense of hearing” that he can only access by whacking himself upside the head. The plot thickens as Sigerson learns Jenny’s a practiced liar (who only trusts men when she’s sexually aroused), she’s…

No, this latest movie a day is not about Lisa and Erin’s cat.

Instead, Doc is yet another retelling of the famous gunfight at the O.K. Corral.  Most cinematic depictions of that event present Wyatt Earp as being an upright hero, Doc Holliday as being his roguish friend, and the Clantons as being black hat-wearing villains.  Doc takes the opposite approach.  In this one, Wyatt (Harris Yulin) and his brother are sociopaths whose feud with the Clantons comes down to Ike Clanton’s (Mike Whitney) refusal to bow to their authority.  Wyatt is a coward and a physical weakling, who gets beaten up by Ike and is only saved when his friend, Doc Holliday (Stacy Keach), steps forward to protect him.

In this film, Doc is clearly dying from the minute he first appears.  Not only is Doc so thin that his bride actually carries him over the threshold, he is also constantly coughing.  His misery is only relieved by opium, herbs, and the love of Katie Elder (Faye Dunaway), the prostitute that he wins in a poker game at the start of the film.  Doc would rather just spend his remaining days with Katie but, because of his friendship with Wyatt, he is dragged into the Earp/Clanton fight.

Like most revisionist westerns of the early 1970s, Doc is a heavy-handed metaphor for the Vietnam War, with Wyatt Earp serving as an LBJ/Nixon stand-in and Doc Holliday standing in for all the leaders who enabled them.  It sounds interesting and Stacy Keach gives a good performance but Doc is glacially paced and Harris Yulin is thoroughly miscast as Wyatt.  It takes forever to get to the gunfight and the Doc is so determined to be revisionist that it forgets to be interesting.  Doc is an unfortunate misfire.


Today’s music video of the day is Drugs by Ratatat.

Some of my friends have told me that they actually found this video to be the creepiest thing that they had ever seen and that they would never forgive me for making them watch it.  Myself, I think it’s only as creepy as you choose to make it.

Visually, this video is entirely made up of Getty stock footage.  None of the images are actually connected, beyond the fact that they were all designed so that they could basically mean just about anything.  As viewers our natural instinct is to try to force everything we see and experience into a coherent storyline.  That’s an instinct that this video exploits to perfection.  In short, this video means whatever you think it means.  And what you think it means says more about you than the video.