And if you don’t believe it is a real movie: Here is the poster to prove it. 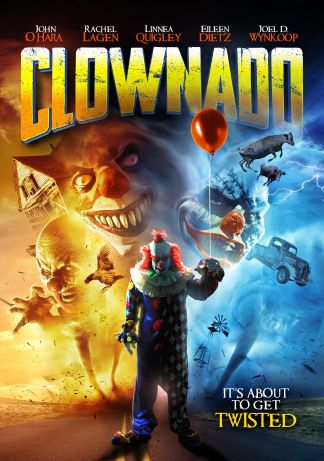 WARNING: This movie contains extreme language, nudity, strong sexual content, and very intense scenes of gore. Not at all recommended for people who are sensitive to that!

Cursed demonic circus clowns set out on a vengeful massacre using tornadoes. A stripper, Elvis impersonator, truck driver, teen runaway, and a dude get caught in the supernatural battle between femme fatal and the boss clown from hell.

Seriously, as some one who suffers from coulrophobia, I could not help but laugh at this movie. The plot is so ridiculous. The acting is beyond bad. The clowns are no more than juggalo wannabes in bad makeup. The writing seemed like it was made up on the spot by a really bad improve troop. The special effects were neither special nor effective. It, however, could have been a quality horror movie if they had spent a bit more money on the movie than they did on the opening credits.

I guess, as the press release says, “The Joke’s on you when Clownado blows in” and I did spend 1 hour and 34 minutes of my life watching this movie.

When can you see Clownado?

Wild Eye Releasing along with Extreme Entertainment will let the clowns blow thru your VOD September 3rd and touch down on your DVD’s September 17th!

Oh, you are still reading this preview / review and want to see the trailer for Clownado? Ok, but don’t say I didn’t send you a Clownado warning!