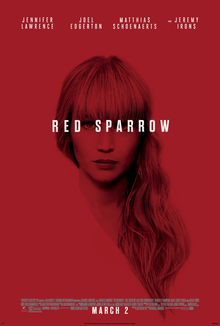 God, this film was a mess.

Red Sparrow is a spy thriller that features a lot of spies but not many thrills.  Jennifer Lawrence plays Dominika Ergova, a Russian ballerina whose career with the Bolshoi is ended when another dancer drops her on stage.  Fortunately, Dominka’s sleazy uncle Ivan (Matthias Schoenaerts) has a new career in mind!  Maybe Dominka could be a sparrow, a spy who seduces the enemy!  Just in case Dominka doesn’t want to spend the rest of her life seducing westerners, Ivan arranges for her to witness a murder and then informs her that she’ll be eliminated as a witness unless she does what he tells her.  This, of course, leads to Dominkia attending State School 4, where she is schooled in the arts of seduction by Matron (Charlotte Rampling).  Upon graduation, Dominka is sent to Budapest, where she falls in love with a CIA agent named Nash (Joel Edgerton) and a lot of predictable spy stuff happens.  Despite all of the sex and violence, it’s just not much fun.

Red Sparrow has all the ingredients to be an enjoyably trashy 90-minute spy flick but instead, it’s a slowly paced, 140-minute slog that just seems to go on forever.  Throughout the film, director Francis Lawrence (no relation to the film’s star) struggles to maintain a steady pace.  Too much time is spent on Dominka’s life before she suffers the injury that should have opened the film.  Meanwhile, the only interesting part of the film — Dominka’s education at State School 4 — goes by far too quickly and, despite the fact that she was giving one of the few interesting performances in Red Sparrow, Charlotte Rampling vanishes from the film early on.  Once Dominkia gets to Budapest, the film really slow down to a crawl.  Joel Edgerton’s a good actor and an even better director but he gives an overly grim and serious performance in Red Sparrow and he and Jennifer Lawrence have next to no romantic chemistry.

(That lack of romantic chemistry petty much dooms the final forty minutes of the film.  It’s easy to imagine a much better version of Red Sparrow in which Bradley Cooper played the role of Nash.  True, that would have been like the 100th time that Cooper and Jennifer Lawrence starred opposite each other but why not?  It worked for William Powell and Myrna Loy.)

As for Jennifer Lawrence, her performance is okay.  It’s not one of her best and there’s a few moments where it seems as if she’s more concerned with maintaining her Russian accent than with what’s actually going on in the scene but, for the most part, it’s a good enough performance.  That said, you do have to wonder how long she can go without having another hit film.  Despite being heavily hyped, Passengers, Mother!, and Red Sparrow all underperformed at the box office.  (In defense of Mother!, it was never going to be a box office hit, regardless of who starred in it.)  As talented as she is, it’s sometimes hard not to feel that, as an actress, Jennifer Lawrence has lost some of the natural spark that took viewers by surprise in Winter’s Bone, launched a whole new genre of dystopian YA adaptations with The Hunger Games, and which previously elevated unlikely films like The House At The End Of The Street.  She was a far more interesting actress before she became J Law.

Here’s hoping that she finally gets another role worthy of her talent!