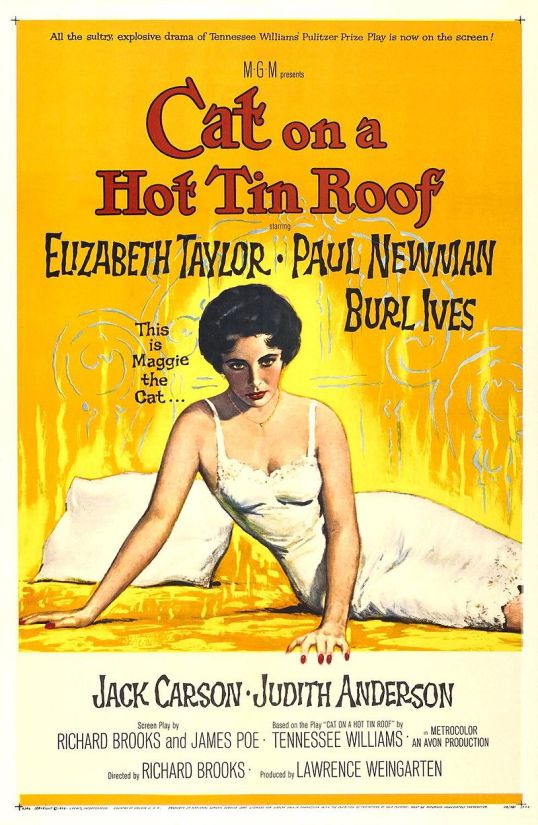 The 1958 best picture nominee, Cat On A Hot Tin Roof, opens with a 30-something Paul Newman doing something stupid.

It’s a testament to just how incredibly handsome Paul Newman was in the 1950s that he can still be sexy even while he’s stumbling around in a drunken haze and attempting to jump over hurdles on a high school football field.  Newman is playing Brick Pollitt, youngest son of the wealthy cotton farmer Big Daddy Pollitt (Burl Ives).  Brick was a star athlete in high school but now, he’s a drunk with an unhappy marriage and a lot of bitter feelings.  When Brick attempts to jump over the hurdles, he breaks his ankle.  The only thing that keeps Brick from being as big a loser as Biff Loman is the fact that he looks like Paul Newman.

Brick is married to Maggie (Elizabeth Taylor), a beautiful woman who may have grown up on the wrong side of the tracks but who has married into money.  The only problem is that it doesn’t seem like Brick is ever going to get that money.  With Big Daddy getting older, everyone in Mississippi is wondering which Pollitt son will inherit his fortune.  Will it be drunken, self-pitying Brick or will it be Goober (Jack Carson) and his wife (Madeleine Sherwood)?  One point in Goober’s favor is that he and his wife already have five rambunctious children while Brick and Maggie have none.  In fact, gossip has it that Brick and Maggie aren’t even sleeping in the same bed!  (While Maggie begs Brick to make love to her, Brick defiantly sleeps on the couch.)  The other problem is that, for whatever reason, Brick harbors unending resentment towards … well, everything.  Perhaps it has something to do with the mysterious death of Brick’s best friend and former teammate, Skipper…

Brick, Maggie, Goober, and the whole clan are in Mississippi to celebrate Big Daddy’s 65th birthday.  Big Daddy is happy because he’s just been told that, despite a recent scare, he does not have cancer.  What Big Daddy doesn’t know is that his doctor (Larry Gates) lied to him.  Big Daddy does have cancer.  In fact, Big Daddy only has a year to live.

Whenever I watch Cat On A Hot Tin Roof, I find it’s helpful to try to imagine what it would have been like to watch the movie in the 1950s.  Imagine how audiences, at a time when married couples were still regularly portrayed as sleeping in separate beds and when men were naturally assumed to be the kings of their household, reacted to seeing a film where Elizabeth Taylor was literally reduced to begging Paul Newman to make love to her while Newman hopped around on a crutch and continually found himself getting stuck in embarrassing situations.  Though it may seem tame by today’s standards, the film was undeniably daring for 1958 and watching it is like stepping into a time machine and discovering that, yes, there was a time when Elizabeth Taylor wearing a modest slip was considered to be the height of raciness.

Of course, the film itself is quite toned down from the Tennessee Williams’s play on which it was based.  Williams reportedly hated the changes that were made in the screenplay.  In the play, Skipper committed suicide after confessing that he had romantic feelings for Brick, feelings that Brick claims he did not reciprocate.  That was glossed voter in the film, as was the story of Skipper’s unsuccessful attempt to prove his heterosexuality by having sex with Maggie.  By removing any direct reference to the romantic undercurrent of Brick and Skipper’s relationship, the film also removes most of Brick’s motivation.  (It’s still there in the subtext, of course, but it’s probable that the hints that Newman and Taylor provided in their performances went straight over the heads of most audience members.)  In the play, Brick is tortured by self-doubt and questions about his own sexuality.  In the film, he just comes across as being rather petulant.

And again, it’s fortunate that, in the film, Brick was played by Paul Newman.  It doesn’t matter how bitter Brick becomes or how much he whines about not wanting to be around his family.  One look at Newman’s blue eyes and you understand why Maggie is willing to put up with him.  In the role of Maggie, Elizabeth Taylor gives a performance that manages to be both ferocious and delicate at the same time.  Maggie knows how to play the genteel games of the upper class South but she’s definitely not going to let anyone push her around.  It’s easy to see why Big Daddy prefers the company of Maggie to his own blood relations.  It’s not just that Maggie’s beautiful, though the implication that Big Daddy is attracted to her is certainly present in the film.  It’s also the she’s the only person around who is as strong and determined as him.

Indeed, seen today, Cat On A Hot Tin Roof‘s main strength is that it’s a masterclass in good acting.  Williams’s dialogue is so stylized and his plot is so melodramatic that one bad performance would have caused the entire film to implode.  Fortunately, Newman and Taylor make even the archest of lines sound totally natural while Burl Ives and Judith Anderson are both the epitome of flamboyant charisma as Big Daddy and Big Mama.  It takes a lot of personality to earn a nickname like Big Daddy but Ives pulls it off.

Along with being a huge box office success, Cat On A Hot Tin Roof was nominated for best picture of 1958.  However, it lost to Gigi.


This is an interesting video.

On the one hand, it leaves me wishing that I was on a beach somewhere, preferably Hawaii but I’d even settle for Daytona.  Maybe not Atlantic City, though.  That’s way too far up north.  And don’t even get me started on the beaches in Maine.

On the other hand, it also leaves me worried that something really, really bad is about to happen.  It’s a video that manages to be both positive and ominous at the same time.