It’s time to finish off my triptych of Scenes I Love from 2004’s film adaptation of The Phantom of the Opera. The first two parts were my favorite solo and chorus scenes from film and now we finish it off with what has to be the top scene (IMO) from the film.

The characters of The Phantom and Christine have always been the focal point of the film. Even with the arrival of the wholesome and (as Lisa Marie would call him) vanilla Raoul, Vicomte de Chagny, the film continues to truly sizzle when it’s all about The Phantom and Christine moving their relationship from ingenue and mentor to unrequited lovers.

It’s the latter which this scene looks to portray through a duet written by The Phantom himself and where he swaps himself into the role of Don Juan. This duet has always been a fan favorite for those who love the musical and many different versions of it have played throughout the years. Yet, they all have one thing in common and that is the heated chemistry between the two characters once the duet begins.

For me, this duet pretty much sums up what the whole is all about.

Yes, the title of this post should strike fear into the hearts of Hallmark movie watchers. But I can make it worse. Not only was this made by the director of Strawberry Summer, but it was written by the same guy, Gary Goldstein. And you can tell because this movie also has some characters sing When The Saints Go Marching In. On the other hand, he also wrote My Boyfriends’ Dogs, and that wasn’t bad. And you can tell that too because this movie features a scene where the boyfriend dumps his dog on the female lead. Take that scene, repeat it across multiple boyfriends, and make the right guy work at the pet store. That’s My Boyfriends’ Dogs. I’ve seen too many Hallmark movies.

The Wish List opens with a little girl in her room talking about prince charming and drawing in a coloring book that has a prince and princess. Then we see a todo list on a blackboard. Can you smell a movie about a woman who makes a list of qualities that a man must meet for him to be marriage material? No? Good, that means you’re not as jaded as I am. Sadly, that is exactly what the movie is about.

Fortunately for us. This guy is the very first one we meet and he is exactly what she is looking for so the movie ends right there. This truly is the shortest Hallmark movie I know about.

Actually, it turns out he was hiding a lot of qualities that she can’t stand such as smoking and being a kleptomaniac. That is her Americana Xpress card that fell into her soup after he pulled it out to pay for the meal. Of course, Major League (1989) came to mind.

Portrait Of Love had Corbin Bernsen in it as well, which was produced by Larry Levinson and Randy Pope who also produced this movie. Just a coincidence, but a humorous one.

Of course we now get a little montage of obviously wrong guys for her. The guy with piercings and the guy with dreadlocks. This means it’s time for Sarah Fischer (Jennifer Esposito) to break out the whiteboard and write down exactly what she demands in the man she’ll marry: NO exceptions!

My favorite is nice feet, but the best part is something that isn’t on the board. They later show a histogram showing what the probability is that she will eat a whole tub of ice cream. 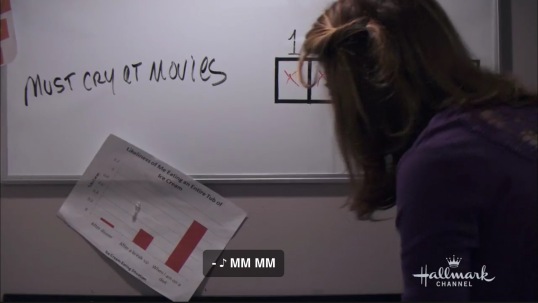 Ah, I love when I can watch something where I can easily take screenshots.

With her firmly set on a path to meeting the wrong guy, she runs into the right guy named Fred Jones (David Sutcliffe) at a coffee shop.

He is the local lovable Barista prick. Seriously, I can’t think of a better way to describe him. While Esposito plays our protagonist in this and is humorous in how she keeps coming back to the coffee shop he works at even though he grates on her nerves. If you are going to watch this movie, then you’re doing so in order to see David Sutcliffe and the wrong guy Dr. Erik Cavallieri played by Mark Deklin.

They are the reason to see this movie. Come to think of it, one of this movie’s problems is that we actually like the two of them so much, we wish she could marry both of them. This is no more evident then when they all go to a night club and it goes all Saturday Night Fever (1977) with the two of them dancing.

They actually have to reach a bit near the end to try and make us really favor the one over the other. And the rest as they say, is Hallmark.

There’s only two more things I want to mention. First, this movie is split screen happy. I blame Pillow Talk (1959) for this stuff. While it works well with the dancing scene, the phone calls and the Barista contest at the end are a bit much. There’s a scene where they are talking on the phone and the center dividing bar shifts at least three times just a little to the left, then back right, then left again. Also, there are times when you’d think it’s just leaving black space on the side because it was 2010 so it was composed for a smaller screen. But then you get a shot like this.

Just know that they go a little overboard with this whole split screen thing.

The other thing is a computer screen goof to look for. It first shows a properly done screen, cuts to one that is a mess, then back to a proper one. Here’s the good one.

And here’s what it cuts to.

Not even remotely close to the awful ones from Strawberry Summer, but I would like to know who this rrowen@mac.com is. It’s a shame that they went through the trouble of reskining Google to this JetSearch.com, but they didn’t change the URL in this shot or the title on the browser tab. One final thing, it’s a little fuzzy, but I’m pretty sure one of those bookmarks is to Hallmark’s website.

As long as you know it’s one of those The Rules type movies and that you are watching it for David Sutcliffe and Mark Deklin, then this one is fine.

Today is Angie Dickinson’s 84th birthday.  One of Angie’s best remembered films is Big Bad Mama, an entertaining and fast-paced gangster film that was produced by Roger Corman.

The year is 1932 and the setting is Texas.  Wilma McClatchie (Angie Dickinson) is a poor single mother with two teenage daughters (Susan Sennett and Robbie Lee) to support.  When Wilma’s bootlegger lover, Barney (Noble Willingham), is killed by the FBI, Wilma takes over his route.  Wilma wants her daughters to be rich like “Rockefeller and Capone” and soon, they graduate from bootlegging to bank robbery.  During one robbery, they meet and team up with Fred (Tom Skerritt).  Wilma and Fred are lovers until Wilma meets alcoholic con man, Baxter (William Shatner).  With Fred and Baxter competing for her affections and her youngest daughter pregnant, Wilma plans one final job, the kidnapping of a spoiled heiress (Joan Prather).

Big Bad Mama is one of the many Bonnie and Clyde rip-offs that Roger Corman produced in the 70s.  (Corman also gave us Bloody Mama and Crazy Mama.)  Big Bad Mama is a typical Corman gangster film, with fast cars, blazing tommy guns, Dick Miller, and plenty of nudity.  Angie was in her 40s at the time and, justifiably proud of her body, her full frontal nude scenes created a lot of publicity for the film.  William Shatner also strips down for the film and his sex scene with Angie is just as weird to watch as you would expect it to be.

The whole film changes as soon as William Shatner makes his first appearance.  He may be speaking with a Southern accent and he may be playing a sniveling coward but he is still William Shatner, with all that implies.  Watching Shatner, it is hard not to imagine that Big Bad Mama is actually a lost Star Trek episode where Kirk goes back in the past and meets special guest star Angie Dickinson.  Far more effective is Tom Skerritt, who is thoroughly believable as a Dillinger-style bank robber.

In the style of Bonnie and Clyde, Big Bad Mama presents its outlaws as being counter-culture rebels.  Every authority figure that Wilma meets — from a preacher played by Royal Dano to a corrupt sheriff to Dick Miller’s incompetent FBI agent — is presented as being hypocritical and arrogant.  Angie plays Wilma as a strong-willed and sexually liberated woman who refuses to allow anyone to tell her how to live her life or raise her daughters.  In the gang, both Fred and Baxter are subservient to her.  Big Bad Mama’s tag line was “Hot lead!  Hot legs!  Hot damn!” and that is a perfect description of Angie Dickinson’s performance.

I love this scene but I have to admit that my heart breaks a little whenever I hear the crowd booing Prokofiev.