Happy Horrorthon! 2008 – Barack Obama was becoming a household name, I still had some hair, and Heath Ledger’s Joker brought the absolute evil of clowns to the silver screen.  I understand that some of you might think that the comic Joker is not a horror comic, but guys it’s got a clown right there on the cover; they are ALL trying to kill you. IT COUNTS!

Brian Azzarello and Lee Bermejo sought to bring Ledger’s Joker into a comic form and dig a little deeper into the psychology of Joker and why someone would follow him.  The story is narrated by Jonny Frost – a small time gangster- who wanted to be big.  Jonny figures that he himself is not larger than life, but by being near bright evil, he too could shine like the moon does with the earth.  He picks the Joker.

Christopher Nolan described the Joker as an absolute. He is an id of Corruption and destruction.  In this story, the Joker has gotten out of Arkham….again.  SIDE NOTE: what’s with Gotham?! They must have the single party liberal governing that we have in Seattle because you’d think they’d have a Three Strikes Rule or the Death Penalty by now.  I mean, why let the Joker continue to keep breathing? I get how Batman has this weird code- he wears rubber, cape, lives in a cave, and is all kinds of weirdo, but why do the rest of Gotham’s citizens have it? Do they not vote? Do they have only one ballot choice? So, the Joker meets Jonny Frost the second that he leaves Arkham and Jonny works as a toady and hanger on for the majority of the book.

Jonny narrates the Joker’s return to power as he reaps through the underworld, but he burns most of his possessions down and kills all of his own henchmen and even shoots Jonny at the end.  Really, the story depicted the Joker as a force of Anti-Creation.  While it was a deeper dive into this Super Villain, it left me wanting because it was told through the lens of this mediocrity Jonny Frost.  It says Joker right there on the cover so you’d think it would be all about the Clown Prince of Crime, but instead it was this tangential view of him.  I would’ve been more captivated by a story just about the Joker without a go-between.

The story was strong and depicting LOTS AND LOTS of gore.  In fact, the Joker kills more people than the Spanish Flu.  He’s Lucifer and Death combined to cause havoc.  In the end, we get the obvious conclusion that he’s just this disease of evil and that Batman is really just a treatment, but not a cure.  It seems that Gotham’s real disease is a soft on crime public policy.

Whether you call him the Caped Crusader or the Dark Knight, it’s hard to believe Batman has been in the public eye for eighty years! Making his debut in Detective Comics #27 (cover dated May 1939) in a story titled “The Case of the Chemical Syndicate” by co-creators Bill Finger and Bob Kane, Batman has gone from mere comic book crimefighter to king of all media! Not bad for a poor little rich kid from Gotham City! 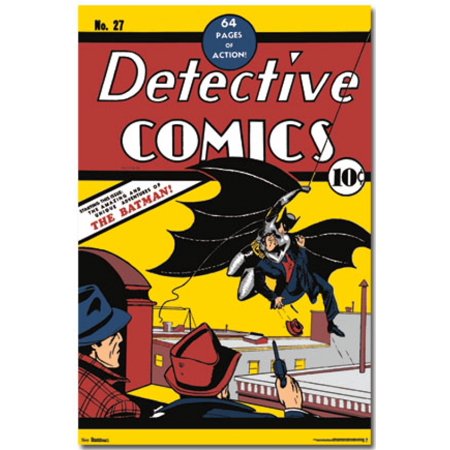 Artist Bob Kane (1915-1998) had been toiling in the nascent comic book field for three years when DC’s superhero character Superman took off like a rocket. Comic houses were scrambling to compete in this new genre of costumed cavorters, and Kane came up with some sketches of a masked vigilante, basing his design on Lee Falk’s Phantom, Douglas Fairbanks’ ZORRO, and the 1930 horror/mystery THE BAT WHISPERS. Kane asked writer Bill Finger…

This 4th of July, while celebrating America’s birthday, don’t forget that there was a time when superheroes not only starred in movies but also made the world safe for democracy!  From World War II, here is a gallery of patriotic super heroes fighting for the freedoms that we enjoy today! 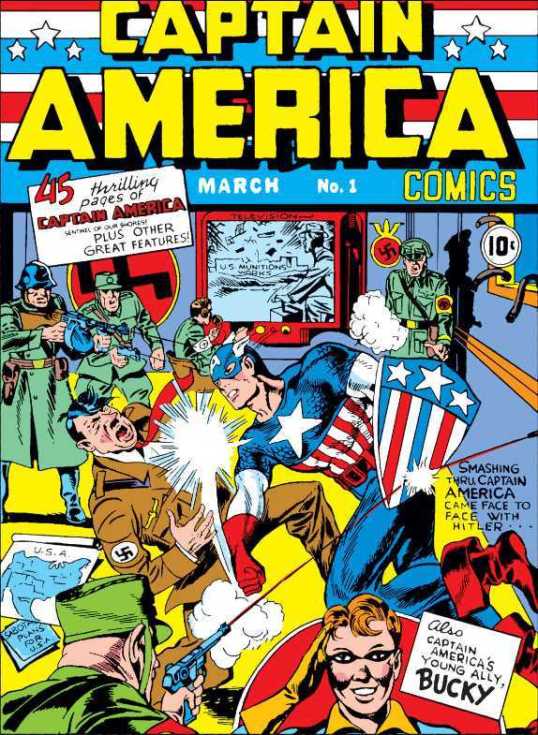 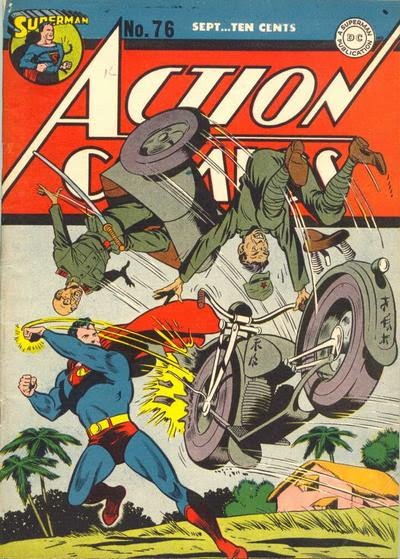 Not even the most powerful of heroes could do it alone.  For that reason, when they weren’t beating the enemy in their own backyard, they were encouraging their readers to support the armed forces by buying war bonds.

Finally, what other way to end this patriotic post than with a musical tribute to the Star-Spangled Man With A Plan?

And to all the real, flesh-and-blood heroes who made the ultimate sacrifice to save the world from tyranny, thank you.

FLASH! This breaking news story is brought to you by Cracked Rear Viewer, serving the film community since 2015!

It’s the story America (and the world) has been waiting for – the hitherto secret link between The Caped Crusader and Secret Agent 007. Proving once again this blog will go to any lengths to bring you the truth behind the Hollywood scenes! Our trail begins in the year 1943. WWII was raging across both oceans, and America needed heroes to defend the homefront. Columbia Pictures secured the rights to the popular comic book BATMAN, and presented a 15-chapter serial starring one Lewis Wilson (1920-2000) as Bruce Wayne/Batman, battling the evil Japanese saboteur Dr. Daka, played by the villainous J. Carrol Naish: 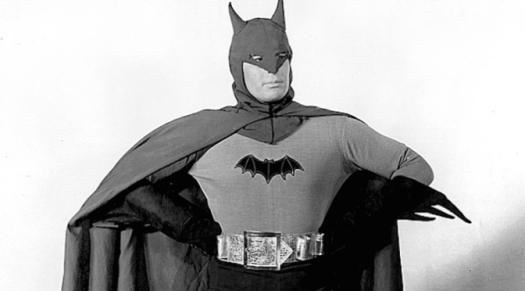 Wilson was married to the former Dana Natol (1922-2004), and in 1942 they had a son named Michael. Though the Wilson’s film career went nowhere, they… 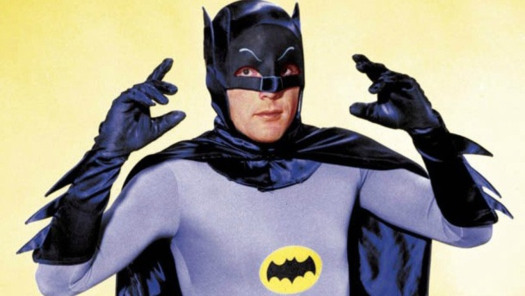 Adam West, who died June 9th at age 88, will never be ranked among the world’s greatest thespians. He was no Brando or Olivier, no DeNiro or Pacino. His early career wasn’t very distinguished: one of Robert Taylor’s young charges in the final season of THE DETECTIVES, Paul Mantee’s doomed fellow astronaut in 1964’s ROBINSON CRUSOE ON MARS, the bumbling romantic lead in The Three Stooges’ THE OUTLAWS IS COMING (1965). Were it not for one role, no one would be mourning his loss today. But that one role, as millionaire Bruce Wayne aka BATMAN, captured the imagination of an entire nation, and remains the hero of an entire generation.

It’s hard to describe to anyone who wasn’t a kid in 1966 just what BATMAN meant to us. The series was a comic book come to life, before comics became “dark and brooding” little psychodramas for fanboys. Comic Books were OUR medium…

Before I start this post, allow me to introduce you to today’s co-reviewer:

This is my young friend James. I first met him when I was working with his mother. He was a shy three-year-old whose father had disavowed him. He was mistrustful of most adults, but for whatever reason, he took a liking to me, and “adopted” me as his best friend. I’ve become somewhat of a mentor to him, and we have lots of fun going places like Chuck E. Cheese, the park, the zoo, and the movies. He’s ten now, and a big Lego fan, so naturally we saw THE LEGO MOVIE together. When I asked him if he wanted to see THE LEGO BATMAN MOVIE, he got super-excited. I must admit I was too, being a huge Batmaniac myself.

So today we went to check it out. James told me his school friends said it was “cool”…

Batman v. Superman: Dawn of Justice has been gathering steam and buzz since it was first announced a couple years ago at San Diego Comic-Con. The film is now just a little over 4 months away from release. The fact that we’re even talking about latest trailers and clips about this film was an accomplishment all on its own.

This was a project that had been talked about for so many years, but never got on track. While some DC fans might decry what I’m about to say I do think they should thank the success of the Marvel Studios-produced films for getting this film on the fast track to being made. It made DC and Warner Bros. realize they weren’t the big bully in the blockbuster block anymore and needed something monumental to catch up.

With Man of Steel dividing comic book fans this film had to be made whether it made sense narrative-wise or not. Another so-so Superman film would not do. So, what better way to juice up the Son of Krypton franchise than by pitting him against DC’s other juggernaut property: Batman.

So, without further ado, here is the latest trailer for Batman v. Superman: Dawn of Justice.

4 Shots From 4 Films is just what it says it is, 4 shots from 4 of our favorite films.  As opposed to the reviews and recaps that we usually post, 4 Shots From 4 Films is all about letting the visuals do the talking. George Barris (11/20/25-11/5/15) was Hollywood’s  car customizer to the stars. Barris is probably best known for designing the Batmobile for the 60’s TV series, but his work showed up in many movies. Here’s a look: 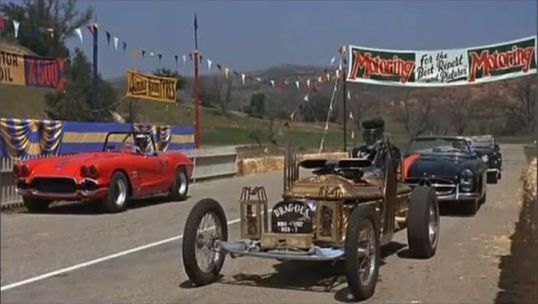 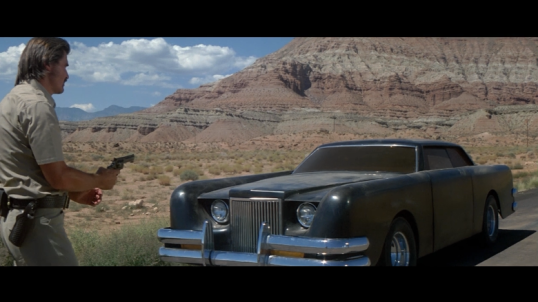 Holy high camp! STARRING ADAM WEST is a fun documentary about the quest to get a star on the Hollywood Walk of Fame for 60s TV star Adam BATMAN West. The film also serves as a biography of the cult actor, from his humble beginnings as a child in Walla Walla, Washington to his rise as TV’s biggest star of the mid-60s, and his fall after being typecast as the Caped Crusader reduced to performing in crappy car shows and carnivals. West later resurrected his career as an ironic icon in the 90s and still does voice work today, notably on the animated FAMILY GUY. Through all the ups and downs, the star has retained both his sense of humor and love of family. An entertaining look at a down to earth guy in the what-have-you-done-for-me-lately world of show biz, STARRING ADAM WEST is playing all this month on Showtime.

A funny thing happened to the Batman v. Superman: Dawn of Justice trailer that was set for a release at a special IMAX screening event next week. No one bothered to tell someone with a cellphone not to secretly record the trailer. A lo-res cam version of the first teaser trailer for Batman v. Superman: Dawn of Justice was leaked just hours after Disney released the second teaser trailer for the upcoming Star Wars: The Force Awakens.

Warner Brothers scrambled to take down the lo-res trailer and made sure to use their power to threaten with legal stuff if people continued to disseminate the illegal recording. During the 24 hours since the leak someone with a much more cooler head over at WB decided to just go the Avengers: Age of Ultron route (that film’s first teaser was also leaked ahead of a planned event) and release the hi-res version of the teaser trailer instead of waiting days for the planned screening event.

So, here’s the very first teaser trailer as Warner Bros. and DC Entertainment finally make their case that whatever Disney and Marvel can do they can do as well.