The Uncanny X-Men #144 finds Scott Summers (better known as Cyclops, the occasional leader of the X-Men) working on a fishing boat in the Florida Everglades.  Scott’s new boss, Lee Forrester, is obviously interested in him but Scott is still mourning Jean Grey.  It’s been months since Jean, consumed by the Dark Phoenix, chose to protect the universe by destroying herself.  Scott has taken a leave of absence from the X-Men to grieve and, as they used to say back in the day, find himself.

When the fear-inducing demon D’Spayre shows up, it not only drives Lee’s father to suicide but it also forces Scott to deal with his deepest fears.  Scott hallucinates the plane crash that led to him and his brother being separated from their parents.  He visualizes the X-Men dead, having been killed by Sentinels.  And finally, in the issue’s most famous scene, he finds himself walking down a church aisle with Jean. 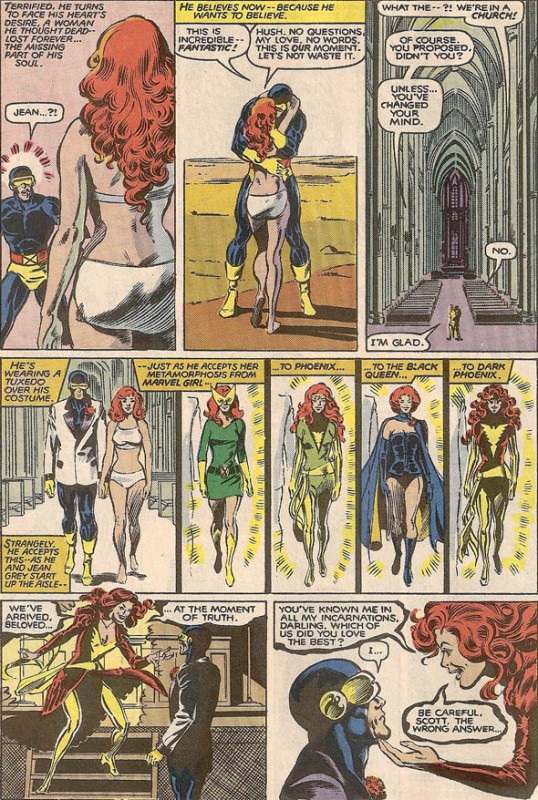 As they walk down the aisle, Jean’s costume changes to reflect all of the different roles that she played as member of the X-Men.  She goes from being in her underwear to being in her green Ms. Marvel costume to being the Phoenix to being the Hellfire Club’s Black Queen to finally being the Dark Phoenix.  When they reach the minister, Jean is dressed as a bride.  When the minister tells Scott that he may kiss the bride, Jean suddenly reaches up and lifts Scott’s visor.  A blast a red energy brings the wedding to an abrupt end.

Eventually, Scott teams up with the Man-Thing (who is Marvel’s version of Swamp Thing) and is able to easily defeat D’Spayre.  Since all you have to do to make D’Spayre go away is refuse to believe what he’s showing you, he is not one of Marvel’s most intimidating villains.  Still, Scott’s church hallucination provides not only a perfect coda for the Dark Phoenix saga but it also shows a comic book character dealing with depression.  That’s an emotion that, until Chris Claremont started writing the X-Men, super heroes rarely had to deal with for more than an issue or two.  Even Spider-Man, with all of his problems and guilt, always kept his sense of humor.  This issue of the X-Men finds Scott deeply mired in his grief.  Even after Scott defeats D’Spayre, the sadness remains but he swears to himself that will not surrender to it.

Of course, the impact of this issue is lessened by the fact that Marvel would later reveal that the Dark Phoenix who sacrificed herself was just an energy force that took on Jean’s memories and personality while the real Jean remained in suspended animation at the bottom of Jamaica Bay.  X-Men #144 is still a good issue and a good example of Chris Claremont’s ability to bring out the humanity in even those with super powers. 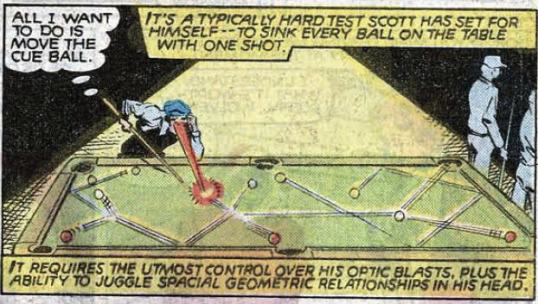 Plus, we learn how Cyclops plays pool

28 responses to “Great Moments In Comic Book History: “Even in Death…””