Marvel Spotlight was a comic books that existed so Marvel could introduce new characters and showcase heroes who were being considered for a full time series.  Think of it as being the Marvel equivalent of pilot season.  In August, 1972, Marvel Spotlight #5 introduced the world to Johnny Blaze, the motorcyclist who once made a deal with the devil.  Johnny Blaze was better known as Ghost Rider!

While riding through Manhattan on his motorcycle, Johnny spots two criminals committing a murder.  He wants nothing to do with it and tries to drive away.  The two criminals follow him and corner him in an alley.  And then this happens:

The rest of the story is simple.  Ghost Rider makes flames emerge from the ground.  The criminals, who are named Clyde and Dingbat, run away.  How does one criminal end up named Clyde while the the other has to settle for Dingbat?  The rest of the issue is a flashback, telling how stuntman Johnny Blaze sold his soul to Satan (later revealed to be a disguise of frequent villain Mephisto) in order to save the life of his cancer-stricken stepfather Crash Simpson.  Though Crash survives the cancer, he still dies when he attempts a dangerous stunt.  Satan still wants Johnny’s soul but is vanquished by Roxanne, Crash’s daughter who is pure of soul and has been reading up on occult practices. However, every night, Johnny is transformed into Ghost Rider.

It’s nothing complicated but, from such humble beginnings, legends are born! 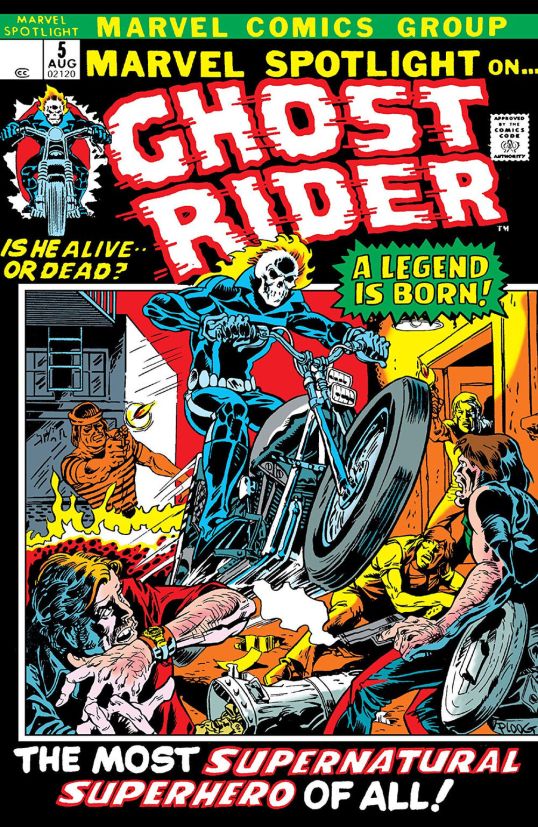 One response to “Great Moments In Comic Book History: The First Appearance on Ghost Rider”