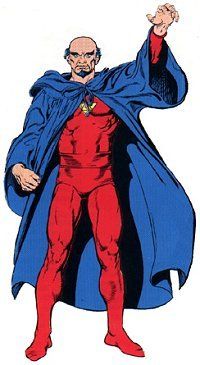 Dr. Druid never got much respect.

First introduced in 1961 and originally known as Dr. Droom (his name was changed to prevent anyone from mixing him up with Dr. Doom), Anthony Ludgate Druid was a magic user who hunted monsters and who had studied the mystic arts with a Tibetan lama.  Later, the lama was retconned into the Ancient One and it was said that Dr. Druid was the runner-up for the position of Sorcerer Supreme.  This was a way of acknowledging an obvious truth, that Dr. Druid was an unsuccessful dry run for Dr. Strange.

With Dr. Druid’s monster hunting activities never becoming popular with readers, he was eventually just used as a host for Weird Wonder Tales, a series that reprinted old monster comics from the 50s.  One look at Dr. Druid at this time shows why he was never able to seriously challenge Doctor Strange for the role of Marvel’s most popular sorcerer. 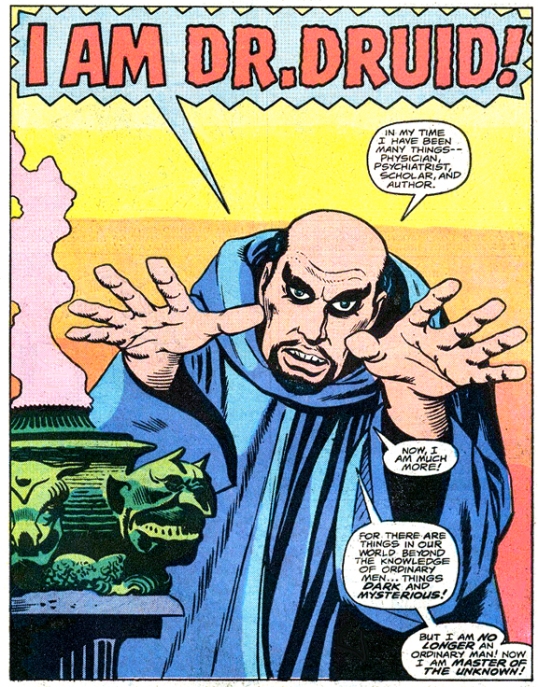 Eventually, Dr. Druid did enter the mainstream Marvel universe.  He joined the Avengers and distinguished himself by getting himself elected Avengers chairman while possessed by a villainous and then disbanding the team.  Even after Dr. Druid got his mind back, no one wanted much to do with him and he faded into obscurity.

He remained forgotten until 1995.  That was when he was resurrected for a series that lasted for four issues.  To this day, there’s debate over whether the series was meant to be a miniseries or a continuing series.  What everyone can agree on is that Warren Ellis radically challenged what everyone though they knew about Dr. Druid. 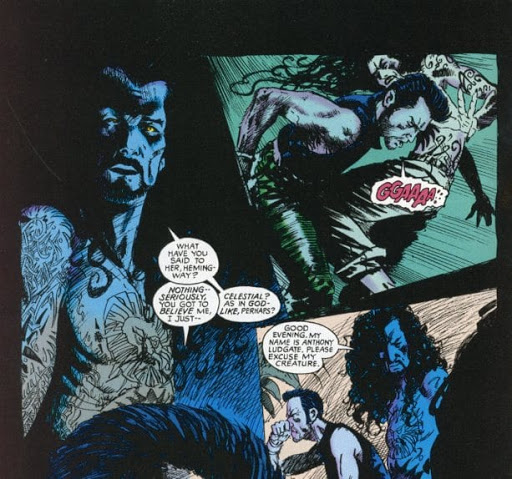 Now, heavily tattooed and simply calling himself Druid, the former hero was an embittered alcoholic who embraced the dark side of his powers.  For four issues, Druid roamed through London and killed almost everyone who he met.  Druid was a dark and brutal series and it’s probably not surprising that it only lasted four issues.

The final issue featured Druid doing his usual killing and destroying until, in the final pages of the issue, Daimon Hellstrom suddenly appeared and announced, to Druid: “You’re a lunatic, a religious maniac, a bad idea. You should have been stamped on at birth. And, in the end, you’re a failure.”  Hellstrom proceeded to burn Druid to a crisp and what I’ve always remembered about that issue were the final lines announcing that Druid’s corpse was left in a trash can.

When you’re a kid just reading a comic book, that’s some pretty heavy stuff!  Those last moments of Druid have always stuck with me.  I’ve always felt bad for Dr. Druid.  He went from being a failed Sorcerer Supreme to a failed Avenger to eventually getting tossed in a trash can.  He’s also one of the few Marvel characters not to return from the dead. He’s gone, never to return.  He probably won’t even get to appear in a movie.

Alas, poor Druid.  He was the Rodney Dangerfield of second-tier Marvel heroes.  He never got any respect.  No respect at all.

6 responses to “Great Moments In Comic Book History: The Death of Doctor Druid”