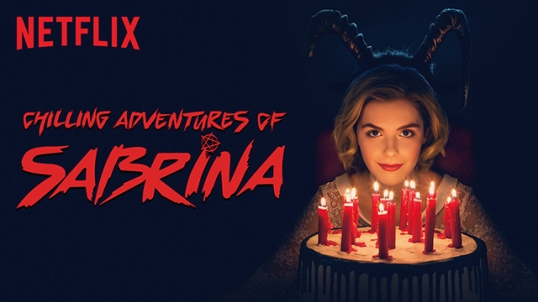 October came early this year! It’s time to once again get down with the baddest witch this side of Massachusetts.  As you know from my previous reviews of this show, I’m a bit biased: I am a fan.  In fact, I was looking forward to this next installment since October. Well, I can say without a doubt that the Season 2 Premiere of The Chilling Adventures of Sabrina, “Epiphany”, was an episode that was made.

A lot of shows go through a Sophomore Slump- the underwhelming return of a beloved show.  By the end of the episode, all the characters that were the most interesting were diminished.  It was still fun to watch and is very entertaining and it’s not Season 2 Stranger Things terrible, but I hold this show to a higher standard: and I mean it!!!!

Season 1 was all about failure and corruption.  Sabrina set out to save her town and herself.  Not only did she endanger her town, she became so corrupted by ego and hubris that the price was her very soul.  It was Shakespearean with a David Lynch vibe.  Season 2 was less than, not to say it can’t or won’t get back on track because it likely will, but this was not great.

The episode was written by Roberto Aguirre-Sacasa (Showrunner) and directed by Kevin Rodney Sullivan who did ….. okay. The direction had the suspense of wet toast.  Not everyone can do suspense and horror and this was sub-awesome.  It sufficed as a recap episode, but not much more.

The plot is that Sabrina wanted to become the “Top Boy” of the witch academy and her love interest Nick is the favorite because he’s a dude.  Suzie who is now Theo wanted to try out for the all-boys basketball team.  I was excited to see them fight the patriarchy and all that, but they did so in the weakest way possible: they cheated.  Sabrina needed to complete three trials versus Nick.  The first one: she won because the Weird Sisters (including Zelda) who for no reason at all like Sabrina now and gave her the answers.  This really bugged because it was not fair to her character.  She’s Sabrina! She’s supposed to be this badass; anyone can win by cheating.

This theme is further reinforced by Sabrina fixing a basketball game so Suzie could win.  Suzie wanted to get on the boy’s team, which is a fair challenge and a good one for this show to tackle, but she was legit terrible at the sport and could only win because Sabrina cheated for her.  This is not empowering. It showed that Sabrina had no faith in Suzie and most importantly it made Suzie look stupid because she never noticed that she went from the beginning of the game from being the Generals to the Globetrotters?!  Suzie was diminished, Sabrina was diminished, and I was insulted by it.  It would have been so much better if Suzie was like WTF?! Why am I so great all of a sudden and then saw that Sabrina was cheating for her, the smile fades from her face, and then Suzie walks off the court.  This would have set up some good conflict with Sabrina, especially since she doesn’t really have any foes right now.

Roberto Sacasa needs to understand the characters he created.  Suzie, Ros, and even Harvey to a MUCH lesser degree were very aware of what was going on around them throughout season 1, making Sabrina’s unnoticed intervention on Suzie’s behalf a lot tougher sell.

There was a subplot of  Evil Three King Demons trying to mess with Sabrina because they were afraid she would ascend.  This could get interesting.  My hopes are high on that one.   This series is still fun, but if it continues down this lazy path it will be more of a guilty pleasure that I watch on the elliptical or something on while I fold the laundry.