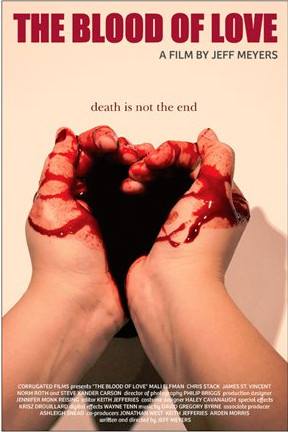 What would you do for love?  How far would you go for the man or woman or thing that you love?  That’s a question that has rested at the heart of many — perhaps almost all — stories.  That’s because love is our most essential need.  It’s something that we spend our entire lives either searching for or trying to hold onto.  And really, is there any greater fear than being alone?  That need to be in love and to be loved is the one thing that everyone has in common.

It’s also the subject matter of The Blood of Love, a short horror film that I was recently lucky enough to view.  Directed by Jeff Meyers and clocking in at a brisk 18 minutes, The Blood of Love opens with Kate (played by a wonderful actress named Mali Elfman) saying goodbye to her husband, Josh (Chris Stack).  Josh is in bed and obviously ill.  He’s also worried about the little black dress that his wife is wearing.  She assures him that it’s just for work and then goes out.

Though Kate does end up picking up a guy once she goes out, she’s not looking for a good time.  Instead, she brings the guy home with her and promptly proceeds to slit his throat.  Meanwhile, Josh is still in bed but now he’s dead.

However, it turns out that Kate has a special machine that will bring Josh back to life.  The machine runs on blood and, unfortunately, Josh is only alive for a day or two before he dies again.  Hence, Kate has to keep finding victims in order to bring her husband back to life over and over again.

However, with each resurrection, Josh is alive for a shorter amount of time.  Finally, Kate makes one final attempt to bring Josh back to life permanently but it leads to a series of twists that neither she nor Josh sees coming.

With its mix of graphic gore and delirious romance, The Blood of Love can be favorably compared to the work of the great French filmmaker, Jean Rollin.  (I am, in particular, thinking of the classic The Living Dead Girl but Josh’s short term amnesia also reminds one of Rollin’s Night of the Hunted.)  The short film plays out with a Rollinesque dream-like intensity and Mali Elfman’s gives a remarkably brave performance as Kate, making her both sympathetic and scary at the same time.  Special mention should also be made of Norman Roth, who plays a mysterious character named Mr. Ashling and gives the type of enigmatic performance that brings to mind the type of mad scientists and magicians who would have been embodied by Lionel Atwill or Vincent Price in the past.

The Blood of Love is playing the festival circuit.  Check out its Facebook page by clicking here.